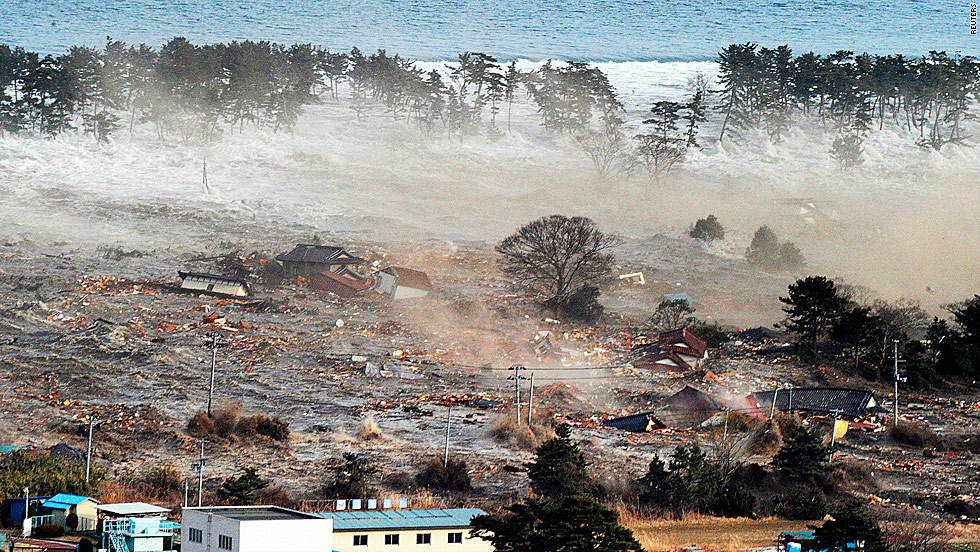 Last week, as I was flipping through the Internet looking for information on all of the storms and flooding we’ve been having, I stumbled upon a YouTube video taken of a tsunami crashing up onto the shores of Japan.  The video was taken from a tall, industrial building, not far from the shore and the footage that was captured was horrendous. I couldn’t imagine how many people had died from that isolated tsunami.

Back in March 2011, a massive earthquake sent a towering wall of water inland from the Tohoku coast. The landscape, after the giant wave had retreated, was unrecognizable. The following is from an essay by Christopher Harding on a website called Aeon.com.

“Television footage filmed from helicopters revealed familiar points of reference suddenly replaced by vast muddy lakes, as the fabric of everyday life – homes, offices, bridges, vehicles – was broken up and sucked out to sea, or else scattered across a new, barely recognizable landscape. People struggled to reach loved ones, first by phone and later by searching through the debris left behind as the waters receded. Some went on looking for weeks, months, even years, as the toll of the dead and missing rose towards 20,000.”

But, according to Harding, many of those 20,000 dead are still making their presence known among the living. “Survivors of the disaster soon began seeing and feeling ghostly presences. Men and women dressed in warm clothes at the height of summer, hailing taxis and then disappearing from the back seat. A toy truck, belonging to a young boy killed in the tsunami, pushing itself haltingly around the room. One woman answered her door to a sopping wet stranger, who asked for a change of clothes. She went off to find something. When she came back, a whole host of people were standing there, all of them soaked to the skin.”

On the website Longreads.com, Richard Lloyd Parry wrote a story about “The Ghosts of the Tsunami” and spoke of a group of monks who drove through the devastated countryside listening to the stories of the survivors. Here are some of their stories:

A civil servant in Soma visited a devastated stretch of coast and saw a solitary woman in a scarlet dress far from the nearest road or house, with no means of transport in sight. When he looked for her again, she had disappeared.

A fire station in Tagajo received calls to places where all the houses had been destroyed by the tsunami. The crews went out to the ruins anyway, prayed for the spirits of those who had died — and the ghostly calls ceased.

A taxi in the city of Sendai picked up a sad-faced man who asked to be taken to an address that no longer existed. Halfway through the journey, the driver looked into his mirror to see that the rear seat was empty. He drove on anyway, stopped in front of the leveled foundations of a destroyed house, and politely opened the door to allow the invisible passenger out at his former home.

At a refugee community in Onagawa, an old neighbor would appear in the living rooms of the temporary houses and sit down for a cup of tea with their startled occupants. No one had the heart to tell her that she was dead; the cushion on which she had sat was wet with seawater.

A few years after the tsunami, Yuka Kudo, a student at Tohoku Gakuin University, interviewed around 100 Ishinomaki taxi drivers to see if they had noticed any strange phenomena or if they had had any experiences with ghosts in Japan following the tsunami.

His account is featured in Wanderingsoulsapp.com,  “Many drivers refused to answer or reacted with anger, but seven came forward to recount their fascinating encounters with ghost passengers to Yuka Kudo.

In all seven cases, the ghost had gotten into the taxi like any other passenger. The taxi drivers started the fare meter, also believing that it was another average passenger. Many even still had their logs of unpaid fares to prove it.

In each account, the ghost passenger told the driver to bring them to a strange place, either a place with very few people or an area devastated by the tsunami. Each time that the driver turned to ask or say something, the phantom passenger mysteriously vanished into thin air.

In one notably chilling account, a woman dressed in a coat got into the taxi and informed the driver that she was heading to the Minamihama District. An area heavily affected by the tsunami, this district was nearly void of human life at the time.

The driver reportedly asked the woman if she was sure that she wanted to go there. The woman asked, “Have I died?” in a quivering voice and vanished by the time the driver turned to look at her.

In another instance, a young man entered the taxi and told the driver he was going to Hiyoriyama, a nearby mountain. He simply pointed in the direction he wanted to go without elaborating on the details. After driving for a short while, the driver realized that the passenger had disappeared.

All of the stories seem to have the same general theme and the ghost passengers are described as being young in all of the accounts.”

A local journalist, Shuji Okuno, has been researching the yūrei banashi, or ghost stories, of relatives bereaved by the 2011 Tohoku earthquake and tsunami. On the website Japan Today,Okuno recounts some of the stories.

“I heard that there were many people in the disaster zone who had seen spirits. Some doctors said 20 percent of their patients saw them [the spirits or ghosts of dead relatives]. I felt that this was a special phenomenon.”

Okuno tells the story of a woman who had lost her much-loved husband in the tsunami. Suffering from severe depression after his death, she had become suicidal, until one day, she saw a vision of her husband, and began to believe that he was watching over her. She became filled with new determination, he says, and decided to live.

Another story included one woman who felt the presence of her son, killed in the disaster at three years old, playing next to her; she said one of his musical toys started to move on its own.”

The website Mysterious Universe also lists stories of the ghosts of those whose lives were cut short n the tragedy. “Witnesses spoke of seeing the phantoms of people lining up at abandoned supermarkets and shops that had been left in shambles, the ghosts of people lingering around places they had frequented in life, and specters skulking about the barren, jagged rubble that had once been their homes. There have also been terrifying visions of ghostly figures frantically running inland as if from the waves, only to dissipate into thin air as they flee. Many people claimed that they had been approached by people they had known in life but knew to be dead, who spoke to them briefly or asked for help before fading away right before their eyes. One elderly woman from Onagawa who had died in the disaster had the rather unsettling habit of showing up at a refugee camp for a casual cup of tea, with witnesses claiming that they hadn’t had the heart to tell her she was dead. She apparently would leave behind wet splotches of seawater. Some even complained of sinister presences sitting heavily upon their chests as they lie in bed at night.”

“Other ghostly tales plagued the area for some time. Offices, homes, and shops were said to be haunted and frequented by the dead. Emergency services, who were in overdrive trying to provide relief to the survivors, reported being called to locations that had been long destroyed and abandoned, with no one even sure of how anyone could have made a call from the spot in the first place. People all over the area frequently complained of having ghosts cause mischief in their homes or suddenly appear to startle or frighten.”

Kunio Yanagita was one of Japan’s first folklorists, he collected tales from the village of Tono, which is in Japan’s northeastern Tohoku region. The book was called “Legends of Tono” and it was published in 1910.  Here is an excerpt from that book:

“It was a moonlit night in early summer, about a year on from the great tsunami. As waves broke gently on a beach half-obscured in fog, Fukuji could just about make out two people walking along: a woman and a man.

Fukuji frowned. The woman was definitely his wife.

He called out her name. She turned and smiled. Fukuji now saw who the man was, too. He had been in love with Fukuji’s wife before Fukuji had married her. Both had died in the tsunami.

Fukuji’s wife called to him, over her shoulder: ‘I am married now, to this man.’

‘But don’t you love your children?’ Fukuji cried out in reply. His wife paused at that and began to sob.

Fukuji looked sadly at his feet for a moment, not knowing what more to say. When he looked up, the woman and the man had drifted away.”

Yanagita said that this was a true story, not just a legend.  Another story added to the hundreds or thousands of new ghost stories, that populate the islands of Japan.