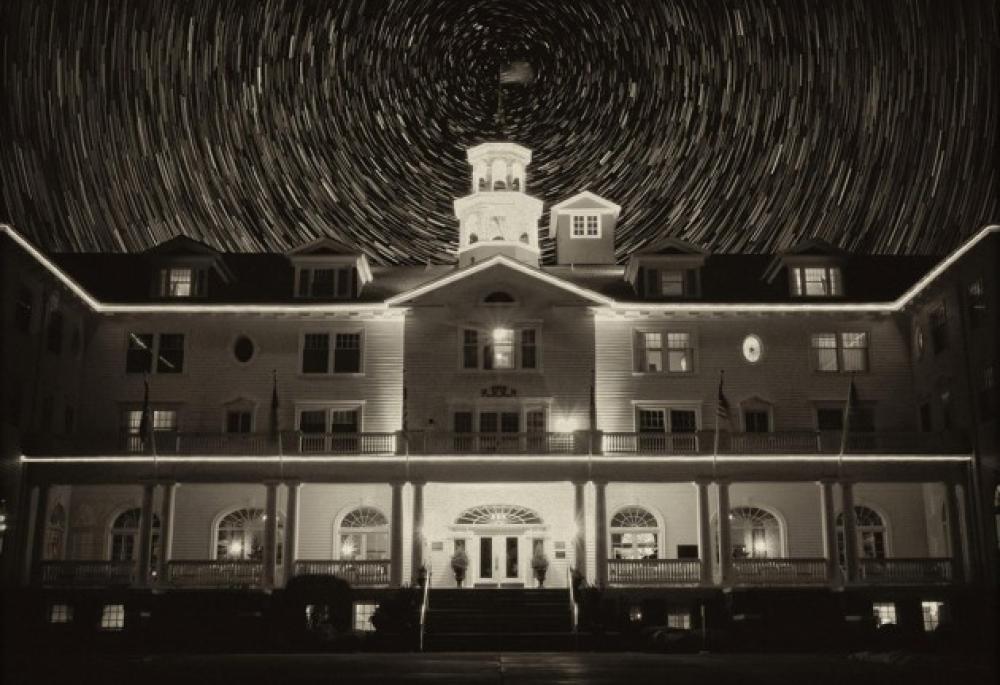 Many authors have heard the advice “Write What You Know.” But how many authors who write horror or paranormal stories can actually apply that mantra to their lives? Probably more than you think.

According to Amy’s Crypt, the Kings had an unusual stay at the hotel. “King and his wife arrived just before the hotel shut down for the Winter months but were luckily able to spend the night. They were placed in the presidential suite (#217), the only room left with clean bedsheets. Since the hotel was in the process of shutting down there were no other guests checked in and the King’s had the entire hotel to themselves.

Stephen King spent a great deal of time drinking whiskey at the Stanley’s famous bar before taking a walk to explore the hotel and retreating to his room. It is fabled that he ran into two children on the fourth floor. A sight he thought was strange since there were no other guests staying at the hotel. He was to find out soon after that these children also did not belong to any of the staff members working at the premises.

After retiring to his room and falling asleep King has a dramatic dream which caused him to wake in fright. He had noticed a fire hose in the hallway just before entering his room and dreamt that his young son was strangled to death by this very object. After waking and feeling quite spooked, King got up for a cigarette. By the time he had finished that cigarette he had the story for his best-selling and now movie adapted novel, ‘The Shining’, fleshed out in his head.

Actually, the Stephen King Official Website tells a similar, although slightly less spooky rendition of the story. “In late September of 1974, Tabby and I spent a night at a grand old hotel in Estes Park, the Stanley.  We were the only guests as it turned out; the following day they were going to close the place down for the winter. Wandering through its corridors, I thought that it seemed the perfect—maybe the archetypical—setting for a ghost story.  That night I dreamed of my three-year-old son running through the corridors, looking back over his shoulder, eyes wide, screaming. He was being chased by a fire-hose. I woke up with a tremendous jerk, sweating all over, within an inch of falling out of bed. I got up, lit a cigarette, sat in the chair looking out the window at the Rockies, and by the time the cigarette was done, I had the bones of the book firmly set in my mind.”

He wrote what he knew – or what he’d experienced.

In my first book, Loose Ends – A Mary O’Reilly Paranormal Mystery the story at the very beginning of the book, when a blood-dripping, headless ghost walks up the stairs to Mary’s bedroom and confronts her, is actually a retelling of a story that happened to one of my relatives.

I wrote what I knew.

Irish author Caroline Mitchell began her writing career following a terrifying paranormal experience.  She recalls the tale in the Independent.ie : “The mother of four received a call at work from her husband, Neil, who was disturbed by crashing and banging upstairs in the house, even though nobody else was at home.

It was the beginning of a four-year ordeal which saw the activity range from objects moving on their own to Neil being physically attacked and scratched by an unseen force.  The family also heard growling in the house and were forced to flee in terror on several occasions.

Over the course of that time the house was blessed by priests, but this had little effect so eventually they requested an exorcism from the Vatican. The turning point came when they visited a local priest at his house, which was attached to the church.  While they were there, they heard heavy footsteps upstairs.

Speaking to Derek Mooney on The Ryan Tubridy Show on RTE Radio 1 this week, Caroline revealed, “The priest asked, ‘What’s that?’ and my husband said, ‘That’s part of what’s going on with us at home.’  The priest turned white as a ghost and said, ‘That should not be happening here’.”

It took a year to have the exorcism approved and carried out at the family’s home, but thankfully it quietened the activity significantly.  Whatever is causing the issue appears to be attached to Neil and the family have found that removing their focus from any mild activity that does occur prevents it from escalating.

Given the litany of incredible experiences the family had over the course of those four years, and the 30 other people (including one of Caroline’s fellow police officers) who also witnessed troubling incidents in the house, there has been huge interest in the story.

Tired of repeating their terrifying tale to people, Neil suggested that Caroline write it down and her first book, Paranormal Intruder, was born.

“I don’t even tell everyone that I started writing because of those experiences – it takes so long to explain,” Caroline tells Independent.ie.  “I just say, ‘oh yeah, I just got into writing’ because once they hear that they don’t hear anything else!

“It was just a horrible experience and certainly a weird way to get into writing. I self-published Paranormal Intruder in 2013 because I didn’t expect a career as a writer, but it sold really well and even now it’s still a best-seller in that category.”

She wrote what she knew.

Sir Arthur Conan Doyle, the brilliant creator Sherlock Holmes became obsessed with the paranormal. He actually wrote about an encounter he had with a spirit in his 1930 book, The Edge of the Unknown.  Mentalfloss.com relates the story. “In one anecdote, Sir Arthur described waking up “with the clear consciousness that there was someone in the room, and that the was not of this world.” His body was paralyzed, but he could still hear footsteps echoing across the room. Then, Sir Arthur said he sensed a presence leaning over him, and heard them whisper, “Doyle, I come to tell you that I am sorry.” Moments later, the mysterious visitor vanished, and Sir Arthur’s body unfroze.

Sir Arthur’s wife slept through the entire thing, but Doyle was convinced that the experience wasn’t a dream. He believed the ghost to be “a certain individual to whom I had tried to give psychic consolation when he was bereaved.” The man had turned down Doyle’s offer “with some contempt and died himself shortly . It may well be that he wished to express regret,” Doyle wrote. As for his sleep paralysis, the author believed that the spirit needed to borrow power from a living person to appear in the physical world, and it had chosen him.”

He wrote about what he had known.

William Peter Blatty is the author who is famous for writing the book The Exorcist. But one of his more recent books, Finding Peter, exemplifies more of writing what you know. Peter Blatty was William’s son. He died of sudden viral myocarditis when he was 19.  This book, actually a memoir, recounts messages they feel they’ve received from Peter since his death.

This excerpt is from an article in The Washingtonian: “Blatty says he and Julie (his wife) aren’t because they recognize traces of the boy they loved. “There was something unearthly about Peter,” Blatty writes. “He was mystery enough in himself.” As a toddler, he’d say things that startled his parents, such as telling his mother, “Do you know why I came here, Mommy? I came here to help people.” He asked Blatty, “Daddy, how do you learn?” Blatty said through reading and experience. Peter replied, “That’s not how I learn. I learn from the sky. God teaches me.”

Following Peter’s death, a classmate planted a dogwood tree in the Blattys’ yard as a memorial. One day shortly after that, Blatty asked for a sign from his son. On the morning of Peter’s January 7 birthday, he saw that the tree had sprouted buds. It then began a slow death. The same fate awaited a halogen lamp in Blatty’s study, which one day flared on for 20 seconds, then burned out. Why these events ended with such finality is part of the mystery not to be taken lightly, Blatty believes: “Petey was a very special person, and there were never halfway measures with him. It’s a powerful mojo that we must invoke with care.”

In the Blattys’ eyes, the messages’ mundane nature, along with their continuation for more than eight years, only confirms their validity. Blatty lost a religious medallion of Peter’s that he had taken to wearing after his son’s death. He trusted Peter would help him find it, and on the day he was to give a speech—Blatty dreads public speaking—he found the medal on the shower floor. For Blatty, it all points to one thing: “He wants to reassure Julie and me that he is still here with us.”

Likewise, Blatty wants to reassure his readers—especially those in despair over the loss of a loved one—that death is not the end, and to share this news with the world, the same way he wanted to share The Exorcist’s argument for God. Since the publication of Finding Peter last spring, he says he has heard from many of the bereaved who have found solace and comfort in his account. As it happened, the memoir accomplished something else: It reminded people that he wasn’t just a guy the media hounds hunt down every Halloween.”

He wrote what he knew.

2 thoughts on “Write What You Know”