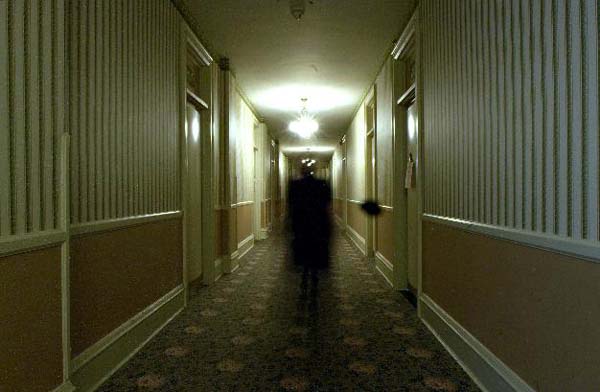 A couple of weeks ago, I was invited to speak to a group of young adults about ghosts. I told quite a few stories, shared my own experiences, and then opened it up for questions. A young man raised his hand and asked me what made me believe in ghosts. He said that he’d never had an experience and he was quite skeptical about the whole idea of paranormal occurances.

I explained to him that it didn’t bother me to hear someone say they were skeptical, I felt that they had just not had an experience yet. But, because I had seen and heard things throughout my life, I knew that paranormal experiences were real. The funny thing was, his dad was also at the event and afterwards explained to me that he had experienced quite a bit of paranormal phenomena.

So, it got me wondering – what was it that helped you to believe?

I tried to look back in my life for that pivotal moment when I believed, but I can’t remember ever not believing. Although, as I said, I’ve had a number of experiences that have reinforced my belief over the years.  Since I was no help to myself, I thought I’d check out Reddit and see what made others believe…

This was a post by MuddaFrmAnnudaBrudda, from four months ago:

“Okay, this happened when I was six and I am nearly 50 now so my memory is a little hazy. I had a friend the same age as me called Kelly. We used to hang out together with other children who lived in our block and local area.

One afternoon Kelly knocked on my door, I answered, and she asked if I could go to the corner shop with her to get some bananas so that we could make a milkshake. Before I could answer my step-mother called down the stairs to say I had to clean my room and was not going anywhere. Kelly kind of shrugged and said she was going anyway and that was the last I saw of her.

In the early hours of the morning, I heard a noise outside of my bedroom window…a kind of intermittent moaning. When I looked out, I saw a policeman leaning against the wall sobbing, and being comforted by another policeman. I watched for a while and then went downstairs. My dad told me Kelly had been found dead in the copse in front of our block. I later found out Kelly had been murdered by one of the older boys who hung out with us.

I had to give a statement as I had seen Kelly the day before. Later, the police told us that Kelly had been killed hours before she knocked on my door, and that my recollection of events was impossible. The man who owned the corner shop said Kelly had never come in to buy bananas.

I’m pretty sure the police thought I was lying and that my step-mother was either lying as well or mistaken about what she’d heard.

From that time onwards, I have believed that Kelly came to visit one more time before she left for good, and since then the idea of the Paranormal has just seemed normal.”

This one is by Ninovan:

“My childhood home is haunted.

Where my house is, there used to be another house. It burned down, and the father of the family who lived there died in the basement during the fire. The family sold the land, and the house was cleared away and a new house built over the old basement. My grandmother, who lives in the same town, knows the family.

Anyway, my parents bought the new house when I was a toddler and we’ve lived there for about 20 years. The ghost of the guy who died in the fire, named Charlie, lives in our house, and it’s pretty obvious.

My mom says that once when she and my dad were arguing, she took to the bedroom to cool off. She said, “Charlie, I wish you could knock some sense into him!” Not five minutes later, my dad starts swearing from the living room. The shelves above his chair had fallen and knocked him in the head. They’ve never fallen before or since.

Any animal we have — a couple dogs when I was a kid, my cat now — will stare down the hallway for long stretches of time, then go bananas chasing something from the living room at one end to the bedrooms at the other, like they’re playing with someone.

I personally have heard footsteps — big, heavy footsteps, like someone wearing work boots — walk up and down the hallway, especially at night. It scared me as a kid, but now I just take it as Charlie checking on our safety.

The most concrete evidence for me was the time Charlie scared something off. My bedroom was always the coldest room in the house, and often I felt uncomfortable in there, like I was sitting next to someone who disliked me. One day, I went to grab clothes for a shower and walked right into a wall of evil halfway down the hall. I can’t describe it fully — nothing looked different, I just felt like I had physically crossed a barrier into a forcefield of hatred. I knew without a doubt in my body that I was in danger, and without thinking, I hauled ass to the opposite end of the house, to the kitchen.

I stood at the stove, shaking — I was about 14 — afraid to look down the hallway in case I saw whatever was down there but afraid that if I didn’t look, it would sneak up on me. I eventually convinced myself that I was being a baby and started slowly through the dining room and towards the hall, afraid the entire time.

All at once, I felt a strong breeze blow by my left side, going down the hall towards my room — like how it feels when someone runs by you and barely avoids running into you. And I thought for a second that I heard a man’s voice. I continued down the hall, and I couldn’t feel the evil anymore. I went into my room, and it felt lighter and more comfortable than it ever had in my life. I thanked Charlie, and from then on, I’ve never felt that uncomfortable feeling in my room. I think he protects it now.

But yeah, growing up in a haunted house is pretty convincing, in my opinion.”

This one was slightly freaky, but the response below it (that I’m going to share) is even freakier.

“When I was a kid I had an imaginary friend called Mr. Johnson. I would talk to and play with him all day, and my parents mostly ignored it because it seemed harmless. Well one day while my mom was out watering the yard, a neighbor walked by and started a conversation. He said he was surprised that she moved in there because it was supposedly haunted, and that the previous tenant had died in the house. His name was Mr. Johnson. After that, my parents got really uncomfortable when I’d talk to my friend and I eventually stopped interacting with him.

I also have a very vivid memory of talking to something on a curtain rod in the same house. I can’t remember what we were talking about, only that its voice was kind of raspy and weird. When my dad came in and asked what I was doing I remember the thing saying “Say I’m God.” So… I told my dad I was talking to God and thought the freaked out look he gave me was hilarious, even though I had no real understanding of what God was or why that was such a strange thing to say.”

Freaky right? Well, here’s the response I promised you by timechuck:

“Years ago, I was talking to my youngest son about his imaginary friend. He told me that his friend didn’t like me at all, I asked if his friend was here right now, my son looked me straight in the eye and said “He says to say No.””

Okay, now would be a good time to move out of that house!!!!

This one is another house that I would move away from.  It’s a story by Lord_Waffles:

“I once got a job to install a security system in an old house. The family that moved in there had a little 5-year old-ish boy. The boy was playing around by himself and I thought that he would sometimes ask me random questions.

I answered one of his questions and I remember him telling me “Oh sorry, I was just talking to my friend!” The mother poked her head in and told me that he had found a new friend since they moved in. She then leaned in closer and jokingly said: “It’s actually kind of creepy.”

Well later that day the boy was in the kitchen playing and he was trying to reach a bag of chips on top of their fridge. I told him he should probably get down off the counter and I could get them down for him. He proceeds to get down and say, “Oh my friend will get it.” I just kind of shrugged it off and went back to working on running the cable through the wall.

All of a sudden, the bag of chips drops onto the floor. I turned around thinking the kid must have gotten back on the counter…but instead was on the floor picking up the chips.

He gave me a look and said, “My friend accidentally knocked them off.” I asked the boy where his friend was now, and he points on top of the fridge and said, “He is right up there smiling at you.”

I never got such a freaky chill in my life.”

So do you believe?

7 thoughts on “What Made You Believe?”