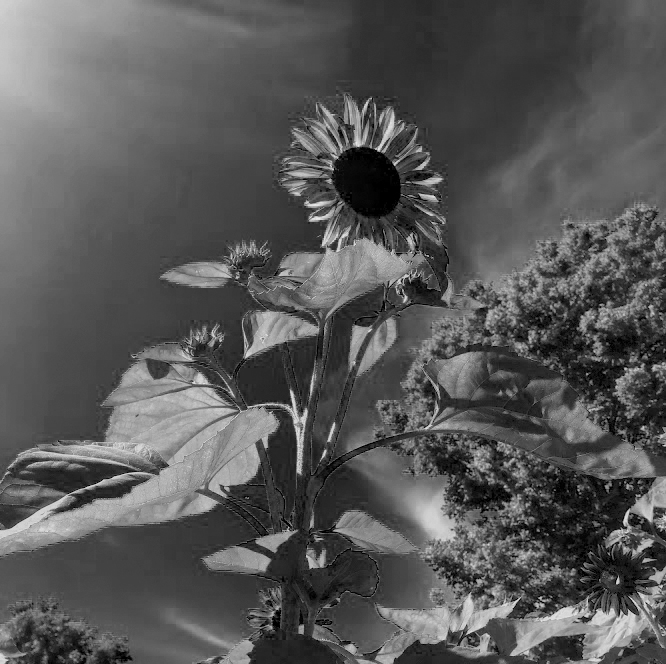 The idea for this blog began when I posted some photos of sunflowers from my garden on my Facebook page. One of my readers responded that she thought that sunflowers were creepy. I had never considered that – and I wondered how many others felt the same way.

To my great surprise, there is actually a phobia about the fear of sunflowers called helianthophobia. On the webpage “She Said Sunflower.com” – the blogger writes that there can be a fear of the sunflower bloom itself because the large yellow petals are engaging, but they then draw our attention to the large, brown center disc. Some compare this disc to a large, dark vortex that sufferers feel they’re being sucked into.  The size of the sunflowers can also trigger a response of dread. They can be quite daunting and surreal.

There’s also the human-like characteristics of the sunflower, they are tall and are almost akin to seeing a giant standing before you.  They also follow the sun during the day and then return to their original position at night, this movement can also cause anxiety. Why is that sunflower watching me?

But we really don’t have anything to fear from plants, right?

I mean, phobias are one thing, but actually harming us, (other than a hefty dose of poison ivy or poison oak) we can agree that plants are fairly harmless. Right?

Well, not so fast.

According to an online BBC article about the pitcher plant, we learn that “recent studies are revealing there is much more to these huge meat-eating plants, which can grow stems up to six meters long, flowers that are one meter tall, traps more than 40 centimeters deep, and can hold two liters of flesh-digesting liquid.

While most devour insects, some have more specialized tastes. Others collaborate in odd ways with animals, which use them as a place to stay. A few have even harnessed the power of bacteria to better digest and consume the flesh of their victims.”

I bet you won’t find that description on any of the pages of your local florist.

The Museum of Unnatural History shared an interesting scenario, “The jungle seems a tangle of vines and stalks and leaves. The only way you move through the impenetrable wall of green is with a machete. Hacking with the knife, you can slowly make some progress, but the work is exhausting. Finally, you seem to be reaching the jungle’s edge. Only a few heavy vines block your way. You bring back the knife to swing at one, but your native guide stays your hand.

“No, sir! Do not touch that one! Go around! It is dangerous!”

You swing your machete and it strikes the three-inch-thick vine, slicing it neatly in two. Suddenly the jungle around you comes alive. The vines in the nearby trees start moving. You step back, but it’s too late. One wraps around your ankle. You raise your knife to cut through it, but before you can swing, another vine twists around your arm, stopping it. A third vine, as thick as a fire hose, curls around your waist and you are knocked off your feet. It drags you into the thick underbrush. Suddenly the jungle parts up ahead and you see an orange pod as tall as a man. It opens and you are thrust into its dark interior. You find yourself waist-deep in a sticky liquid that burns your skin. As the leaves close up behind you, trapping you, your guide’s voice can be heard…

“Sir, you should have listened!”

Time to get yourself a new guide! Well, actually, I suppose it’s a little late for that!

But these plants, unlike the infamous Audrey II in “Little House of Horrors”, don’t really munch on people for snacks. They are merely another version of flypaper, they trap insects and slowly digest them for nourishment. At least that’s what Darwin thought. The famous naturalist, geologist, and biologist originally called these kinds of plants “flora insectivores.” Raid with roots.  However, later scientists decided that the plants ate enough other little animals (warm-blooded) that the term carnivore should be used.

A much-disputed account, by German explorer Carl Liche, has us wondering if little mammals are the only prey for these plants.  This is also from The Museum of Unnatural History.

“In 1878 German explorer Carl Liche witnessed a horrifying ceremony. He watched as the Mkodo tribespeople of Madagascar sacrificed one of their own people to a man-eating tree. Prodded by javelins, a young girl was forced to climb the giant plant which resembled an oversized pineapple. The top was fringed with long hairy green tendrils and a set of tentacles surrounding a pool of honey-sweet fluid. As she reluctantly drank from the pool, in Liche’s words:

The atrocious cannibal tree, that had been so inert and dead, came to sudden savage life. The slender delicate palpi, with the fury of starved serpents, quivered a moment over her head, then as if instinct with demoniac intelligence fastened upon her in sudden coils round and round her neck and arms; then while her awful screams and yet more awful laughter rose wildly to be instantly strangled down again into a gurgling moan, the tendrils one after another, like great green serpents, with brutal energy and infernal rapidity, rose, retracted themselves, and wrapped her about in fold after fold, ever-tightening with cruel swiftness and savage tenacity of anacondas fastening upon their prey.”