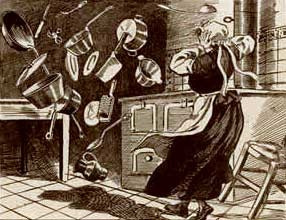 Several forums I follow about the paranormal have had discussions about the increase of activity since the lockdown. Is it because we’re home that we’re just seeing paranormal activity that just goes on when we’re not there? Is it because the ghosts are getting tired of us hanging around the house all day?  Or is it because our own emotions are sending out waves that are inciting our spirited friends to respond?

Some of the activity that has been recorded is about things moving, doors and windows slamming, and people being touched. Scary indeed!  It sounds very much like poltergeist activity.

A poltergeist is a spirit known for making physical disturbances like loud noises or things being thrown around. The word is German, meaning poltern – to make a sound or rumble – and Geist – a ghost or spirit. So, it’s a noisy spirit or a loud spirit.

One of the most famous cases of a poltergeist haunting happened in 1772, in Stockwell, England. Most of us expect hauntings to happen at night, but this experience began at 10 a.m. with clocks, lamps, and other objects crashing to the floor.  The owner of the house, Mrs. Golding, was so terrified she ran from her home and sought shelter in the home of her neighbor.

At first the crashing was attributed to a structural problem in the house, but that explanation was quickly tossed away when the same kinds of problems happened in the new home Mrs. Golding was inhabiting.  Poor Mrs. Golding couldn’t escape the ghost and the town of Stockwell started to gain a strange reputation.

According to the website Gizmodo UK, the events were growing far beyond a few broken lamps. “furniture began dancing around the room, with flocks of people coming to visit to see the strange event. Some of the higher classes went so far as to send their servants on their behalf, perhaps out of fear of being pelted by a passing cup.

These ostentatious spectral displays might have been great for tourism in the area, but they were not good news for the nerves of the victims. This was especially true of Mrs. Golding, who had fainted at seeing the furniture dance. The situation then became more like a horror story than ever in its violence. After a surgeon drew some blood from Golding and stored it for examination, by some unseen force the blood was emptied out and the container smashed.”

Unfortunately, Mrs. Golding’s reputation suffered greatly. She was accused of everything from lying about the events to doing something horrible in order to incite the wrath of a spirit.

The events stopped as quickly as they began. Many believe it was an elaborate hoax perpetrated by Mrs. Golding’s maid, Anne Robinson. But nothing was ever determined to corroborate that theory.

Poltergeist or scheming maid – the world may never know.