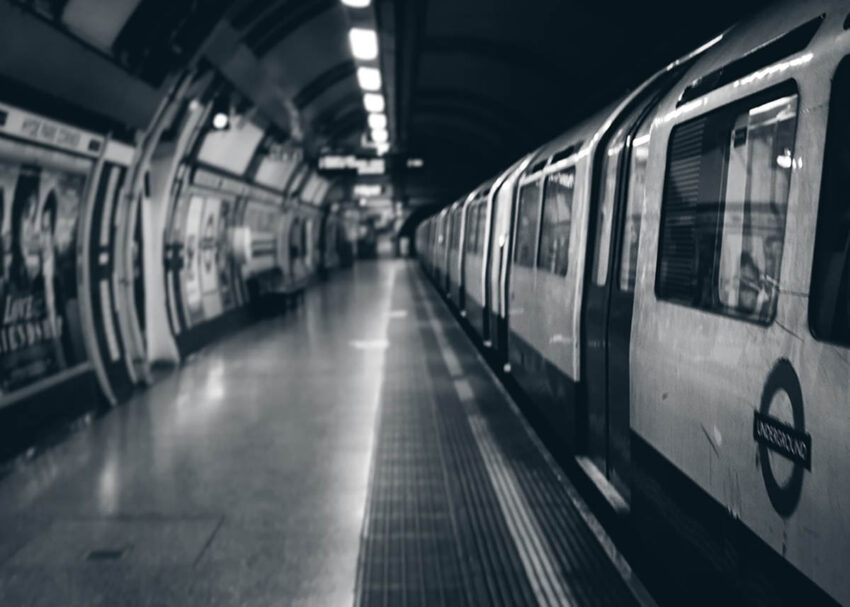 Welcome back to the London Underground. Last week we were able to investigate three stops – The Bank, Bethnal Green, and Farringdon. This week we’re going to explore a few more stops and I promise, each one will be as scary or scarier than the last one.

Let’s start at the Liverpool Station.

Remember the movie, Poltergeist where the housing development was built over an old burial ground? That’s never a good idea, right?

Well, the Liverpool Station, unfortunately, was actually built over an ancient burial ground. And, not surprisingly, is one of the most haunted of the London Tube stations.

The Walks.com website tells us about the ghost of a worker in white overalls. “This ghostly apparition appears at the station as if on his way to work, wearing his overalls and carrying his box of tools. When Liverpool Street was being updated in 2000, the worker in white overalls was apparently captured on CCTV, yet when Underground staff went to find him, he had vanished into thin air.”

But that’s not the only featured ghost at the station. The website Encoretickets.com adds one more ghost. “Since the station opened in 1874, terrifying events have happened at the station. The area is haunted by Rebecca Griffiths, a patient from the nearby Bethlem Royal Hospital in the late 19th century. It’s reported she still haunts the surrounding areas trying to find a coin that she previously dropped.”

The next stop has the coolest name – The Elephant and Castle stop on the Bakerloo Line. According to Walks.com, “…Drivers report seeing a young woman getting on the train. But they never see her again. What they hear though, are running footsteps, tapping noises, and the slamming of doors. Is it the infamous infrasound that the London Underground is known for, emitting sound below the range of human hearing, and believed to cause all manner of unpleasant effects on the human body, from disorientation to nausea, or is it the girl on the train?”

The website Spookyisles.com adds to the story, “Staff working night duty have reported the sound of footsteps ascending the stairways leading from one of the platforms to the booking hall.

When investigated there is no one to account for them.

A night porter on late shift duty reported that the door of his room would often open and close on its own.

Whenever he looked out to see if anyone was there, the platform was eerily deserted.

Other staff, using the porters’ room at night also had the unnerving experience of hearing the sound of footsteps walking along the platform and halting outside the room.

A few seconds later the “tap, tap, tap” of someone knocking from outside was heard.

Yet when the porter opened the door there was no one to be seen.

The man was so disturbed by his experience that he refused to work at the station again.

It is thought that the footsteps could be the ghostly echo of a young woman whose apparition has been seen by both staff and passengers.

The young lady has been observed entering the train’s carriages but is never seen leaving.”

The final stop on this week’s trip is just beyond the Elephant and Castle – it’s the Kennington Loop.

Now, the loop itself is not a stop, it’s a turnaround at the end of the line. The train stops at Kennington, all of the passengers disembark and then the conductor and staff continue on in the train as it loops around and comes back to Kennington Station.

Well, almost all of the passengers disembark.

Buzzfeed.com (https://www.buzzfeed.com/beckybarnicoat/incredibly-creepy-stories-about-the-london-underground ) shares their story of the Loop. “The Kennington Loop is a section of track where empty Northern line trains change direction. One day while waiting in the loop, a driver heard the interconnecting doors slamming far down the train. Then another set slammed, closer this time, then another, with the sound approaching the driver’s compartment, carriage by carriage. The driver searched the train to find half the doors were open, but no one was there.

The story goes that a man once died trying to board the train in between the cars at Kennington. He was dragged into the loop and killed.”

Spookyisle.com has a slightly more detailed version of the haunting, “Kennington station forms part of the Northern Line. It is also the terminus for the Charring Cross branch line. To prevent the need for shunting, terminating trains proceed into what is known as the Kennington loop.

This is essentially a continuation of the track which allows trains to carry on and double back to a platform facing in the right direction for the return journey.

Passengers are not allowed to remain on the train as it makes its way around the loop, and guards, along with platform staff check all carriages to ensure they are empty.

One night in 1980, a train, which had entered the loop, was held at a red signal before it could proceed into the station.

It was during that time that something extraordinary occurred.

As they waited, both driver and guard heard the unmistakable sound of the trains interconnecting carriage doors open and slam shut.

The two men naturally assumed that the other was making his way through the train to report on something. Yet, when they looked, the carriages were empty.

This was strange as both knew they were the only people on board.

The incident was reported, and to their surprise, the two men learned that other train crews had also experienced the opening and slamming of the carriage doors.

Soon train crews were relating the tale of the passenger who tried to board the train as it was moving by way of the connecting doors.

Tragically he lost his footing and was dragged into the tunnel and killed.
A ghost who will forever haunt the Kennington loop?”

A part of me really wants to visit London and ride the Underground, and another part of me, after reading these stories, is thinking – no way!

How about you? All Aboard?