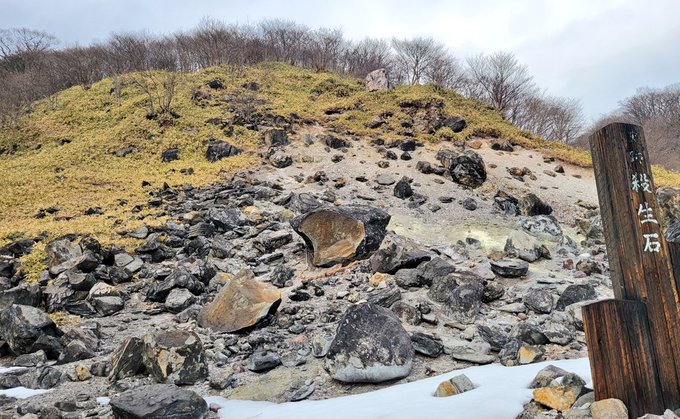 Remember at the beginning of the year, we all looked back with a sigh of relief that we made it through 2021 and said of the upcoming year, “Well, we survived 2021 – how bad could 2022 be?”

So, amidst all of the other terrible, horrible, no good, and very bad things that have happened to us this year, you might not have heard about the one that occurred on March 7th in Nikko National Park, about 100 miles north of Tokyo.  According to a New York Times article by Mike Ives and Makiko Inoue, the killing stone – a centuries-old volcanic rock that was about six feet tall and 26 feet in circumference – split in half.

Now, you might think, that’s not a big deal. Volcanic rocks probably split apart all the time – right?!?!

But this rock has long been associated with an evil fox spirit that haunts the “killing stone” or Sessho-seki in Japanese, making it deadly to humans.

An article in The Guardian goes on to explain more about the legend: “According to the mythology surrounding the Sessho-seki, or killing stone, the object contains the transformed corpse of Tamamo-no-Mae, a beautiful woman who had been part of a secret plot hatched by a feudal warlord to kill Emperor Toba, who reigned from 1107-1123.

Legend has it that her true identity was an evil nine-tailed fox whose spirit is embedded in the hunk of lava, located in an area of Tochigi prefecture, near Tokyo, famous for its sulfurous hot springs.

Its separation into two roughly equal parts, believed to have occurred within the past few days, has spooked online users who noted that, according to folklore, the stone continually spews poisonous gas – hence its name.

Visitors to the area, a popular sightseeing spot, recoiled in horror at the weekend after witnesses posted photos of the fractured stone, a length of rope that had been secured around its circumference lying on the ground.

The stone, which was registered as a local historical site in 1957, was mentioned in Matsuo Basho’s seminal work The Narrow Road to the Deep North and has inspired a Noh play, a novel, and an anime film.

Masaharu Sugawara, the head of a local volunteer guide group, told the Yomiuri Shimbun it was a “shame” the stone had split because it was a symbol of the area but agreed that nature had simply taken its course.

Local and national government officials will meet to discuss the stone’s fate, according to the Shimotsuke Shimbun. The newspaper quoted a Nasu tourism official as saying he would like to see the Sessho-seki restored to its original form – presumably with its demonic inhabitant sealed within.”

Presumably with the demon inside – yeah, that’s a good idea!

According to the NY Times, “the Nikko stone was designated a cultural asset in 1957 by Tochigi Prefecture and as a scenic spot by the national government in 2014. It is said to be one of several stones that the Zen monk created when he broke the larger boulder apart during his mythical encounter with the chastened fox spirit.

The government says the 17th-century poet Matsuo Basho was referring to the stone when he wrote of visiting one that emitted poisonous fumes and was surrounded by ground “covered in so many dead bees and butterflies that you can barely see the color of the sand.”

Masaharu Sugawara, 83, a volunteer tour guide in Nikko National Park, said the poet’s reference to the stone has long been a selling point for tourists. He added that animals that gravitate to hot springs near the stone in winter sometimes die from toxic gases.

Some feel, that rather than a harbinger of impending doom, the fracturing of the stone might be a good sign. (Although just to be totally transparent, it’s unlucky to discuss bad luck in Japan, so they might just be always looking on the bright side of life.) Some feel that the nine-tailed fox spirit (or demon) might be able to fight against all the bad luck we’ve been experiencing in the world. Kind of like an old Godzilla movie, the monster that protects its country from other monsters. (But let’s not think about what happened to the poor cities that were venues for their battles.)

Anyway, how bad could it be?