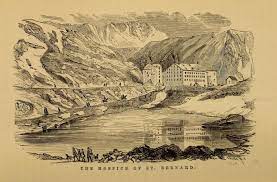 During this time of year, the name Charles Dickens often brings up visions of Tiny Tim, Ebenezer Scrooge, and a host of ghosts that are set on redeeming an old miser. But another book by Dickens, Little Dorrit, lays claim to another Christmassy – or at least snowy scene that is the perfect backdrop for a true ghost story – the Great St.  Bernard Hospice. At an elevation of 8,100 feet in the Pennine Alps, it was built in 1049 to protect and shelter travelers on a journey of danger from both the weather and brigands.

Dickens describes the odd paradoxical locations of a shelter for travelers only yards away from another structure used to house those who never made it off the mountain. This is how Dicken’s described it, “While all this noise and hurry were rife among the living travellers, there, too, silently assembled in a grated house half-a-dozen paces removed, with the same cloud enfolding them and the same snow flakes drifting in upon them, were the dead travellers found upon the mountain. The mother, storm-belated many winters ago, still standing in the corner with her baby at her breast; the man who had frozen with his arm raised to his mouth in fear or hunger, still pressing it with his dry lips after years and years. An awful company, mysteriously come together! A wild destiny for that mother to have foreseen! ‘Surrounded by so many and such companions upon whom I never looked, and never shall look, I and my child will dwell together inseparable, on the Great Saint Bernard, outlasting generations who will come to see us, and will never know our name, or one word of our story but the end.”

If you would prefer a slightly less flowery description of the St. Bernard Morgue, the Haunted Ohio website offers this letter to the Boston Journal. “The great curiosity of the Monastery of the Mount St. Bernard is the morgue. If the day is a little warm the brother who attends to visitors hesitates a bit before opening the door of the wooden house just outside the chief building. He first drives away the dogs, who come prowling about, snuffing the air suspiciously, and has them shut in their room opposite the huge refectory. Then he marshals the little company of international tourists in line before the mysterious door and opens the chamber of horrors. The keen mountain air rushes in, and presently you are conscious of a faint, sickly odor—not strong enough to be repulsive, but eminently suggestive of death. Then, as you stand there, peering with strained eyeballs into the darkness, you become vaguely conscious that a face is looking at you. I defy anyone who is possessed of the smallest grain of imagination to see that mysterious face growing slowly out of the obscurity without a sudden sinking of the heart and a chill which no effort of the will can suppress. It is the face of a woman — and yet of a ghost; a kind of corporeal presence divested of life, and yet so horribly like life, that you are almost afraid that the bony and skinny frame to which it belongs will arise and stretch out its dreadful arms, and drag you down into the depths which you so instinctively shun. The good brother does not say anything; he watches the effect of this curious spectacle upon you. Pretty soon you can discern that the face belongs to the body of a woman—and that this woman is clasping to her breast the form of a tiny babe. The mother is seated on the ground, and appears to be dazed by the light pouring down into her darksome habitation. But, oh! the horror of her face! Here is death without decay; here, in this wondrous air, on this pass more than eight thousand feet above the sea level, putrefaction is unknown; and bodies found in the snows in winter — or after the white shroud has melted away from the bosom of nature in the spring — are preserved entire so long as the monks care to keep them. The grimness of the spectacle is enhanced by the fact that nearly every body found is contorted, twisted, strained and knotted in fantastic shapes. Now and then one which bears all the appearance of tranquil sleep is brought in; but in most cases there are indications that man and woman, in their battle with Nature, fought hard and desperately, and refused to be overcome until every particle of force was exhausted. The brethren gather up the bodies with tender care and place them in the dead-house in the usually vain hope that some relatives may come to recognize them. Where is the father of the child which this strange spectral mother clasps in her arms? What was the history of the woman who had thus wandered in the wild winter from the Rhone valley toward the kinder and warmer Italian slopes? Perhaps her husband was with her — and perhaps his body now lies at the bottom of some precipice where even the “pious monks of St. Bernard” cannot find him—or perhaps he is here, in the dead-house; perhaps that prostrate body, seeming to grovel on the rocky floor, is his. The peasants rarely carry any paper which can completely identify them, and sometimes the unfortunates found dead in the pass here led such wandering lives — going to Switzerland for harvest work in the summer, and to Italy when the winter nips them—that their passports even give no clew to their birth-place or native villages.—From a Letter to the Boston Journal.“

So, you might wonder how I discovered such an odd and macabre place…one that’s still open to the public.

While researching Freaky Friday, I searched for ghosts in the snow and a link sent me to a forum of skiers called Snowheads.com  where one member asked about ghost stories or haunted ski resorts. Another member responded with, “There’s one story about a tall monk with a lantern who would lead people to the St. Bernard hospice in blizzards, and who’d disappear back into the snow looking for more lost souls when they get within sight of the monastery.”

It’s nice to know that the monks are still at it!