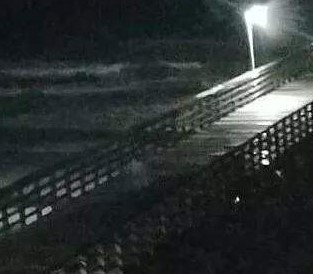 Last week I wrote about being prepared, this week I’m going to share another sort of “emergency warning” the folks in the Carolinas have when the weather gets bad.

Most of us start to really worry when Jim Cantore of the Weather Channel shows up in our neck of the woods.  He’s actually been close to Freeport, IL once – but generally, he goes to Chicago to stand next to the highway or Lake Michigan when a snow or ice storm is headed our way.  But in North Carolina, Jim Cantore isn’t the only harbinger of bad weather that gets people concerned. The Gray Man is a long-held North Carolina specter who appears on the beach or on a pier just before a major hurricane.  And, the good news is, just like Jim Cantore, he’s only there to warn you and those who see him seem to be spared from the worst of the weather.

OBX Today just did a story about the Gray Man in conjunction with Dorian.  In their story is a link to a video from last year by the paranormal group (hysterically-funny-paranormal-group) Ghost Guys Go. The group was reviewing video from the Livestream webcam on Avalon Pier just before Hurricane Florence hit and saw the ghost walking from one side of the pier to the other.

Employees at Avalon Pier have confirmed that it’s their video, but they won’t commit on whether they think it’s paranormal or not.

Legend says that the ghost was a young plantation owner who was returning to Pawley’s Island during a storm in order to ask his true love for her hand in marriage. During his trip on horseback to her home, his horse was spooked because of the storm and he was thrown into quicksand and died before he could propose to the girl.

The girl, distraught by the death of the young man, began walking along the beach alone, contemplating her lonely life.  One day, while walking, she saw a man in the distance who looked like her young man. She ran to him, but he disappeared before she could reach him.  That night, as she slept, she heard him whisper that she and her family needed to get off the island because a giant wind was coming.  She heeded his warning and she, her family, and their home were spared.

There are a number of other gray man encounters that have been cited in newspapers. They record how locals throughout the years have seen the silent ghost and then they and their homes were spared from devastation.

Another version of the legend says that he is Percival Pawley, who Pawley Island is named after. They say he is just watching over his island and the people who live there.  Still another version – and a little more dastardly -says that the ghost is actually the famous pirate, Blackbeard, and he wanders the shores trying to make amends for his life of pillaging and murder.

The ghost – or the legend – actually got national attention when Jim and Clara Moore, who lived on Pawley Island, saw the ghost just before Hurricane Hugo hit.  They credit the ghost with saving their lives and sparing their home.  They were interviewed by the show, “Unsolved Mysteries” and told their story.

Just two days before Hugo struck, the couple had been walking along the beach late in the afternoon and they saw a man walking toward them. When they got within about fifty feet of the man, Jim raised his hand to greet him. But, to their surprise, the man just disappeared.

Their entire neighborhood was destroyed by Hugo, except for their home, that was virtually untouched.  They could not believe their good fortune and later, when the local paper questioned the whereabouts of the Gray Man during this tragedy, they both realized that it was because of the man they’d seen on the beach.

Hopefully, Gray Man is jogging down the beaches of North and South Carolina right now, saving as many lives and houses as he can.  In the meantime, those of you along those shores, be safe!