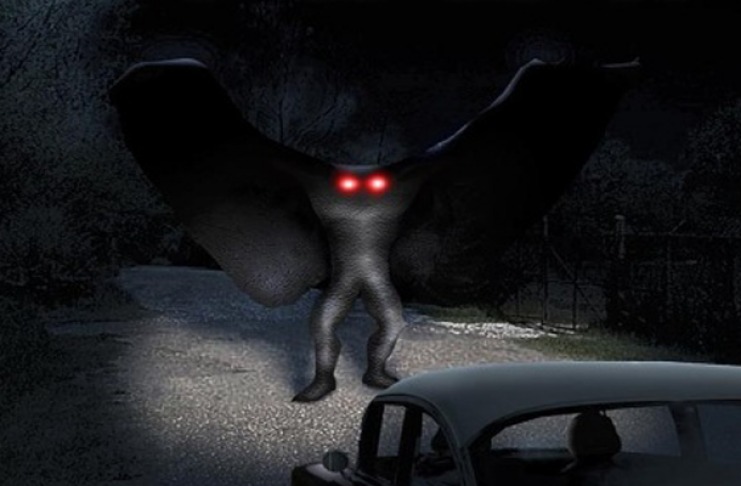 But, did you know that Gallipolis, Ohio is right across the river from Point Pleasant and also has had hundreds of sightings of the tall, human-like, brownish-silver creature with glowing red eyes?

As a matter of fact, according to Akron Ohio Moms, the legend of the Mothman could go back as far as the 1700s, when the Wyandot Indians spoke of a vampire-like creature that came out of the woods on foggy days. However, the Wyandot did not call them Mothmen, instead, they were known as “Flying Heads.”

William Connelly offered this entry found among the history of the Wyandot Indians from Ohio: “The Flying Heads plagued the Wyandots. They were more dangerous and troublesome during rainy, foggy, or misty weather. They could enter a cloud of fog, or mist, or rime, and in it approach a Wyandot village unseen. They were cruel and wicked hooh-kehs and cannibals. They caused sickness; they were vampires and lay in wait for people, whom they caught and devoured. They carried away children; they blighted the tobacco and other crops; they stole and devoured the game after the hunter had killed it.”

It seems that the Mothmen did not leave the area with the Wyandots. The website Weird US links the Mothman to Thunderbirds. In the early 1900s, there were reports of large birds with wingspans of 12 feet across and they would fly up and down the Ohio River Valley. Even during World War I, there were accounts of these giant birds. Although we might think this was all fiction, mothers in Ohio actually kept their children indoors during the times of these sightings.

Well, cryptozoologist Mark Hall believes that this Mothman might have developed a way to camouflage themselves from those pesky picture-taking mobs.  They actually disguise themselves as upright trees or logs lying on the ground. Part of his hypothesis comes from an experience an Ohio woman shared with him. “The witness said that “…while fishing in Rocky Fork Lake in Ohio we drifted into a pristine cove on the southwest side and noted with utter disbelief an old tall topless tree truck approx. 9-10 feet high, 112 inches around, move about 4 ft. sideways. (This was on shore about 20 ft. inland among like-looking trees and underbrush.) Again, it moved, only this time there was a partial twisting or rotation from the top 18-24 inches. It slowly maneuvered backward (keeping erect like a tree) into the woods, with NO NOISES from it or the underbrush, as graceful as a bird through a tree. It stopped in the middle of a sunlight clearing…” She then writes the “wings unfolded with a span greater than most small airplanes.” After a while, she reports it returned to its “tree appearance.” She saw the “semblance of two eyes” and thought it was watching them.

The sun went down and the sight was lost to view. Then: “One year later, same lake and a half-mile or so from that first cove this figure appeared near the shoreline again. (It seemed taller or leaner.) This time [I] got a look at its legs and feet —yellowish grainy like chicken legs…they were so thin and short for its height. Three long slender toes with a hooked toe or nail on the lower leg.”

For those of you not familiar with the Mothman story made popular by the movie, one of the ideas linked to the creature was that he had come to warn the people of Point Pleasant and Gallipolis about impending doom. On December 15, 1967, the Silver Bridge connecting Point Pleasant to Gallipolis, Ohio collapsed. Many blamed the ominous Mothman for the collapse, but many saw him as a harbinger of doom – warning the residents of the imminent danger. The Mothman was never seen in the Point Pleasant area after the collapse of the bridge, (really, who would stick around when you’re being blamed for a bridge collapsing?) but he has been spotted around the world in recent years.

The last eyewitness account I’m going to share actually comes from five pilots, professionals who are trained to be observant. “On December 4, 1966, five pilots at the Gallipolis airport saw what they thought, at first, was an airplane, going 70 mph. Then all five clearly said it appeared to be a giant bird, with a long neck.”

Since the sixties when it was seen often in Ohio and West Virginia, similar creatures have been seen all around the world.  In the past few years, there have been numerous sightings in the Chicagoland area.  So, you never know when you might run into one.

2 thoughts on “The Gallipolis Ohio Mothman”