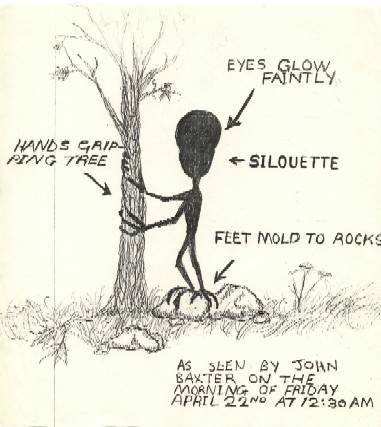 When you’re driving at night and you’re only seventeen, lots of weird things can happen. But age has nothing to do with what happened to William Bartlett in 1977 when he was driving down the road and suddenly his car’s headlights reveal an enormous, alien-like monster with long spindly fingers. The creature was slowly crawling along a rock wall on the side of the road not too far from his car.

Bartlett said the creature was “standing on a wall, its eyes glowing (in the headlights). It was not a dog or a cat. It had no tail. It had an egg-shaped head.” He continued to say that it reminded him of children with distended stomachs, but the head had no mouth, ears, or nose.

But, hey, he’s seventeen. He probably imagined it, right?

That same night, John Baxter and his girlfriend saw a similar creature on Miller Road. Baxter got within fifteen feet of the creature and described it just as Bartlett had. He even drew a sketch of what he saw (see above).

And then the following night, Abby Brabham saw it on Springdale Road. It was standing upright, next to a tree.

All of these encounters happened in Dover, Massachusetts, hence the creature’s name – the Dover Demon.

All That’s Interesting website quoted Loren Coleman, a noted cryptozoologist from Maine, and he feels that all of the witness sightings were credible.  He had spoken to the witnesses within a week of the reported sightings. “We have a credible case, over 25 hours, by individuals who saw something.”

In the article, Coleman says that the Dover Demon doesn’t match any inexplicable sighting reported before, such as those of chupacabras, Sasquatch, Rowell aliens, or the bat-eared goblins from Hopkinsville, Kentucky in 1955. But he also noted that the area in which the Dover Demon was sighted has a history of unexplained activity.

“In the same area, you had three major legends going on,” including a sighting of the devil on horseback in the 1600s, stories of buried treasure, and then the Dover Demon. “I think it certainly says something,” Coleman continued, “It’s almost as if there are certain areas that ‘collect’ sightings, almost in a magnetic way.”

Dover could be one such place.