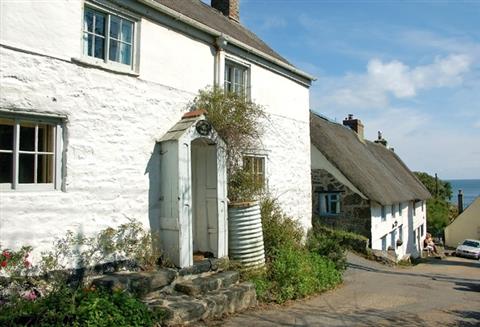 A few weeks ago, I received a lovely note from a new reader, who also happens to be an author too. In her note, she asked me if I really had a ghost in my house and then admitted that she’d only seen and heard one ghost in her life. Amy Heyman, from Sheybogan, Wisconsin has written two books – Polvenon and Tremorna. Both of her books are set in Cornwall, which is also where she saw her ghost!

So, I shared my ghost story (well, at least one of them) and asked her to share hers. Here it is:

In 1988, my mom and I rented The Corner House, a little cottage in Cadgwith, Cornwall, England. We stayed there for two weeks. The week prior, we spent sightseeing in London. It was in London where I thought I would maybe see a ghost…the Tower, Hampton Court…so by the time we took the train to Cornwall, I wasn’t even thinking about ghosts anymore.

It was into our second week at the cottage when there was a very windy, rainy night. I stayed in a bedroom right at the top of the stairs, with a view from my bed of the entire little hallway leading to the other bedrooms and the toilet. I couldn’t sleep.

The wind was rather ominous. I was thinking of going downstairs for a while when I looked down the hall and there, at the end of the hall, to the right of the toilet, stood a black figure. It looked like it had a hooded robe on.

I just stared, frozen in bed. I kept watching, thinking maybe it was my mom or maybe I was dreaming. All of a sudden, the figure lifted slowly from the floor and extended its arms out on either side and proceeded to swiftly float right at me!!!

I turned around in the bed and dove under the covers. I could hear a rustling sound right above my head. It happened so fast and before I knew it… dead silence. I think I waited at least 15 minutes before I felt like sticking my head out of the covers, and I finally did but there was nothing there.

I ran down the hall to wake my mom up and she said she had been sleeping soundly until I woke her up. I have no idea what that was, but I did e-mail someone a few years ago who lives in Cornwall and they asked around and said that a lady named Sara Legge (I think that’s how it was spelled) also saw something while staying there. I wish I knew more about the history of the cottage. Maybe that would tell me something.

That’s my story! First and the only ghost I’ve ever seen! And probably the last!

I have to admit, when she sent the story to me, I had to do a little checking. And I found this from a Facebook page called Haunted Posts: Just up the road from the inn is a holiday home named “The Corner House” it is said that here in 1988 it was reported that this dark monk-like figure was seen to rise and float along a corridor near the bathroom…”

I let Amy know that who she’d seen might have been a monk. You know those monks, always hanging around in the most unsuspecting places.

I hope you’ll check out Amy’s books, especially the second one which has a ghost in it. A ghost is Cornwall – sound familiar?

3 thoughts on “The Corner House”