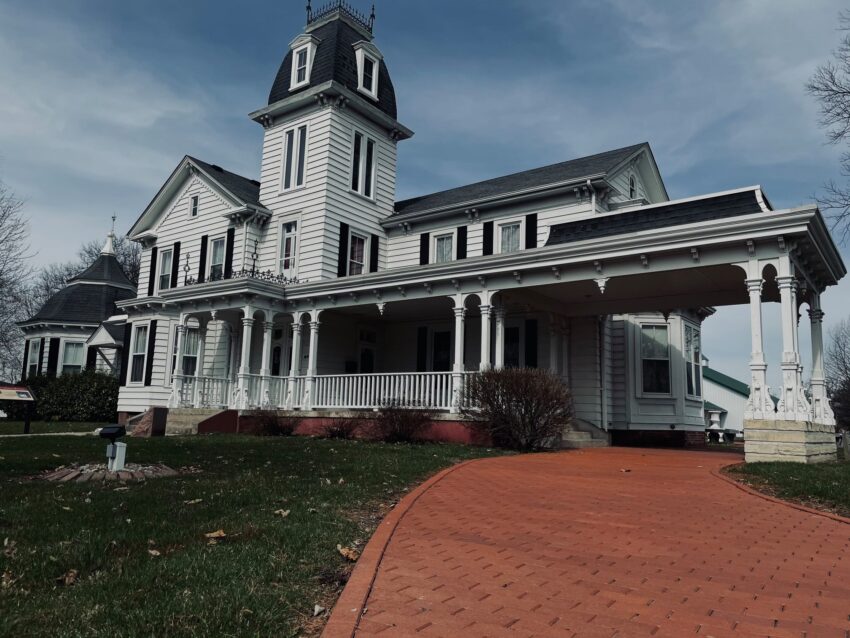 Earlier this week, one of my wonderful Facebook friends, Debra Dikkers-Golackson Rackow, posted some information on my page about ghost tours at the Cheney Mansion in Jerseyville, Illinois.  I’d never heard of the Cheney Mansion, so I thought it would be a good idea to do a little research.

The Cheney Mansion website was experiencing some technical issues when I visited, but I was able to find out this information about the history of the house: “Cheney Mansion is located in Jerseyville, IL. The Mansion and surrounding buildings are owned and maintained by the Jersey County Historical Society. Dating back to 1827, the Cheney Mansion has plenty of history.

The center part of the Mansion was the first structure built in Jerseyville and was called the Little Red House. It was a stop for the Stage Line which ran through this part of the country.

In the basement there is a false cistern that slaves were hidden in, which served as a “station” for the Underground Railroad.”

Actually, Ghost Hunt USA had a little more historical information than the Cheney Mansion website. Here’s a longer history of the site: “It’s hard to imagine that a tiny four-room house built in 1827 was the beginning of the 12,000 sq foot Cheney Mansion that stands today.

The four-room frame home built in 1827 and dubbed the “Red House” was converted to a tavern by 1830 and served as the first stagecoach station and tavern in the area.

In 1839, the little Red House was converted back into the residence by physician Dr. Edward D’Arcy. Dr. D’Arcy added a wing in the 1850’s to continue his practice and added a separate outside entrance so patients wouldn’t have to enter through the main house. The original portion of the home consisted of the area now comprised of the dining room, sitting room and the two bedrooms immediately above those rooms.

Dr. D’Arcy’s daughter, Catherine, married Prentiss D. Cheney in 1869. The couple had four children, three of whom died in infancy. Dr. D’Arcy gave the home to his daughter and her husband who were the first of three generations of Cheneys to live there.

The Red House was a stop on the Underground Railroad. Of two cisterns designated for the Red House, only one was used to collect rainwater.  Slaves were hidden in the false cistern accessed from a livery stable across the street via an underground tunnel.

Among the artwork in the house is a painting of flowers and vases from a local man who served with the Allied Headquarters at the end of WWII. Being one of the first troops to enter Adolf Hitler’s headquarters, he used a knife to cut this painting out of its frame as a souvenir.

What began as a little four-room Red House is now preserved as part of a grand residence reminiscent of a gracious English country home. The Cheney Mansion boasts six bedrooms, seven baths, multiple reception rooms and parlors, and separate servant’s quarters. The mansion retains much of its original appearance including original doors, woodworking, floors, Newell posts and three fireplaces.

Other interesting facets of the home include the “stairs to nowhere,” which are in the kitchen near the cellar and were ascended by servants to watch for arriving company, as well as a special stairwell to be used by servants when the family was entertaining.”

I’m so glad you asked.

Ghostly Voices has a page dedicated to the Cheney Mansion with several EVPs for you to listen to. In one EVP you can clearly hear footsteps in the attic above the investigators. Another one, in Dorothy’s room, has one of the investigators asking a question and you can hear the ghostly response of “yes.”

My favorite website about the mansion is the Paranormal Task Force folks. These investigators have been to the Mansion a number of times and have such great information about their experiences and some of the history. I’m going to share a few items from their website:

Second Floor Hauntings
Hallway – People have reported that when alone in the Mansion and when standing in the upstairs hallway or adjacent room, they will hear men and women conversing downstairs.
The Children’s Room – The attic door will close on its own.  Also, a stuffed rabbit is sometimes moved and jacks and a ball are sometimes played with by the unseen.
Prentis Dana Cheney’s (P.D.) Room –  It has been reported that the bed will levitate on its own then drop to the floor and at times will just move on its own.  People have also reported witnessing what looks like an invisible person moving around in the bed and/or hearing heavy breathing.
The Drunk Room (where P.D.’s wife Margaret would lock him in when he was intoxicated) – People have experienced the strong smell of vomit.  Someone has reported the experience of being grasped tightly on their arm by an unseen hand which held onto them for two to three minutes and several others have reported being lightly touched various places and having their hair tousled.
Miss Dorothy’s Room (P.D.’s nanny when he was small) – The spirit of a small black girl is reportedly living in the closet.  A ball is sometimes played with if sat in front of the closet door.  People also report experiencing a strong moving smell of talcum powder or soap at times that comes and goes without warning in this room.
Main “First” Floor Hauntings
Safe Room & Dr’s Office – There have been reports of the spirit of a man and/or a small boy living in the safe.  People’s hair is sometimes played with while they are in the safe and at times can be tugged on quite hard!  Sometimes when people sit on the stool in the safe, one of the little green safe drawers will pull out and hit them in the leg.  People often hear the sounds of a little girl singing an unknown but familiar tune while sitting near the doorway of this room and it sounds as if it is coming from the adjacent room or hallway.  This same singing has also been heard by people who were in the Sun Room/Control Room as well.  There have been reports of people also hearing a woman laughing in these same areas.  People will also at times witness the rocking chair in this room rock and/or move on its own.
There are also reports of people visually seeing a blue mist on the main stairway which is sometimes captured in pictures.
Basement
A black moving mass has been seen and reported by many.   It is also common for females to be
scratched on their back and/or neck.  Also, many females have reported their hair being tousled, lifted, touched and blown on as well by unseen forces.  Investigators have encountered moving areas of high electromagnetic filed (EMF) and of seeing an unexplainable mist in the slave tunnel.  Most of the paranormal activity in the basement occurs when there are no males present.

Note:  EVP’s have been collected from almost anywhere in the mansion.  Also, the mirrors in the home are famous for providing faces in pictures or video, some of which look very similar to photos of the Cheney family.  Cold spots and unexplainable breezes are felt often all over the mansion and hearing a loud breath in your ear which at times is caught on recordings is also a common experience.

There are plenty more experiences on their website, you really should go and check it out.  But, I want to leave you with their conclusion: “With the plethora of unexplainable experiences encountered by investigators during various visits and investigations coupled with remarkable audio containing EVP and an anomaly on video which may also be paranormal in nature (pending final results of analysis), there is no doubt that this location has activity occurring which is both unexplainable and paranormal in nature.”