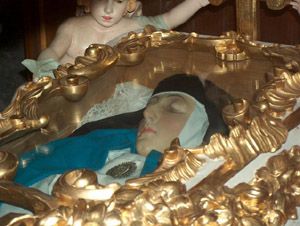 The other night, as I was cooking dinner, my husband turned on a new show on Netflix called “Warrior Nun.”  I watched it as I cooked, so I probably missed about a third of the show, but the plotline was intriguing, and we’ll probably go back and watch some more.

Nuns have always been a little mystical to me. I went to Catholic School when I was in first grade, and back then you were slightly terrified of the nuns. They were strict disciplinarians and they weren’t afraid to use the yardstick.

Then, later in my youth, the model of a nun was Sister Bertrille, the Flying Nun, played by Sally Fields. And, even though Mother Superior was quite stern, the other nuns were friendly and far less imposing. Following that, the nuns in “Sound of Music,” who were compassionate and a little sneaky. Then, finally, Sister Act, with another imposing Mother Superior surrounded by a bevy of good-natured and kind nuns.

But what about ghost nuns?

Would they be stern and frightening or compassionate and kind?

The Blue Nun – Maria Jesus de Agreda is a mystical nun who served the Native Americans who lived in Arizona, New Mexico, and western Texas. According to legend, she never left her convent in Soria, northeast of Madrid, but somehow, she was able to transport her spirit to the Americas to minister to the people of the desert.

In 1620, Sister Maria Jesus de Agreda, who was only 18 at the time, was praying in the chapel in Soria. As she prayed, her face grew pale and she began to sway. A witness claimed that a brilliant blue light enveloped her and that her body rose and hovered several feet above the floor. She reported that she was carried away in a trance into the presence of God himself. During these trances, He commanded her to take His message to the native peoples of New Spain, including the deserts of the Southwest.

Over the next decade, Sister Maria paid more than 500 spiritual visits, sometimes two or three a day, to the Native Americans. During these visits, she would instruct them on the fundamentals of their faith, speaking to them in their own language. She healed the sick.  She also urged them to contact Franciscan friars at the mission of the Rio Grande pueblos.

During that time in New Mexico, the Franciscans baptized more than 50,000 people in record time and rapidly installed twenty-five missions. The Native Americans who came to them told them about the Blue Lady.

Sister Maria died in 1665, at the age of 63. In 1690, a quarter of a century after Señora María’s death, a Tejas Indian chief in eastern Texas asked Damian Manzanet, a Franciscan missionary, for a piece of blue baize in which to bury his mother. He specified blue, the missionary said, “because in times past [the Tejas Indians] had been visited frequently by a very beautiful woman, who used to come down from the heights, dressed in blue garments, and they wished to be like that woman.”

Even in death, Sister Agreda seems to have amazing abilities. She is interred in a private crypt on the ground of the convent she came from. But even after 335 years, the nun’s body refuses to naturally decay. The flush of her cheeks and her life-like features still baffle the Catholic Church and modern science. During an opening of her casket in 1909, a cursory scientific examination was performed on the pristine body in peaceful repose, astounding the scientists and doctors who were allowed to perform the examination.

Even today, there have been sightings of the Blue Nun in the desert areas where she visited over 300 years ago.