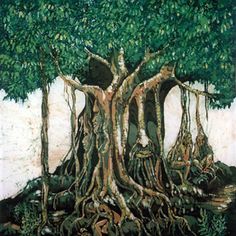 My older brother, Mike, served in Guam in the 1970s.  He was in the Navy, in Intelligence.  He once told me that there was one gate at the very end of the base, that was nearest to the jungle that no one wanted to guard, especially at night.  Even the locals stayed away from that area. He was stationed there one night, and he told me that the sounds and cries he heard from the other side of the gate made his blood run cold.

“It is said that the store at Naval Base Guam is located where a hospital and morgue once stood during and after World War II. Workers have claimed to hear footsteps and children’s voices, and one heard noises from a toilet stall, but no one ever left the restroom.

In another story, a Spanish officer and his Chamorro wife lived in Maina in the late 1600s. After their love had faded, the husband sent his wife to get him fresh mountain stream water during a storm, and she slipped into the river and drowned.

Today, it is said the if you drive over the Maina bridge during a new moon and look out into the night, you may see a ghostly figure wearing a long white flowing dress like a bridal gown. She has silver hair and sad red eyes. There are more “sightings” when a big storm is approaching.

Government House in Agana Heights is another such place. There are reports of the heavy double doors of a building connected to Government House opening noisily and the footsteps of someone walking along the hallway being heard. Supposedly, if you look at the door when it is open, it will slam shut.

Two soldiers from World War II apparently walk near the Leo Palace Hotel in Talofofo during the hours of midnight to 4 a.m. It is said that you can see them, in uniform, walking side by side, if you look in the rearview mirror, though, one soldier has no head. But if you turn around to glance back, they disappear.”

But none of those stories come close to the fear my brother felt when he was standing at the guard post at night, with the jungle just yards away.  Perhaps it was not ghosts, but something more unique to the island. Taotaomonas.

Here are some stories from the website Your Ghosts Stories that might shed more light on what Mike was feeling:

“I was stationed in Guam on 2 July 2007. I had heard a few things about Guam before I got there and I was excited about getting to live in such a wonderful mysterious place. I made friends with a few locals after I got there and everyone had a story or a true tale to tell about the Taotaomonas (ancient people of Guam). Whenever a person enters a forest, sacred place, or religious site they have to ask permission from the land or Taotaomonas that reside there. I was told if you don’t speak Chamarro that was ok as long as you asked permission in your language to enter the area.

My family and I decided to take a riverboat tour of the rivers in Guam. It was early afternoon, like 1 pm. We saw a lot of fish, frogs, Philippine Deer, and wild pigs that live at or near the river. The tour took like 2 hours and in the middle of the tour, we visited a Chamorro village that was set up like they were back 1,000 years ago. Before getting off the boat the tour guide told us that we needed to ask permission to enter the forest and the village so we would not get pinched or scratched. As soon as I got off the boat I felt strange and I did ask permission like 2 times before I set one foot in the forest. The village was like a 1/4 mile hike from the dock.

As I was walking through the forest I felt like someone was watching me, like really watching me as I entered the forest and until I got to the village. I felt like whatever was watching me was really mad! The forest was dark and the temperature was like 86 degrees. At the village, they told us about Chamorro history and daily life. We went a different route on the way back to the boat dock and the tour was over. All of us had a story to tell about how it felt entering the forest. My skeptical wife was even a believer of the Taotaomonas after that trip!”

This was when I was about 9 years old. My family had a gathering at my Nino’s house at night and my auntie was in the back cutting coconuts from the coconut tree. I was watching her from the front yard waiting to scare her and I heard someone talking. It was a deep voice. I looked back and saw a shadow walk by slowly underneath the streetlight.

Then I remembered my mom saying that at night there would be ancient Chamorro spirits walking around all over Guam at 6:00 pm called the Taotaomona. I didn’t believe her at first, but when I saw the shadow I had chills. So I went back to the gathering and saw something again. It was another spirit but a different figure. Maybe a little bigger than the one I saw under the streetlight. It stood there at the side of the house staring at me. I could see that no one else could see it but me. So I went inside the house and told my cousin. He didn’t believe me.

So when I got home I told my mom and she told me they don’t like it when people are loud during their time. Now I know that I have to sleep early because she said that the Taotaomona pinches loud people or makes them sick if they find them disturbing. Sometimes people die. I guess I was bothering them.

I also remember the time when I was 10. I was riding my bike down a big hill in front of my house. It was about 7:42 or 7:43 pm. I was riding it by myself. Suddenly, I saw a dark figure under the streetlight again. I think it was one of the ancient chiefs from over 500 years ago. I peddled a little faster so I could stop by the store up ahead. It kept on moving faster towards me. So I decided to go and ride to it to see if it was my cousin who was at my house.

But as I went closer to the figure, I saw that there was nobody around to make the shadow. I started breathing hard because I wasn’t this frightened in my life since when I was 9. So I peddled back up to my house and I didn’t stop no matter how tired I was. Since then, I never rode my bike after 6:00 pm ever again.”

A Face in the Window

One night, when I was about 12 years old, my family and I were at our grandma’s house in Dededo. My mom, brother, and grandma were all sitting at the table in the extended kitchen at the back of her home. I felt tired and complained to my mom that I wanted to go home. She said not yet, so I decided to go lay down in our car parked on the side of the house not far from the kitchen.

I opened the back door of the car and lay down. My head was behind the driver’s seat and my feet behind the passenger seat. I heard someone approach the car, so I opened my eyes and saw my brother standing at the passenger window looking in. “He’s just trying to scare me,” I thought. I closed my eyes again, but I could still feel him staring at me. I opened my eyes but he wasn’t at the passenger window. I quickly turned to see him looking in through the back window with his hands on the glass, just staring at me. It was so dark that I couldn’t see his face, but I knew it was him teasing me so I closed my eyes again. But at this point, I felt afraid and whispered, “OK, I’m going to count to three, then he should be gone.” When I opened my eyes he was gone. I jumped up and looked all around but didn’t see my brother. My heart was racing like I’d just run a marathon.

Now I was just furious with him. I rushed out of the car, ran to the kitchen, and yelled at my brother, “You know what, RJ? You’re not funny at all!”

He looked incredibly confused and said, “What is your problem?”

Of course, he’d try to play innocent. “Why were you trying to scare me at the car when I was trying to sleep? Ugh!”

He replied in a calm voice, “Sha, I wasn’t at the car. I’ve been here the whole time.”

I looked at my mom and grandma, still in shock and confused. It must have been him! But then my mom said, “Sha, RJ never got up from that chair. He’s been sitting there.” I felt the hair on my arms stand as goosebumps traveled my body. My grandma asked me if I saw the person’s face. I told her I hadn’t. His face was black, but he was wearing a white t-shirt just like my brother was wearing. Now we were worried that some random guy was wandering around the property. RJ checked around the house but no one was there anymore.

We went home a little later that night. I showered and went straight to bed. But as I was falling asleep I felt someone tickling my feet. Tired, I ignored it. Then I felt as if someone was caressing my hair. My hair was really long at the time, going down to my thighs. I felt the goosebumps again as I got out of bed and went to my dad to tell him what happened. He calmly said he believed I had a “friend.” He said it was a friendly spirit. A gentle taotaomo’na. Still, he lit a blessed palm leaf in my room to make sure I was safe. I was able to sleep peacefully that night.

However, even after that, the tickling and caressing of my hair continued. I began to sleep with blessed rosary beads hanging on my door and palm leaves on my window. I would wake up with dark bruises on my legs, but they never hurt. My dad told me that just means that they like me and to not be afraid of them. I wasn’t afraid, and after a while, it stopped. It’s been over 10 years and I still have the rosary beads hanging on my door.”