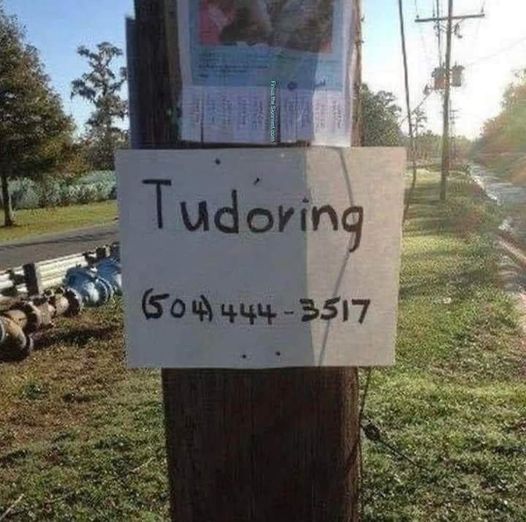 It all started with a Facebook post – someone offering tutoring but not quite getting it right.  So, I had to post a meme of a Tudor gentleman on horseback looking quite dashing. Then, a brilliant friend replied to me, letting me know that the Tudors were rather unlucky.  I didn’t know that – so I had to look it up. (Because that’s how my mind works.) And now I’m sharing it with you.

The wonderful website “theannebolyenfiles” has an entire page about superstitions in Tudor England. This is from the site “As it says in The Cambridge History of English and American Literature, “the belief in fetishes, totems, the evil eye, luck-bones, folk-remedies, love charms, and nefarious magic was rampant in England” at this time.”  (Can I just add that I really love to be able to use the word “nefarious” in a sentence.”

So – what kinds of nefarious magic or strange phenomena did they behold?

Raphael Holinshed was a historian who wrote a comprehensive history of England in 1577. Many believe his work influenced Shakespeare’s plays that dealt with historical events, like Macbeth and King Lear.

In his Chronicles, Raphael Holinshed writes of the year 1562: “This yeare in England were manic monstruous births. In March a mare brought Tuene foorth a foalc with one bodie and two heads, and as it were a long taile growing out betweene the two heads. Also, a sow t’arowed a pig with foure legs like to the armes of a manchild with armes and fingers, etc. In Aprill a sow farrowed a pig with two bodies, eight feet, and but one head: manie calves and lambs were monstruous, some with collars of skin growing about their necks, like to the double ruffes of shirts and neckerchers then vsed. The foure and twentith of Maie, a manchild was borne at Chichester in Sussex, the head armes, and legs whereof were like to an anatomie, the breast and bellie monstruous big, from the nauill as it were a long string hanging: about the necke a great collar of flesh and skin growing like the ruffe of a shirt or neckercher, comming vp aboue the eares pleited and folded.”

Rather than considering these events as birth defects or regular abnormalities of nature, the folks in Tudor times considered them signs and manifestations of God’s wrath and the need to repent.

The website “Nationaltrust.org” lists some of the superstitions and beliefs during this period. “In Tudor times there was a genuine belief in witches and the power of evil. The Tudors especially feared the night and the dark. From the time of Henry VIII and up to the Civil War and Commonwealth years, there was a period of religious turmoil. People felt they could no longer turn to the Church as a remedy for their worries, in the same way as they had done before. It was also a time when the North West region was affected by the Plague. Burn marks were likely one of the many things that people did to deal with their fears – they were a form of protection.”

From burn marks to sets of concentric circles scored into the wood – all were used to either trap or frighten away evil spirits.

Some of the actions and sayings we still use today come from Tudor superstitions. The website cultureseekers.blog list some examples:

Saying “God Bless You” following a sneeze – the Tudors believed that the devil could enter your body when you opened your mouth to sneeze – the blessing warded off the devil.

It was unlucky for a black cat to cross your path – a black cat was strongly associated with witchcraft.

Touch wood to guard against bad luck – it was believed that a tree possessed magical powers. (Knock on wood.)

Not to walk under ladders – is considered bad luck as ladders are associated with the gallows and executions.

Spilling Salt is seen as bad luck – the most common contemporary belief requires you to toss a pinch of the spilt salt over your left shoulder, into the face of the devil who lurks there.

They also did other things to protect themselves from evil spirits that we don’t do today – like leaving dead cats in the chimneys of houses. This action was supposed to warn off evil spirits who wanted to come down the chimney. I’m thinking it would also warn off friends, neighbors, and even family members. Ewwww!

And, if that wasn’t disgusting enough, they would also bury bottles filled with urine and pins at the entrances to the house, thinking that it would stop an evil spirit from getting into the house. (Really, what self-respecting evil spirit would want to walk through a pee-entrance?)

Other things that were hidden inside homes, especially in the walls and in attics, were items like shoes, leather pouches, and witch bottles. All are used to prevent any unwanted entities from entering the building and causing harm.

All of this superstition seems to contradict religious belief, but the Tudors were very religious. Unfortunately, the combination of religious fervor and superstitious fear led to the growing paranoia over witchcraft.

History.co.uk helps us understand how witchcraft became a catchphrase for evil. “Before witchcraft became a byword for evil, resulting in thousands of people being accused of using magic for ill and as a consequence being imprisoned or executed, the Tudors took an enthusiastic interest in ‘soothsaying’ or the art of prophesying. Elizabeth Barton (the Nun of Kent) was a self-proclaimed teller of divine revelations who enjoyed a brief moment of royal patronage when her skills at predicting future events became known to Henry via his right-hand man and religious advisor, Cardinal Wolsey. Barton was a 19-year-old domestic servant when her first prophecy about a child dying appeared to come true.

Her fame increased by the time she met Cardinal Wolsey and through him had meetings with King Henry himself whom she impressed with her revelations that suited his own beliefs and politics. However, Barton’s hallowed status as a gifted prophet soon turned against her when she prophesied that Henry would die within a few months if he married Anne Boleyn. Soon afterward the ‘Mad Maid of Kent’ as Barton was also known, was found guilty of false prophecies and for being involved in a conspiracy to kill the King and hanged at Tyburn on 20 April, 1534.

By the time Henry tired of Anne Boleyn in 1536 and started seeking a new wife to give him the male heir he desperately needed, it was convenient for him to believe that she was a witch who had used magic to seduce him. A growing belief in such malevolent supernatural forces in Tudor England helped reinforce accusations of sorcery against unfortunates who found themselves facing enemies who wanted to get rid of them.

Boleyn was castigated as a sorceress, mainly because of rumours that she was a sexual libertine with unnatural sexual urges. it is possible that King Henry convinced himself he had been ‘bewitched’ to justify getting rid of her without a protracted divorce. In the end, Anne was executed on the grounds of treason and not witchcraft.

Contrasting against these extreme views of sorcery was a more acceptable form of magic-making, as demonstrated by Henry VIII’s endorsement of some of its practices, as being ‘purely natural’, a continuation of pagan ritualism, and demonstrating the study of ‘natural’ phenomena in general with no evil or irreligious intent. For King Henry sorcery was acceptable as long as it tallied with his own beliefs and favoured his ambitions and prejudices.”

Of course, when you get rid of the witches – or wise women as they were once known – you had to rely on doctors who were really not at the top of their game in those days. Here are some common Tudor remedies brought to us by BBC Horrible Histories “Tudor doctors had some herbs that worked but many of their cures were just sad and silly superstitions. Here are a few of the wacky (but true) Tudor cures:

Got a headache? Then rub your forehead with a rope that was used to hang a criminal. Suffer from rheumatism? Then wear the skin of a donkey. In pain with gout? Boil a red-haired dog in oil, and add worms and the marrow from pig bones. Rub the mixture in. A painful liver? Drink a pint of ale every morning for a week – with nine head lice drowned in it.

Are you bald? Use a shampoo made from the juice of crushed beetles. When the head is clean then rub in grease made from the fat of a dead fox. Are you a martyr to asthma? Swallow young frogs or live spiders, and cover them in butter to help them slide down easier. Other crazy cures included powdered human skull, bone-marrow mixed with sweat, a stone that has killed a she-bear, and fresh cream mixed with the blood of a black cat’s tail.”

I think I would have preferred to stay sick!

So, not only were the Tudors unlucky, they were frightened. And fear often makes us do things we wouldn’t do in normal circumstances – you know, like sleeping with the lights on after you stay up late and finish that slightly frightening book about ghosts. But look on the bright side, at least you don’t have a dead cat up your chimney.

2 thoughts on “Superstitions in Tudor England”