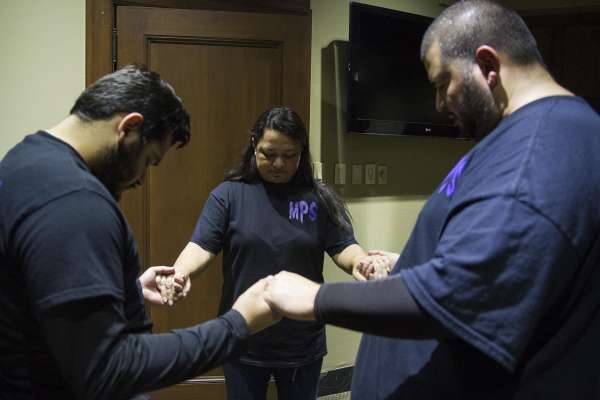 Last week I wrote about an experience I had in the old Union Pacific Railroad Station in Salt Lake City.  At the end of the article, I mentioned that if you were going to participate in paranormal investigations, you should protect yourself. Today, I’d like to talk a little about what that kind of protection could look like.

Let me start by saying that I believe there are all kinds of things out there that we really don’t understand. I know that there are many people who don’t believe in the existence of ghosts. Having seen a couple with my own eyes, I find it hard to share that belief.

For the most part, the spirits I’ve encountered have been connected to people who once lived. Whether they were just passing through reliving a pattern they lived in life, or they actually had an intelligence about them and knew that they were visiting the other side of the veil, they were basically harmless.

I have had a couple of encounters, the Salt Lake City experience for example, where those entities did not seem like they were connected to people who once lived. They might be considered in that category of entities that are not here for our good. People call them different things – evil spirits, demons, devils – whatever name you want to use, I personally believe that they are dangerous and would really like to harm us.

On the other hand, and we talked about this a couple of weeks ago, there are entities out there who play for the opposite team as those evil spirits. I wrote about them on my Facebook page and was amazed at some of your responses. I realize I didn’t do a Freaky Friday about them – and I need to – because angels are a very real and hopeful part of our lives. But in all of the encounters I’ve read about angels, they are generally an “appear when you need them” kind of thing, not a reoccurring entity.

Finally, there is this whole other category (probably several categories) of things that are out there, that we just don’t understand. There are things like elementals, there are aliens, and there are cryptids (creatures like the Beast of Bray Road or Big Foot.)  How do you guard yourself against things like that?

On the website Hollow Hill, the author, Fiona Broome has an article about spiritual protection for ghost hunters. Some of the things she suggests are garlic, salt, Holy Water, religious symbols and talismans. Here are a couple of excerpts from her article:

“Fresh garlic cloves are available at most grocery stores.  Garlic not only repels werewolves and vampires, at least according to folklore, it’s also supposed to keep demons at a distance.

You can carry it in a pocket or your backpack.  Some people have a clove in a pendant and wear it as a necklace.”

I hadn’t heard about garlic before except, you know, in vampire movies. If nothing else, the fragrance might keep entities away.

“People believe that salt repels ghosts and evil spirits.  In fact, an old remedy from folklore is to lay down a line of salt… evil entities cannot cross it.

I’m not sure if that’s true, but it seemed to work the one time I tried it.”

I have heard about salt; it seems to be used quite a bit in dealing with the paranormal.

“Some people use Holy Water to bless houses that have very light (but annoying) paranormal activity.

From what I’ve learned about demonic activity, I would use Holy Water only in situations where there is absolutely, positively no likelihood of malicious and demonic energy.

One thing I learned from the late Father Andrew Calder is:  If you’re dealing with something dark and demonic, Holy Water can make things far worse… quickly.”

This was eye-opening to me. I hadn’t realized that Holy Water could make things worse. Kind of like waving a red flag in front of a bull. So, that’s something to consider.

Weirdly, that’s true, even when the person using them doesn’t believe in the associated spiritual tradition.  I have no idea why.”

I thought this was interesting too. I would guess that crystals would fall into this category, as well as many of the religious tokens that my readers stated they used.

The website, The Other Side actually lists a couple of prayers they use when they go on an investigation.  These are from their website:

“May we be strong in the Lord and in the strength of his Might!

St. Michel, the Archangel, defend us and be our protection against all evil and negativity on all levels.

May the Divine light of the Archangels surround us with their love.

We ask that all negative thought forms, lost souls, residues, elementals, and fragments be permanently healed and taken into the light, that all may be freed according to the highest will of God.

May we be purified and blessed upon every level of our being, in the work we do, and be given more Divine power and protection.

Thy Will Be Done! Thank you and Amen.

Surround our Circle in the White Light of Holy Protection.

We ask that no harm befalls or follows the Protected Circle,

And that Our Quest benefit all who are among us.

We thank Thee for Your Protection of Holy White Light.

“God bless every corner of this house, may Peace dwell within,

Protect all that come and go, whether friend or kin.

Bless every door and windowpane and every ceiling and wall

Bless every closet, nook and cranny, crawl space, or basement bless it all!

Hold us in your loving care every second of every day,

in every way from early morning into sheltered night!

Let all be in your complete perfection as you intended

Release all negativity into your confirmed light that is extended!

We thank you and expect your miraculous intervention

Clearing all with purification, Love, Peace, and Joy as divinely intended!

Spirits of light, we appreciate and thank you for your time and wisdom.

In the name of Jesus Christ, we command all spirits, energy, and entities in this place to return from whence they came and be bound to the confines of this location.

You are not allowed to attach to us or our equipment or follow us.

We ask that the Holy Spirit watch over this place and the people in it,

cleansing this space with Holy Light, keeping evil at bay.

We command all inhuman spirits to go where Jesus Christ

tells you to go, for it is He who commands you.

Many of you commented that you use prayer before you go on an investigation and when you finish one. I think prayer is a wonderful idea, it connects you to the positive spiritual realm.

A couple of sites talked about spirits following you home, so you need to be sure that you make it clear that they are not allowed to come. But, be aware, they can hitchhike back with you if they are connected to an object you remove from the site.

A friend of mine went down to Alton, Illinois to a paranormal conference. Alton is considered the most haunted city in Illinois and was the home of a Confederate prison during the Civil War.  This friend, who is an experienced investigator, brought her daughter with her and, while she was finishing up some things, her daughter did something our family always does when we visit a place. She picked up a rock to remember the visit.

Several days later, my friend heard whistling in her house. It was driving her crazy. It wasn’t the television, the neighbor, her phone – she couldn’t discover where the whistling was coming from. Then, she started to see glimpses of a soldier in her home. That gave her an idea of who the whistler was.  She called her daughter and asked her if she’d brought anything home from Alton.  Her daughter told her about the rock.  So, she went to the boxes that still had all of her information from the conference and found the rock.

So, she picked up the rock and explained to the entity attached that she realized that her home was probably a more peaceful place than where he’d been, but he could not stay in her house. Her solution was to put the rock in her back yard. Now, her neighbors often ask her if she hears random whistling. She just smiles.

Because of her knowledge, this experience was manageable. And, because the entity was peaceful and just wanted to be out of the prison. But other entities might not be as friendly or accommodating.

Finally, trust your instincts and don’t put yourself in risky situations. I’m reminded of the bison at Yellowstone National Park. Every year people are killed because they got too close to one of these huge animals.  They think because they are in a park, the animals are gentle or trained or can’t hurt someone. Wrong!  They are massive, dangerous animals that need to be respected. When you are dealing with the paranormal, you don’t know what you’re going to find. I’m always amazed at Josh Gates when they are on an investigation and they hear something in the woods and run after it. I think, what are you going to do if it turns around and runs back in your direction?

Don’t go down into the basement when you hear a noise unless you have solid backup.  We’ve all seen the movies – don’t be that person.

Have a healthy, and perhaps cautious, respect for the unknown. Some of the things we encounter are not our friends. Remember that some of the voices in your head could be put there by something that is not you. Don’t be afraid to challenge that voice. Don’t be afraid to tell it to go away.

Finally, understand how you react to paranormal phenomenon. I get lightheaded when there is something in the room with me. Other people have other strange reactions. I have a friend who gets a tickle in her throat. The problem we would have is that any time I would come into her shop “someone” would come in with me.  So, most of our conversations have been with her coughing her way through them. I always try to bring cough drops with me when I visit.

Final words – be safe. Make new friends. But don’t bring them home with you.