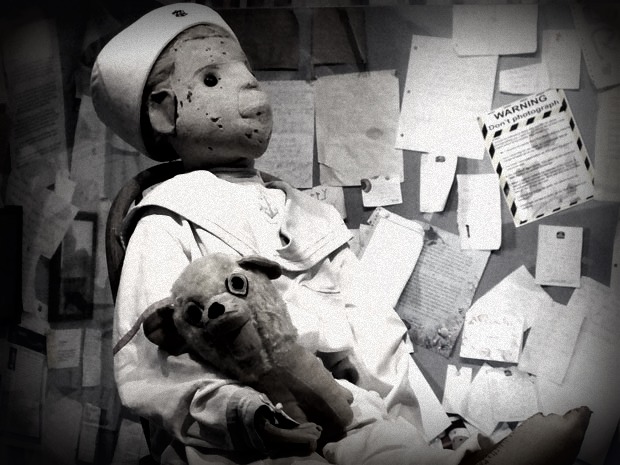 Dolls are supposed to be a wonderful child’s toy. Something to hold, cuddle, and even learn some basic nurturing skills.  But sometimes dolls are more creepy than cute. There is actually a certified fear of dolls called pediophobia and many horror movies don’t help with that condition, from Chucky to Annabelle, dolls can send a shiver up our spines.

But this is all fiction, right?  I mean, dolls are just bits and pieces of porcelain or plastic, fabric or felt, paint or thread. Dolls can’t really come alive, or can they?

Dolls have historically been used in magic and religious rituals throughout the world. The earliest documented dolls go back to the ancient civilizations of Egypt, Greece, and Rome. Wooden paddle dolls have been found in Egyptian tombs dating back to as early as the 21stcentury BC.

I remember watching a Dead Files episode where they were called to a house experiencing paranormal activity and the owner was a collector of dolls.  She must have had hundreds of dolls in her home, all over the place.  During the reveal, Amy told the woman that she needed to get rid of her dolls. She explained that dolls used to be resting places for spirits, which is why they were hollow.  I tried to find corroborating information about that theory but couldn’t pin down anything specific.  I did find, however, that dolls seem to have a history for being paranormal magnets.

The Daily Mail UK printed a story about a man who claims his collection of dolls is haunted by the spirit of dead people, including a seven-year-old girl who drowned in a lake and a governess burned in a fire.

The website Roadtrippers lists the Warren Occult Museum in Monroe, Connecticut as the home of Annabelle the evil doll. This is a comment from the site, “Only the brave can pay a visit here. This place was the one featured in the horror movie “The Conjuring”. This houses “Annabelle” and a whole lot of stuff which are believed to be cursed. Walking inside the museum definitely gave us the shivers. We didn’t stay long, though. We got scared and just decided to leave right away. On the other hand, if you’re into the paranormal, give this place a visit and I believe that everything will seem interesting to you. But if you’re not, like my friends and I, better not go here because you’ll only scare yourself.”

So, are you ready to pack up all of your old dolls yet? Maybe you still need to read about Robert the Doll.

Robert the doll as given to Gene Otto either by his grandfather, after a trip to Germany, or by a maid, a young girl of Bahamian Descent, who imbibed the doll with voodoo magic and gifted it to the young boy as retaliation for wrongdoing.

Whichever story is true, the website Robert the Doll tells a frightening tale about a doll that seems to have abilities that went far beyond what a mere toy would do.

“Robert is one-of-a-kind, handmade by the Steiff Company of Germany around the turn of the century. Standing 40 inches tall and stuffed with wood wool known as excelsior, he is dressed in a sailor suit and once bore painted features not unlike those of a jester. His unusual size indicates he may have been fashioned in the image of his constant companion – a boy named Robert Eugene Otto. The doll took Robert as his name, while the boy simply went by ‘Gene.’ Together they would go on to make history.”

“Gene and Robert were ‘best friends’ growing up. Legend speculates voodoo played a part in Robert’s formative years, while interviews with those close to the Otto family indicate a great deal of emotional energy was placed upon the doll during Eugene’s lifetime. It is said that young Gene would shift blame when he misbehaved as a child, pointing to the doll and saying, “I didn’t do it. Robert did it”.

“Gene went on to become a prominent artist. He designed the gallery at the Fort East Martello Museum and had plans to make his own home a museum, complete with a wax imprint of ‘the artist’s hands’ as a focal point. Though this dream was never realized, his home became known as the Artist House and stories of the doll’s strange behavior became commonplace with those who encountered him after Gene’s death in 1974. Tenants heard footsteps in the attic room above them. A plumber heard giggling and turned to find the doll had moved across the room on his own. Solares Hill reporter Malcolm Ross visited Robert and said:

“It was like a metal bar running down my back. At first when we walked through the door, the look on his face was like a little boy being punished. It was as if he was asking himself, ‘Who are these people in my room and what are they going to do to me?’

Ross’ friends told him Robert’s back-story and pointed out the children’s furniture. It was at this point Malcolm noticed a change in the doll’s expression as if he was following the conversation. One of the men made a comment about what an old fool Gene Otto must have been. Robert’s expression turned to one of disdain.

“There was some kind of intelligence there. The doll was listening to us.”

Ghosts and Gravestones adds to the story: “The home where Eugene lived, now called the Artist’s House, is located at 534 Eaton Street and was built between 1890 and 1898. It was here that Eugene was given Robert The Doll and where a friendship that lasted throughout his lifetime… and beyond, was forged. While he seemed like an ordinary cloth doll, it wasn’t long before Robert was involved in strange and somewhat terrifying events. The first hint that something out of the ordinary was happening was one night when Gene, who was only ten years old, awoke to find Robert the Doll sitting at the end of his bed staring at him. Moments later his mother was awakened by his screams for help and the sounds of furniture being overturned in her son’s bedroom. Gene cried for help, begging his mother to rescue him. When she finally was able to wrench the locked door open, she saw poor Gene curled up in fear on his bed, his room in shambles and Robert The Doll sitting at the foot of the bed.”

“Nobody knows for sure why or how this child’s plaything could actually wreak havoc on a child’s bedroom or do anything at all; after all, it was just a toy, right? But the weird and inexplicable didn’t stop at that one occurrence. Gene’s parents would often hear their son upstairs talking to the doll and getting a response back in a totally different voice. They reported seeing the doll speak and witnessing his expression change. Giggling and sightings of Robert running up the steps or staring out the upstairs window were also reported. Robert continued to live with Gene throughout his lifetime and after Gene’s parents died, he moved back into their home with his wife, Anne. Gene decided that the doll needed a room of his own and placed him in the upstairs room that had a window overlooking the street.

Anne felt uneasy with Robert in the house and although she couldn’t put her finger on it, she wanted Gene to lock the doll up in the attic where he could do no harm. Gene conceded and as one could imagine, Robert the Doll was not happy with his new digs. Soon, visitors to the home heard footsteps in the attic, the sounds of someone pacing back and forth and devilish giggling. Neighborhood children reported seeing Robert watching them from the window in the upstairs bedroom and told accounts of the doll actually mocking them as they walked to school. When Gene heard this, he immediately went to investigate, knowing that he had locked Robert in the attic and there was no way he could be sitting by the window of the upstairs bedroom. But to his complete shock, when he opened the door to the bedroom, there was Robert, sitting in the rocking chair by the window. Gene locked Robert back up in the attic several times; each time discovering him again sitting by the window in the same upstairs bedroom.”

When Gene and his wife died in 1974, a new tenant moved into the home. Myrtle Reuter bought not only the home, but also, its contents. She ended up donating Robert to the Fort East Martello Museum, citing only one reason—the doll was haunted.

Almost immediately, the museum staff noticed a shift of energies at the Fort East Martello Museum. Though Robert was not initially on display, he started receiving visitors as word spread about his new residence. Once he was put on exhibit, cameras and electronic devices malfunctioned in his presence, and soon letters began arriving addressed to the doll offering apologies for disrespectful behavior or asking forgiveness.

Robert The Doll sits inside a glass case; but it doesn’t seem to stop him from inflicting fear and discomfort to museum staff and visitors. Staff members report that Robert’s facial expression changes, they have heard demonic giggling, and have even seen Robert put his hand up to the glass.