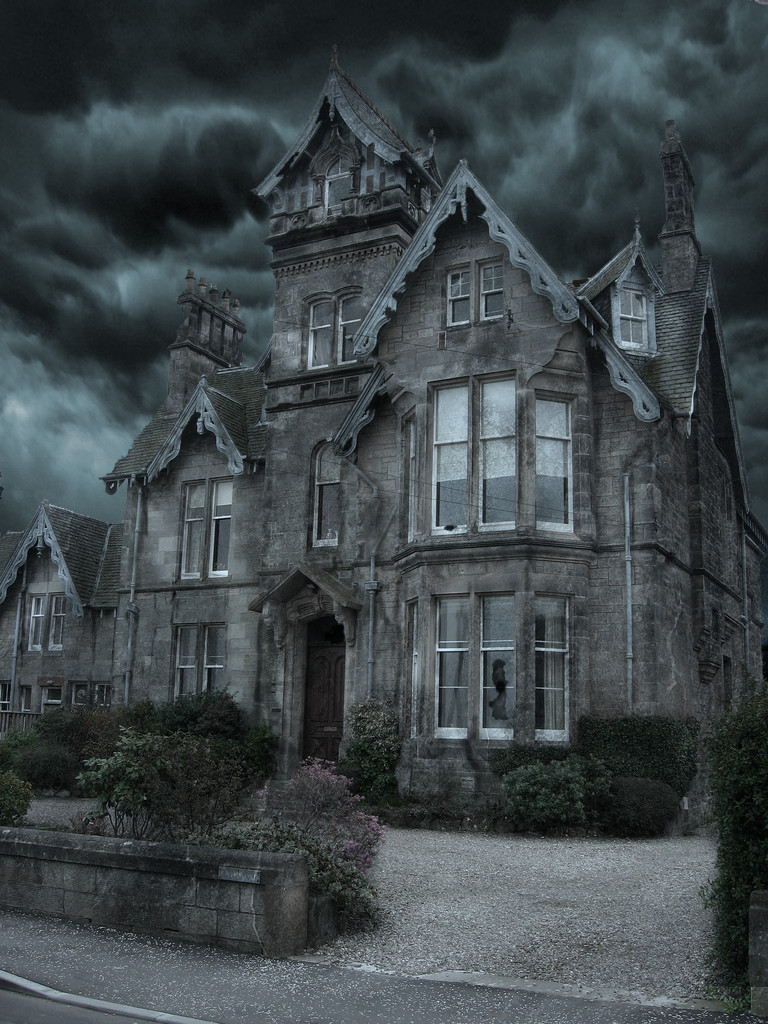 During the first few days of the New Year, I like to sit down and put together my list of goals for the upcoming twelve months. Part of that list are the things we need to get accomplished around the house. You know, things like painting the bedroom, cleaning out the attic, organizing the basement, or painting the front porch —all of those lovely to-dos that you want to be sure and schedule into your life.

Often remodeling an area of the house is on that list. Remodeling on its own can be tricky, but what happens when you combine remodeling with ghosts?

Well, it can sure be interesting, that’s for sure.

My favorite remodeling with ghosts story is from my dear friend, Kathi Kresol, who is the owner of Haunted Rockford Paranormal Events and an author and historian. Actually, remodeling is what piqued her interest in the paranormal.

Kathi and her then-husband had purchased an old home in one of the older neighborhoods in Rockford. The house needed a lot of work, but Kathi was “challenged” by the fact that she not only had four small children to take care of, she was also running a daycare in her home to earn extra money.  She also discovered that her then-husband had no interest in remodeling, so he would buy her cool tools and leave the rest to her.

Because she was running a daycare with many small children, she would take a permanent marker and write the child’s name on the outside of their bottle – just to avoid confusion. Her daughter, Aryn, was one of the little ones with a bottle.

One night, when she was working on a project after she’d put the children to bed, she heard Aryn cry.  She hurried upstairs to find that Aryn had lost her bottle.  She searched the entire room, but couldn’t find it, so she hurried downstairs and got Aryn another one, which settled the baby down immediately.

More than a year later, she had finally made her way up to the second floor with her remodeling and was working on the room that had been Aryn’s room. (Aryn was now safely sharing a room with another sibling.)  Picking up a sledgehammer, Kathi broke through the lathe and plaster in the wall.  She hit is again, exposing the ancient insultation.  She was about to smash it one more time when something caught her eye. She pulled away more insulation with her hands to expose the two by fours behind. And there, sitting on a crossbeam, was a baby bottle with the name “Ayrn” displayed on it. Somehow it had been sealed up inside the wall.

Kathi had always felt things in the house, but this was the final straw. She started doing research on the house and discovered that it had been the scene of a murder-suicide. She soon moved out of the house, into a “quieter” home, but her interest in the paranormal and her desire to help others who might be in similar situations was born that day.

Mosby Building Arts, who do historic renovations have had quite a few experiences with haunted dwellings. Here are two of the stories from their website:
“The City of St. Louis has had folks milling about and building up since 1764, so that’s a lot of history of souls in the soil and the mist. So, St. Louis has its fair share of famously haunted houses, like the Lemp Mansion.
But there’s plenty of generational activity in the thousands of unassuming St. Louis homes built between the Civil War and World War 1. Like this one charming brick bungalow in South St. Louis, on one of those streets named after states. We built a new detached garage for the family currently living in this South Side century home and working in the backyard and alley was relatively uneventful. But if you got close to the house…?
Like this one day, at the start of the project, when two members of the Mosby Planning and Design department were in the backyard measuring and taking photos. Let’s have Betty – who was there – tell it:
“I was measuring the back side of the house, and even though it was broad daylight in summer, the house just gave me the chills. At one point, I was measuring by the stairs leading to the basement door, and out of the corner of my eye I saw someone suddenly standing next to me. It startled me. And as I jumped back, couldn’t help but notice there was no one there!
“Maybe it was Mike (her co-worker) walking by? No, he was nowhere in the backyard. He was in the alley measuring the front of the garage. But there WAS someone there – I saw it, right? It spooked me. Needless to say, Mike had to measure the basement for me, because I wasn’t stepping foot down there!”
Once the garage was under construction, the Mosby crew was casually chatting with the homeowner, who casually mentioned that their house was haunted. She said they often heard “kids” playing upstairs and often had to tell them to quiet down because they’d make such a ruckus!
Upon learning of this from a Mosby carpenter, Betty replied, “Well, those kids play out in the backyard, as well!””
“The St. Louis County township of Webster Groves was founded right before the Civil War began, so its stock of historical homes is rather impressive. And, naturally, some of them have to be haunted, or so they say.
We were doing some extensive interior remodeling on a house reported to sit atop a former slave plantation. During the early days of this project, every Mosby carpenter experienced lights being turned off in the rooms where they worked. It happened so frequently that they got used to it, and simply turned the lights back on and continued working.
When this regular occurrence was finally mentioned to the homeowners, they indicated they know about this. They intimated that other things happen in the house as well, but stopped short of using the words “haunted” or “ghost.”
Shortly after this conversation, Mosby carpenters Tad and Van were working in the basement and were talking with each other about some of the poor-quality construction. After candidly mentioning that the carpentry was remedial, all the lights went out. Turns out they went out only in the basement and were back on by the time they returned. While being used to the lights regularly turning off, the timing on this one made them feel as if someone was listening, and not amused by what they said.
Shortly after this incident, Tad was in the attic, doing ceiling work on a ladder. The ladder was very secure and stable – he’d been up and down it 7 or 8 times. With no one else in the space, and with no change in Tad’s movements or set up, the ladder simply fell out from under him. Tad crashed to the ground and suffered a major injury that sidelined him from field work for a couple of months.
In the hospital after surgery, Tad was in a clearer state of mind to share details of the accident. He said, “The ladder slid out from under me in a sideways manner, like it had been kicked or hit from the side. Usually, if ladders aren’t secured correctly, they slide out from under you, going straight back. But this ladder went left, and I fell right. It was bizarre, and there’s no logical explanation for it.”
While Tad was out recuperating, another member of his production team was working alone in the same attic (not on a ladder – no way!) when he heard the sound a slowly creaking door. He looked around to trace the sound and saw one of the small doors on a half wall slowly but deliberately swinging open. It looked as if something was deliberately opening it, and he waited for something – anything – to dart out. But there was nothing but an open door, and one spooked carpenter.
Talk about a job site making you feel like a (black) cat on a hot tin roof… The entire Mosby crew was greatly relieved when this project was completed right before Halloween. Even the bravest can handle only so much!”

The website for This Old House also has its share of haunted house renovation stories. Here are a couple from their site:
“In 1970 when Governor Bob Scott moved a hundred-year-old behemoth of a bed out of his room and into a spare room on the third floor of the North Carolina Executive Mansion, he didn’t expect to so upset one of his predecessors. But Governor Daniel Fowle wasn’t having it. The widower politician had been in office when state penitentiary workers completed the brick-and-sandstone Queen Anne in Raleigh in 1891. But he died of a heart attack in the massive bed a few short months after moving in. The bed’s departure from Fowle’s former bedroom precipitated the deceased governor’s protestations in the form of a nightly spectral rapping that ensued promptly at 10 PM. Though the eventual return of the bed to what Fowle’s spirit apparently believes to be its rightly place in the house put an end to the racket, the Executive Mansion’s current resident manager, Jean Carroll, says affectionately, “We blame everything that goes on here on Governor Fowle.””
“Beer couldn’t save the Lemps from depression. St. Louis’ German-American brewing dynasty controlled the largest suds operation in town in the mid-19th century. But the death of favorite son Frederick triggered a chain of family suicides that felled William, William Jr., Elsa, and Charles Lemp. They killed themselves; Prohibition killed their business. The Lemps’ 1860s Italianate house had been a local marvel: newly patented radiant heat, an open-air elevator, 33 rooms. After the death (by natural causes) of the last Lemp son, the place became a boarding house. In 1977, renovations transformed it into a restaurant and inn—but not without difficulty. Ghostly barking and piano music, slamming doors, burning sensations, faces in the windows—the place was so spooky that several construction workers fled the jobsite.”

The HGTV website doesn’t have a collection of stories, but what I found really interesting was an article entitled, “5 Tips for Living in a Haunted House.” It was in their Real Estate section, right next to “Top 15 Home Updates That Pay Off” and “10 Ways to Prep Your Home for Sale.”
I would guess that the number one way is to not advertise that you have a ghost living with you.

I once interviewed a man who lived in one of the small towns outside of Freeport. He had a stone house – and a ghost. Stone houses and ghosts are not uncommon combinations.
He told me about trying to renovate his house with a ghost helper. He mentioned any time he’d put his pencil down, it would disappear. And it wouldn’t just roll away, he had those fancy flat pencils that contractors use.
The scariest thing that happened was when he was down in the basement, feeding copper pipe up through a hole in the ceiling for the first-floor bathroom. Suddenly the pipe was pulled out of his hands and it spun around for several minutes before dropping to the ground. He called upstairs, sure it was his wife or son playing a joke. Imagine his surprise when both his wife and son answered him, from right behind him in the basement.
He might have needed that bathroom sooner than he thought!

Finally, here’s a link to a GREAT Youtube video by a contractor who thinks there’s a squatter in the house he’s working on. He searches the house and… Well, I’ll just save the surprise for you!
Happy Friday!!!

2 thoughts on “Remodeling with Ghosts”