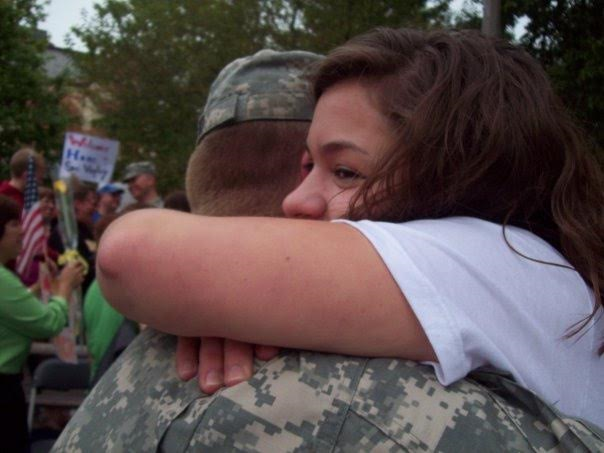 In July of 2009, I had the privilege of standing with the families of the men from the Delta Company of the Woodstock Illinois Army National Guard as we welcomed them back from their deployment in Afghanistan.

I will never forget the emotions of that day – sorrow (we lost five young men during the deployment), love, longing, and pride. There were moms and dads, brothers and sisters, wives and children, all of whom made the great sacrifice to allow their loved ones to serve our country.

As we anxiously waited, we had several members of the group announce how close the bus carrying the troops were to the square in the center of Woodstock, Illinois.  People stood on tiptoe, trying to catch a glimpse of the caravan. Then, finally, we could hear the motors of the Rolling Thunder motorcyclists as they escorted the buses into town.

Shouts of joy echoed throughout the park.

The loudspeakers blared, “The Boys Are Back in Town” and finally, the buses pulled up and our brave soldiers were home.

After the initial round of hugs, my son, David, who was part of the deployment, gathered his gear and told us he just wanted to go home. So, we all carried something for him and we walked away from the noise and the crowds toward the parking lot.

Surprised and touched, David put down his backpack, squatted down, and shook the little boy’s hand. The boy smiled at him. “Thank you for your service,” he said, awe in his voice.

This memory is the reason why, instead of ghost story or one of Rosie’s recipes for pie, barbeque, salads, or sweets, I decided we really needed the recipe for a great country.

One part courage mixed with one part conviction
Mix well so they are evenly distributed.
Add sacrifice, service, and selflessness
Simmer lightly
Fold in respect, tolerance and integrity
Being careful to gently layer the ingredients together
Season with tears, laughter, pride and determination.
Bake at a medium heat for over two hundred years
Finally, cover with prayer and serve.

2 thoughts on “Recipe for a Country”