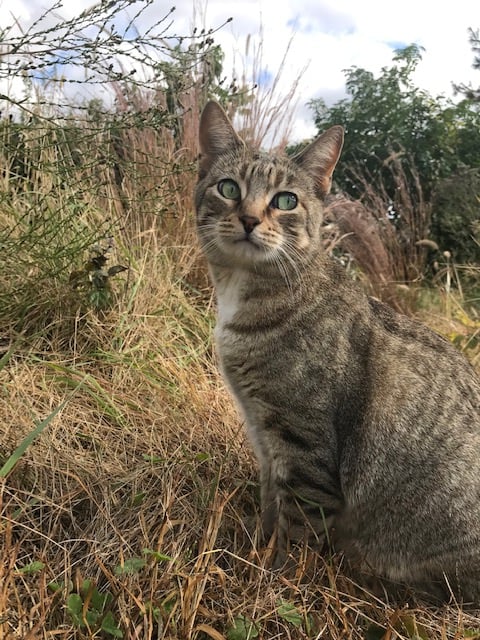 Our pets have the most uncanny ability to see, and deal with, the paranormal. I remember, years ago, we brought our Siamese-mix cat, McDuff, to the vet because he was acting WEIRD! He would walk into our living room and stare into one corner of the room. He would arch his back and hiss, then walk stiff-legged across the room never taking his eyes off that corner. His brother had been hit by a car and killed earlier in the week, so we wondered if he was suffering from that.  But we just wanted to be sure that he wasn’t sick.

The vet ran all kinds of tests, but McDuff was totally fine.  Finally, the vet said to us, “Well, maybe he saw a ghost.”

I waited for the punch line – but there wasn’t one. The vet was serious.  Hmmm, maybe he had seen a ghost.

I’ve shared the story about my own paranormal experience of seeing a ghost on the stairwell of my attic office. If you recall that story, Riley, my Bernese Mountain Dog mix, saw the ghost first and wagged his tail at him.

Ghosts and pets…what an interesting combination.

An article in The Knoxville Focus by Michael Williams focused on the unsolved mystery of the death of Lillian Haynes in 1928. Williams does a great job in laying out all of the pieces of the puzzle in his article. At the end of the article, we discover that perhaps Lillian has not been content with the bumbling efforts of law enforcement and has decided to take matters into her own hands, so to speak.  According to Williams, residents of an apartment complex that used to be the shoe factory owned by the deceased have encountered strange paranormal phenomena.

“April W. moved into a small apartment at the Kentshires in 2012. In an October 2016 interview, she shared her experiences with those she refers to as “the Shadow People.” She felt the rent was reasonable which would allow her to save some money. The complex was centrally located and in close proximity to her job at a nearby Mexican restaurant. Several of her co-workers lived there as well. Soon after moving in April began hearing footsteps through her apartment.

She spoke to several co-workers that lived in the complex who each told her they heard footsteps in their apartments as well. Days later she heard what sounded like the front door opening followed by footsteps coming down the hallway to her bedroom.

One afternoon April watched her dog as he pursued an unseen presence. She observed the dog looking up as it followed an indiscernible manifestation. The dog finally came to the wall and reared up on its hind legs reaching toward the ceiling with his fore paws.  Nationally renowned paranormal historian, J-Adam Smith was particularly intrigued by the pet’s peculiar behavior.

“Animals are highly sensitive creatures,” Smith said. “Throughout history, they have had an awareness of seeing through the veil that separates the world of the living and the dead. I had a personal experience with a dog’s behavior at a home I purchased in Florida that was uncharacteristic of the dog’s typical behavior. He began growling in a protective nature at a wall.  By recognizing the behavior being protective, I decided to burn sage which calmed the animal down and improved the emotional energy within the home.  Do not disregard your pet’s behavior it could be a sign of warning from them to you.””

In a post on “Jim Harold’s Virtual Campfire” Facebook page, someone else had a pet who also had an encounter with a shadow person. “Several years ago I was taking my beagle for his afternoon walk. He was an even-tempered dog who almost never growled. We were at a corner, and I was trying to decide whether to turn or continue straight when my dog growled. I looked where he was growling and what I took to be a man was coming towards us about half a block away. I couldn’t make out any details, it was like he was silhouetted against the setting sun. What I could distinguish was that he was, curvy is the best I can come up with. Sinuous. I was creeped out, especially with my dog continuing to growl. I turned the corner and kept checking over my shoulder, but the man/figure never reached the intersection.

My beagle didn’t settle back down into the serious business of sniffing for over a block. And that image has stuck with me all these years.”

A poster on city-data.com  shared this story, “Okay, so one night after I had been reading a lot of online articles about the Mothman (not recommended just prior to bedtime), two things happened that woke me up: my dog, who never, ever barks at night, started making this low bark/growl/moan kind of sound, and at the same time, our fax machine a few rooms away started ringing like a fax was coming in. Having been awakened at that point, I looked towards the bedroom window, which had a translucent shade on it, and just outside the window I saw the outline of a person. It was standing as though it was turned towards the window. It was in the shape of a man, around 7 feet tall, and appeared to be wearing a men’s hat of some kind. (It actually kind of had the silhouette of one of those trench-coated detectives from a 1940s film noir.) It gave me a terrible start. I turned away from the window and closed my eyes and just hoped it would go away. And then (anticlimax ahead) I fell back asleep. The next morning I looked at the fax machine and a fax had come in. The page had no message other than the heading that said at 2 whatever AM, a fax had come in from Unknown Sender, with the fax number left blank.”

So, for some good news. A Medical News Today article quotes a survey of more than 2,000 pet owners in the UK and finds that over 30% of them believe their pets protect them from ghosts and spirits.

Here’s more from the article: “Many pet owners reported that their dogs or cats alert them to a supernatural presence by barking, growling or staring at nothing, or by backing away from something that cannot be seen. Some respondents said their pet also displays flared neck fur when a spirit is nearby.

Among dog owners, around 25% said they have seen their four-legged friend bark or stare at nothing at least three times during the past month.

Around 25% of cat owners said they saw their feline hissing or growling at an empty space twice over the past 4 weeks, while other respondents said they have seen their cat follow an invisible presence around a room with their eyes.

Some respondents also reported seeing their pets behave oddly around areas where someone has died.”

I have to confess that I have also witnessed my dogs playing cruel tricks on visitors who were afraid of ghosts. A dear friend would often house sit for us when we had to go out of town.  This included watching the two dogs and two cats.

Because our house is fairly active, he chose to sleep on the couch in the living room rather than venture upstairs to one of the bedrooms. But he told us that every night both dogs – Riley and Brodie – would walk over to the front stairs, stare up at them for several minutes, and then bark several times.  Then, after they’d freaked our poor friend out, they would calmly walk away and lie down.

As much as I’d like to believe it was the ghosts making sure the house was safe while we weren’t home, I would venture to say it was more likely that the “boys” were playing a trick on our hapless friend.

6 thoughts on “Pets – A Ghostly Gage”