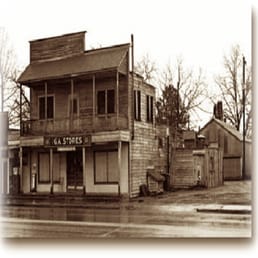 Here in the Midwest, it’s finally acting like spring.  We have rain instead of snow, the temperatures are in the 40s and 50s, instead of the 20s and 30s, and I can actually see green sprouting up through the brown ground.  So, when I was thinking of this week’s Freaky Friday, I was thinking “Spring!”  But Old Town Spring might not be what you expected.

Old Town Spring is just north of Houston, Texas and some have claimed that it’s the Ghost Capital of Texas. That’s saying quite a bit, considering how the folks in Texas – both dead and alive – like to do everything in a big way.

According to Christina Delay at South Writ Large the hauntings date back to long before the town even existed. “Long before modern day, Old Town Spring existed, it was the winter camp of the Akokisa Indians, known throughout the region as hunters and gatherers and tribe eaters. Since the time of the Akokisas, Old Town Spring has been involved in shoot-outs from the railroad, the Civil War, a high criminal hanging rate, and has experienced countless unexplained fires.”

But why would a place that was inhabited by hunter/gatherers be Perhaps the description of the Akokisa (also known as the Atakapa Indians) through Access Genealogy might offer a clue. “Atakapa Tribe: Meaning in Choctaw and Mobilian, “,” because they and some of the Indians west of them at times ate the flesh of their enemies.”

Wikipedia gives us a little more information. “A French explorer, Francois Simars de Bellisle, lived among the Atakapa from 1719 to 1721. He described Atakapa cannibalistic feasts which he observed firsthand.  The practice of cannibalism likely had a religious, ritualistic basis. French Jesuit missionaries urged the Atakapa to end this practice.

The French historian Antoine-Simon Le Page du Pratz lived in Louisiana from 1718 to 1734, a total of 16 years. He wrote:

Along the west coast, not far from the sea, inhabit the nation called Atacapas [sic], that is, Man-Eaters, being so called by the other nations on account of their detestable custom of eating their enemies, or such as they believe to be their enemies. In the vast country there are no other cannibals to be met with besides the Atacapas; and since the French have gone among them, they have raised in them so great a horror of that abominable practice of devouring creatures of their own species, that they have promised to leave it off: and, accordingly, for a long time past we have heard of no such barbarity among them.”

Maybe they got better, but I have to believe that being someone’s feast would encourage you to come back and haunt the area where dinner was served.

Chron. Com interviewed a resident of Old Town Springs who lives with one of the resident ghosts.

“Randy Woods is a former assistant press secretary to President Gerald Ford. He had a 10-year career with The Woodlands Development Co. So it can be jarring to hear him tell the tale of Sarah, the ghost who shares space with Woods in a converted barn in Old Town Spring where he runs the Spring Souvenir, the town’s newspaper.

“In most cases, people are born, they live, and they die, then go onto heaven or hell, whatever their religious beliefs might be about the world hereafter,” Woods said. “In some few cases, however, people are born, live and die, but do not move onto the next world.”

Woods has learned so much about Sarah and others who haunt the area’s historic homes and businesses that he began conducting the Walking Ghost and History Tour of Old Town Spring three years ago. The 90-minute tour is usually given Friday evenings, but Woods can schedule it by appointment. All that’s required is a group of at least five people, $10 each and the nerve to visit the sites and their spooky inhabitants.

According to his research, Sarah was a 12-year-old friend of the Doering family, who owned the barn in the 1930s. She fell from the hayloft while playing and suffered a broken leg. Gangrene set in and she died less than a month later, Woods said.

Now, he supposes, she inhabits the barn, waiting for her playmates to return to resume their childhood games.

“On those things that you cannot explain away by physics, you finally have to say to yourself, `If not ghosts, then what?’ The explanation of paranormal activity seems to fit for me. It doesn’t mean that people who believe in ghostly occurrences are kooky or off their rocker or anything. There are just too many things that have occurred that science cannot explain, so I’ve just accepted this and moved on,” he said.”

Fiona Broome of Fiona’s Broome’s Guide to Ghost Hunting has accepted the haunted history of the town too. “There are several locations that fascinate me, but one of the best is the old bank building.  It’s no longer a bank, but it’s part of the retail district in Old Town Spring.

The bank is easy to recognize: It’s the brick building with bullet holes, in the middle of the 100 block of Midway. It’s on the same side of the street — and just a few doors from — the haunted Wunsche Bros. Cafe and Saloon.

…You can see bullet holes in the bank’s brick exterior. The Spring State Bank was the site of at least two robberies involving gunfire. One may have featured the famous team of Bonnie & Clyde.

In January 2006, the bank building was empty once again. Shops move in, and soon move out.

I’m not sure anyone would say that the building’s ghosts are a problem or even real, but — with a violent history like this — it’d be odd if there wasn’t some haunted energy there. We keep revisiting this building because there’s something there, inside and outside the old bank.

Sure, there’s residual energy. After two gunfights, that’s normal for a town with the “wild west” history of Old Town Spring.

But, my “gut feeling” says there’s at least one figure walking around inside that building, after dark.  In most cases, when that feeling is worth mentioning, investigations prove me right.”

Christine Delay’s experience offers more specific insight to the town. “Whitehall House was, in 1933, a funeral home. A funeral home that now has a designated ghost room on the second story. Many sightings have been reported of a man walking across the balcony at night, or a couple swinging together on the porch swing. In the years since, the home has changed hands numerous times.

One story goes that a new owner decided to renovate the ghost room, disbelieving the spirited history of the house. Just an FYI, ghosts don’t like most decorators. Especially not in their private quarters. The owner experienced “violent spirit activity,” and it took many years for the ghostly couple in the upstairs room to calm down and return to their quiet ways. Now there are two clauses in the rental agreement for Whitehall House: the ghost room is not to be disturbed, and renters are not allowed to break their lease because the house is haunted.”

Luckily, Christine was accompanied by a friend, a sensitive, on her tour of Old Town Spring who gave her a look beyond the normal. “Down the street, our guide stops in front of a large tree.

Susie immediately backs away from the tree. “What happened here?”

I look from her to the tree to our guide, wondering what I’m missing. It’s a tree. A big, beautiful tree.

I should mention here that Susie, who writes fantasy and ghost stories, is a sensitive . . . and this is not her first ghost rodeo.

Our guide stammers, clearly taken aback that Susie can sense something. “That is the hanging tree.”

To the other side of the street.

The tree, while beautiful, served as a form of justice for violators of early Texas law. One of the local judges hung more than sixty criminals on that tree in his time, a very high hanging rate by anyone’s standards.”

But do normal folks taking the tour “feel” anything?  I’m glad you asked that question!

Taken from one of my favorite research spots, TripAdvisor Reviews:

I capture it on my phone. It’s amazing.

My husband and I went on the tour last night. The guide was amazing, and the crowd was pretty cool too. My husband captured an orb in one of the buildings that used to be a morgue, I capture the little girl ghost Marilyn who died of gangrene in the red barn. I was a skeptic before but not anymore. I don’t know who else from the trip that captured something, but I showed everyone the picture I took, everyone was floored. I send the pictures to the FB page. At the end of the trip, the guide told me that I was lucky to capture two apparitions. I am floored and still shock from what I captured. Highly recommended.

Did the ghost tour a few months after moving to the area. I believe in ghosts and spirits but ones that are benevolent vs maleficent. I was a bit skeptical in that I would capture anything on my digital camera, but I actually did catch a few things that scared me after reviewing my pictures at home. The tour itself is informative and entertaining. We did the 12am tour thinking that it would be more authentic, and it was. I’d recommend doing the tour in cooler months as we did this tour in July during a southern Texas summer = Hot and Humid! Overall Great tour!

I really enjoyed the tour, Eve was an amazing tour guide. The History behind the stories was fascinating, they really do their research on the history behind the stories. While we didn’t encounter any ghosts during the tour, we did catch an amazing apparition on camera when we went back and looked, my sister-in-law was in the picture taking a picture of a house and we caught a woman sitting in a chair on the porch, sent chills down our spine! I wholeheartedly recommend them!

My family attended the Old Town Spring Walking Ghost Tour on Halloween night. This was a very informative and professional tour that was led by an expert in paranormal activity. We experienced some UNEXPLAINABLE PHENOMENON while on the tour that had this skeptic questioning what just happened by the end of the tour. Additionally, we learned some interesting “old west” history of a local town that added color and perspective as to why there would be paranormal activity in this location.

Ghostly Energy Shows in My Photos!

Eve Hallows was our tour guide and led us through a fun and interesting tour of the haunted places in Old Town Spring. As we got to our 2nd stop, my cell phone started acting up, I was able to take pictures, but it kept getting stuck. We hit the ice house and I decided to review my pictures and was quite surprised at what I found. Definitely something was going on. I had regular photos and then photos with white bands shooting through them or ‘misty” type fog going across in bands. One shot even had a white “form” in air by roof of building. Had an amazing time with my husband and teenage son. Definitely would do again.

From early American cannibals to cowboy specters of the old West to the ghosts of Bonnie and Clyde, it seems that Old town Spring has a haunting for any era you’d like. That is, if you like to be haunted.