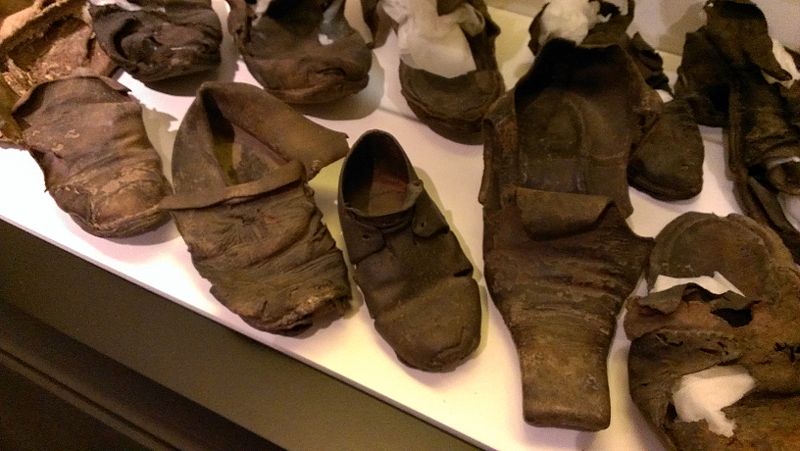 A couple of weeks ago I was watching one of the new episodes of Kindred Spirits, a paranormal television show I really enjoy.  This episode was called “Watch Over Me” and if you click on the link, you can find more about it. But basically (no spoilers) there is an old shoe in the old attic in this OLD house and the current owner gets the heebie-jeebies every time he’s near the attic. So, he actually boards up the attic.

Speaking as a member of the “Attics Aren’t All That Bad” Society, I feel I have to stand up for old attics. But I just have to say, this was a really creepy old attic.

The shoe was made of leather, and it was worn and dilapidated. It had a heel on it and was boot-like. Amy Bruni thought it was from the Victorian Era. Later she was able to dig up information that people in the 1700s and 1800s would leave well-worn shoes in walls (or attics) because the shoe was supposed to dispel evil spirits. The other thought was that the shoe held the essence of the former wearer, so evil spirits would be tricked into looking for the shoe (and then caught in the wall or attic) rather than looking for the person. Kind of like a mousetrap for evil spirits.

Imagine my surprise when a couple of weeks later, I saw an article from Wildhunt.org entitled “Remnants of witchcraft found in old cottages.” And there in the middle of the website was a photo with at least a dozen old shoes that were found in old houses. Shoes that the people who renovated the homes decided to TAKE OUT OF THE WALLS!

Let me share with you just a little bit of the article.

““Chloe Summerville, who runs the Magpie’s Nest in Glastonbury, reported that she and her partner had found items in their old cottage when they undertook renovations.

Summerville told TWH, “We found in our blocked up inglenook fireplace, a pair of old leather boots and a large waxed glass jar with some sort of dirty looking liquid inside. On closer inspection through the glass we could make out horseshoe nails and what looked like fish skin or something with scales. I never did open it; I thought the liquid might have been piss! I put it in the shed and over the years it just kinda vanished. I never knew where it went. Also, lots of knotted string hung on nails behind the main wooden beam, which I left there, they are still there now, and someone has carved 1782 in the wood.”

Summerville went on to say, “Our house is sometimes a little creepy, we often have running around upstairs on the landing only to go up expecting the kids to be out of bed, but they never are.””

Well, if you had left the old leather boots in the wall, you might not have spirits running around upstairs.

I also learned from the article that there is actually a museum in Northampton that has an index of concealed shoes. Why just an index?

“We occasionally accept concealed shoes as a donation, though most people who find them put them back ‘just in case!’”

Very wise museum curators. And very wise renovators. The folks at the museum go on to explain why they believe the shoes are hidden.

“Shoes have a special significance. A shoe is the only item of clothing that takes on the shape of the person wearing it. It is container shaped and it is thought people believed that it held something of the wearer’s essence even when it was not being worn, so that the good spirits contained in the shoe would ward off evil spirits.”

If any of you have teenage boys, and you opened their gym bags, you would understand the whole shoe and their essence thing. It’s a real phenomenon.

So, if you decide to renovate and you find an old, worn, chewed-up-looking piece of leather that might have been a shoe. Put it back in the wall and close it up. Please, don’t be a heel. (I just had to do that!)