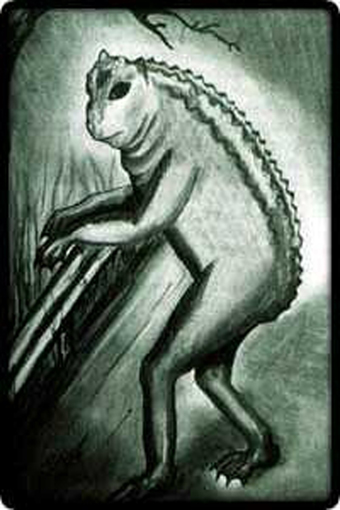 Why is it whenever I hear the word “monsters” anymore, the voice in my head is the Gingerbread Man from Shrek? “You’re a monster!”

Here we are, back in Ohio, and today we are going to be exploring one of Ohio’s favorite monsters. My starting off website is Akron Ohio Moms website, a page that features Ohio’s 11 Unbelievable Monster Sightings.

The first monster on their site is the “Loveland Frogman.”  First sighted in 1955 by a traveling salesman, (I can already hear the bad jokes) the Frogman apparently has leathery green skin, webbed hands, webbed feet, and stands about three feet tall.  Not only that, there were three of them huddled together according to the first reported encounter. Although, it happened at 3:30 a.m., so can we really trust the veracity of his report?

As strange as it may seem, since then there have been numerous reports of similar frogmen near the city of Loveland. Most of these sightings occur near the Miami River which runs through Loveland. And, even more curious, several police officers have seen these leaping amphibian cryptids.

The website “Weird U.S.” actually shares one of the police encounters.  Two Fortean investigators, Ron Schaffner and Richard Mackey, interviewed the officers.  This is a summary of what they learned:

The incident took place on March 3, 1972, at 1:00 a.m., on a clear, cold night. The first officer on the scene was Ray Shockey.  He was driving back to Loveland along Riverside Road when he saw what he thought was a dog near the road in a field on Twightwee Road. He realized it wasn’t a dog when it stood up and the headlights from his car illuminated its eyes. The thing stared at him for a moment, then bounded over a guardrail. The creature went down an embankment and into the river.

Being a smart police officer, Shockey drove to the police station and got some back-up. Officer Mark Matthews returned with him to the river to look for evidence of the creature. All they could find were scrap marks leading down the side of the embankment.

Shockey described the creature as about sixty pounds, standing three to four feet, and having textured, leathery skin and a face like a frog or a lizard.

Who knows what Matthews thought about Shockey’s experience at the time. For all we know, he could have thought Shockey imagined everything. But then, fourteen days later, when Officer Matthews was driving outside of Loveland, he saw an animal lying in the middle of the road. He stopped in order to remove what he thought was roadkill from the road.  When he opened his door, the animal got up, hobbled to the guardrail, and lifted its leg over the fence in order to escape. Matthews said the creature kept his eye on him the entire time.

Shockey’s sister drew a picture of the frogman from her brother’s description. It clearly shows a bipedal, frog-like cryptid.

But the story isn’t quite over. In August of 2016, WCPO News reported on another Frogman incident. According to their report, Sam Jacobs and his girlfriend were playing “Pokemon Go” in Loveland between Madeira Road and Lake Isabella.  (For those who are not familiar with Pokemon Go – it’s an augmented reality mobile game using GPS on your phone to locate, capture, battle, and train virtual creatures which “appear” as if they are in your real-world location. You might recall hearing about a myriad of accidents because players were so focused on their phones, they would step out into traffic.)

So, back to the story.

Sam and his girlfriend were out searching for Pokemon late one night when they looked up and saw the Frogman.

“We saw a huge frog near the water,” Jacob wrote in an email. “Not in the game, this was an actual giant frog.”

They stopped playing the game so they could take photos of the creature and try to shoot a video.  But, it seems, the creature wasn’t too happy about that.

“Then the thing stood up and walked on its hind legs. I realize this sounds crazy, but I swear on my grandmother’s grave this is the truth,” he wrote. “The frog stood about four feet tall.”

When they returned to his girlfriend’s house and related the story, her parents told them about the legend of the Frogman. Jacobs had no idea something like that existed.