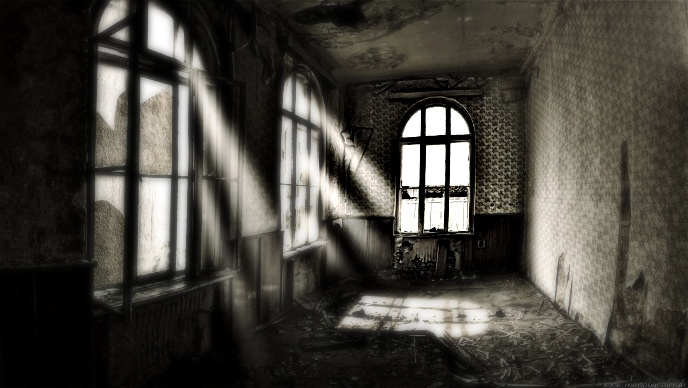 Last week we started our journey into the weird and wonderful paranormal happenings in Ohio.  And, I really was going to write about something else this week – until I found this amazing story by Chris Bambam on the Astonishing Legends Facebook page. I contacted Chris and he was kind enough to let me share it with all of you.  Thanks, Chris!!!

So, here’s his story.

So, there is a house in Ohio that is incredibly creepy and haunted. A coworker’s mom lived in the house for a short time when she was a child and refuses to talk about the time she spent there. Another of my friends grew up down the street, and as far back as he can remember people have moved in and out of the house like crazy. At one point, the sheriff bought the house with the intention to renovate it and rent it out. His pet was a retired K9 Unit. Supposedly the dog would refuse to go upstairs to the second floor, no matter what the sheriff did, and would sit at the bottom of the staircase and growl and bark at the top of the steps even though nothing was there. (Edited to add – nothing that they could see!) To our knowledge he was the last one to own the house, he moved out suddenly.

Probably about 10 years ago a group of my friends and I decided we wanted to check this place out. When we went to this property, we found that we could enter easily through the cellar doors. Naturally, being 18-19 years old we decided to go in. The basement was creepy, but nothing special. Very old dirt flooring, with a weird chain screwed into the ground and scratches going up the foundation of the chimney. Creepy, but nothing too weird as we determined that the chain was probably for a dog at one point and the scratches could have been from a dog or put there to be creepy by another group of teenagers.

We then ascended the staircase to the main floor of the house, and this is where it gets weird. There are walls half torn down, dried up cans of paint, and a ton of tools that you can tell haven’t been moved in YEARS. Dust on everything, no one had been in that house for some time. As we’re walking around wondering why people would leave tools and cans of paint to dry up, we heard a very loud noise from upstairs on the second floor. It was as if a big piece of furniture got dragged across the floor. We immediately figured there was someone in there with us, and my friend John and I (being martial artists and knowing how to defend ourselves) right away started for the stairs calling for whoever was there to come out. I will admit in hindsight we were very dumb to charge an unknown, possibly very drunk/high dangerous person, but we were young and invincible at the time, haha. Anyway, we ran right to the room we heard the noise from, directly above the family room. No one was there. We then searched all of the other rooms to find that there wasn’t anyone else there.

What was there, was a very old, metal, heavy bedframe. Out of curiosity I called down to my friends to tell me what this sounded like and dragged it across the floor. It was the exact noise. I have heard that same sound on six separate occasions, each time no one was in that room. Next, as we were in that room discussing the noise (all of us were there now) we distinctly heard someone walk up the stairs and down the hallway towards the room we were in. At this point, we were all in-between being super excited at having something paranormal happen, and being very, very freaked out. We began to explore the house more, and what happened next is something I will never forget.

We heard a car engine rev up on the road below the house and got worried a cop was pulling up the grass driveway up the hill. I rushed into one of the rooms to look out the window. As I was watching nervously for a car, I heard a whisper in my ear and felt the breath on my neck and ear. You know the feeling when someone is uncomfortably close and you kind of flinch away? That’s what I did. I couldn’t understand what my friend said, so I turned around right away and in an annoyed voice asked what the hell he just said. The weird part was, no one was in the room with me.

I immediately got chills and called for my friends. My friend Evan popped his head around the corner into the room and asked what? I asked him and asked all of my friends repeatedly if one of them was in the room with me, and none of them were. I know they weren’t, but I had to ask multiple times because I couldn’t believe what I heard and felt. I still can’t explain it, except that there is definitely something in that house. I have probably been inside at least a dozen times and have at the very least heard someone walking around in areas that I know 100% no one was. It’s definitely a creepy house and has that horror movie vibe and location.

I will end on a bit of cool folklore about the house. I can’t find any info actually proving this, but supposedly during the prohibition, the house was a hideout for rum runners and robbers. There was a gang hiding there, and one of the members got greedy and wanted the money for themselves and tried to kill the rest of the gang. Supposedly they all ended up killing each other in a shootout, and the money they stole is buried on the property somewhere still. The feeling I have gotten in the house was never menacing, but perhaps it’s one of those gangsters looking for their lost money?

I got chills when I read Chris’ story – I hope you did too.  I have to give Chris LOTS of credit for going back and exploring the house again and again. One whisper in my ear in a dark and scary room and I would have been out of there forever.  How about you?