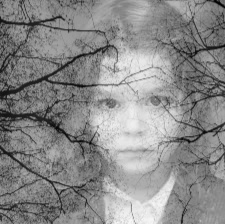 Last November, I wrote a Freaky Friday about some of the creepy and unexplained things children say. I thought it was time to find some more creepy things – you know, before we are all out of lockdown and can’t be as freaked out as well.

I was playing with my two-year-old in the backyard when it started to get dark out. I picked him up and put him on my shoulder to walk him to the house and he started laughing hysterically at something behind me. I asked him what he was laughing at and he said, “Daddy’s grandma is funny!”. This was on the 10th anniversary of her passing away.

Halfway through the night, my friend heard screaming from his 5-year-old daughter’s room. He rushed over to her, hugged her, and asked her what was wrong. She was squirming and kicking him in the face. He asked her what is wrong for the last time with a hard look on his face, and she replied with a scared tone and tear-streaked face:

Satan is coming to us!

Then she kept on screaming.

My cousin and I were talking in her living room once while her toddler was giggling in her room and listening to a Spanish nursery rhyme on TV. After it got quiet for over 5 minutes she went to check up on her boy and he told her he had turned off the nursery rhyme because “Ariel didn’t like the song.”  We don’t even know an Ariel and we ignored it. The next day she played it again for him and he came running and said “No mommy, no! No, Ariel is asleep!” She asked him who “Ariel” was and he grabbed her by the hand and pointed at the attic entrance in the closet. I wasn’t there long enough to know what happened after because I ran away.

My 3-year-old looked out the window into the complete darkness and told me someone was outside. I couldn’t see anything and eventually stepped out of my front door and looked around. When I came back, she said they were still there and have blue eyes.

She’s now 4 and a half and has never said anything like that again.

We moved into a new home when my son was three. We only had some basic furniture moved in (mattress on the floors, the sofa, and some dishes in the kitchen) and had been in the home maybe two nights. My son’s room is upstairs. He came down the stairs crying, so I asked him what’s wrong. He told me, “He’s scared of the man with the painted face in his room.”

I immediately get chills and go upstairs to investigate. Couldn’t find anything in his bedroom or upstairs that resembled a man or a painted face. It still gives me chills whenever I think of it though.

We lived in a house that was built in 1912, and my not quite 2-year-old daughter would often seemingly talk to herself in her room, which used to be the attic of the house. One day I walked by and saw her sitting on the floor of her room facing the open door of her closet, seemingly having a conversation with someone. She was answering both open and closed-ended questions; it was very weird. I asked her who she was talking to, and she told me that it was “Old Jake.” Old Jake hung around for a couple of years; we would see her giggling and responding to yes or no questions as she played alone in the house.

I don’t have kids, but I am working at a restaurant as a busser. A few weeks ago, some little kid was grabbing some candy he said “hi” to me and I said, “Sup lil man.” Then he asked me, “How’s Fluffy?” Fluffy was my rabbit that died 4 years ago. I’ve never seen this kid in my life.

At the time of this incident, my friend’s grandma had recently died. His little sister was talking in her bedroom alone middle of the night. I look at my friend and said, “Who’s your little sister talking to?”

My friend goes to her bedroom (as I listen from his room) and asks, “Who are you talking to?” And she replies, “Grandma.” My friend says, “Grandma isn’t in your room.” She said, “She’s right there!” And pointed to the corner of her room. My friend is creeped out and tells his 4-year-old sister “good night.” Before he can leave the room, his sister calls out, “Grandma said that she loves you!”

This gives me creeps still today!

Hope these all gave you the creeps!!!