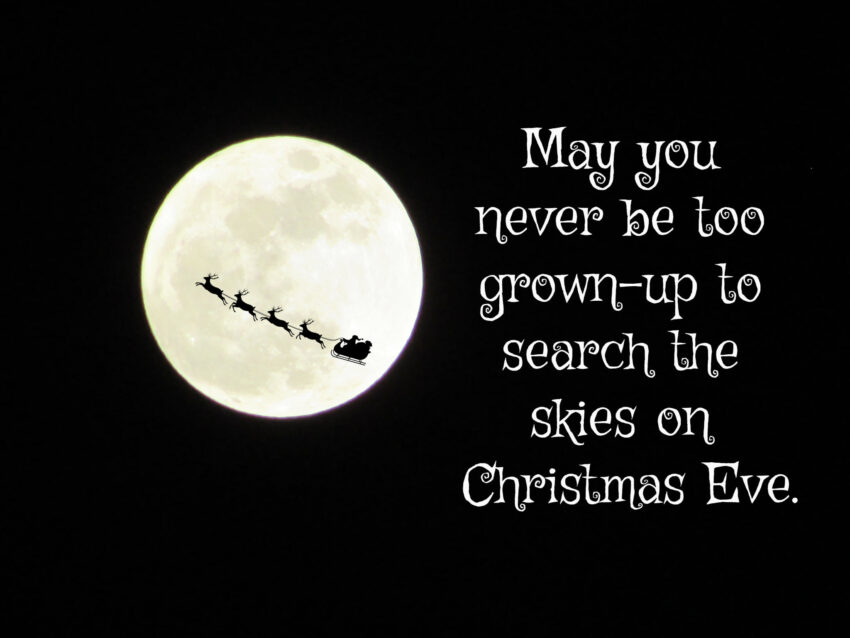 I really thought that last week was my last of Christmas Paranormal stories, that is until The Singular Fortean Society sent me their newsletter with the headline “Witness Reports Childhood Sighting of Santa’s Sleigh.”

On their blog, they interview Holly Pearce, 24, from Lancaster, Ohio (can I just add that many, many strange things happen in Ohio) who swears she saw Santa and his reindeer one Christmas Eve night when she was eight years old.  This is a little from Holly’s account, “I was probably 8 years old, and we were leaving the 11 p.m. Christmas Eve service at our church in Lancaster, Ohio. I had been obsessively tracking Santa on the NORAD website all day and was looking forward to getting home so I could crawl into bed and stay up as late as possible; listening for sleigh bells or hooves on our roof, like I did every year.

I was the first person out of the church when the service was over, because what little kid wants to stay in church on Christmas Eve? It was a clear, cold night, and the stars were gorgeous. So, I was admiring the stars when I saw a kind of shimmering out of the corner of my eye. I looked and saw what I can only describe as Santa’s sleigh. It looked just like it does in every movie. It was pulled by reindeer, and it left a trail of glowing glitter behind it that faded quickly. I don’t remember if I heard sleigh bells or not.

It happened so fast, but I was absolutely SURE of what I saw. I kind of stood there in shock until my parents came out. I told them what I had seen, and they basically said “Well, we’d better get home and get to bed so he doesn’t skip our house.”

Over the years, I kind of began to doubt my sighting; chalked it up to a shooting star and wishful thinking. But as I’ve gotten older and become more open-minded about the nature of the universe and the paranormal, I’ve accepted my experience for what it was. It was Santa’s sleigh.”

The interview continues with Holly (and can I add once again – what a great name for someone who has actually seen Santa!) and Paranormal Investigator Tobias Wayland. Check out this link to read the rest.

But you are probably saying or thinking, one experience does not a paranormal phenomenon make. Right?

Well, the folks at liveabout dotcom have more than a dozen more eyewitness stories about their own experiences with the jolly old elf. Here are a few:

I am 14 now, but this happened back in 2000 in my old house in Bristol, England. I was with my mum and dad and my sister. It was about midnight on Christmas Eve and I was the only one awake because I was really excited. I could hear these big footsteps in my living room. I was quite scared, and I could also hear bells tingling above me. So, I wanted to see what was going on.

I walked down the stairs very slowly and I could see this big man putting presents around my living room. I wanted to say something, but I was too scared to do it because I thought he would be angry. I ran back upstairs and went back to sleep. I was so convinced I saw the real Santa and told everyone in the morning: but no one believed me. — Alex H.”

It was Christmas Eve of 2002 in New York City. My parents had invited some friends and relatives over for dinner, sort of like a Christmas Eve celebration. After that, I decided to go to my room to watch some television, but there was nothing good to watch. I then found myself pacing back and forth in the hallway. My house is big, so there was no one with me. Everyone was in the living room watching a movie I wasn’t interested in.

About seven minutes into my pacing, I saw a tall, fat figure scurry away about 20 feet away from me. It was crouched down, too. It was even wearing some sort of Santa Claus suit. I didn’t believe in Santa, but this just freaked me out. There was a strange man in my house!

I quickly ran to where my parents were and told them all about it. They grinned at me and said jokingly, “Maybe it was Santa Claus.” I didn’t believe that, so I just sat down in the living room with my family and everybody else.

Then it occurred again on Christmas Eve, 2004. I remember it more vividly than the last one. I was lying on the couch in the living room. My parents were in the kitchen having a conversation about a business blog or something. Suddenly, I saw a huge man, about seven or eight feet tall, crawl underneath the tree and just vanish. Before it disappeared, it looked at me and said, “Shh.” Very strange, so I went into the kitchen and sat with my parents.

Similar happenings occurred the following Christmases. I recall one in 2007, it was daylight this time and I just happened to see another tall figure with a Santa hat trudge by me for two seconds, then it was gone. This really happened! — Claxton Kalmbach”

An old friend came to see me a couple of weeks ago. We lost touch years ago, but he managed to trace me, and he brought me a Christmas card. After a few minutes, I asked him if he remembered the Christmas Eve about 30 years ago when we were outside our houses. We grew up next to each other.

It must have been around 7.30 p.m. on a clear night when we suddenly heard a bell or bells in the distance getting closer real fast. As we both looked up, there was the reindeer, the sleigh, and Santa flying very fast and low over my house. It was brief, but we both ran to tell our families. Of course, everyone laughed, but I tell you it was real!

So when my friend turned up I asked him if he remembered, and he said of course he did… but he didn’t like telling people about it now. You can imagine why! — Jimmy”

So, after reading all of these reports, what do I think?

I love the idea that there might be a paranormal entity whose whole purpose is spreading goodwill and kindness throughout the world.

Besides, Mary O’Reilly told me he was real.

2 thoughts on “Is Santa Real?”