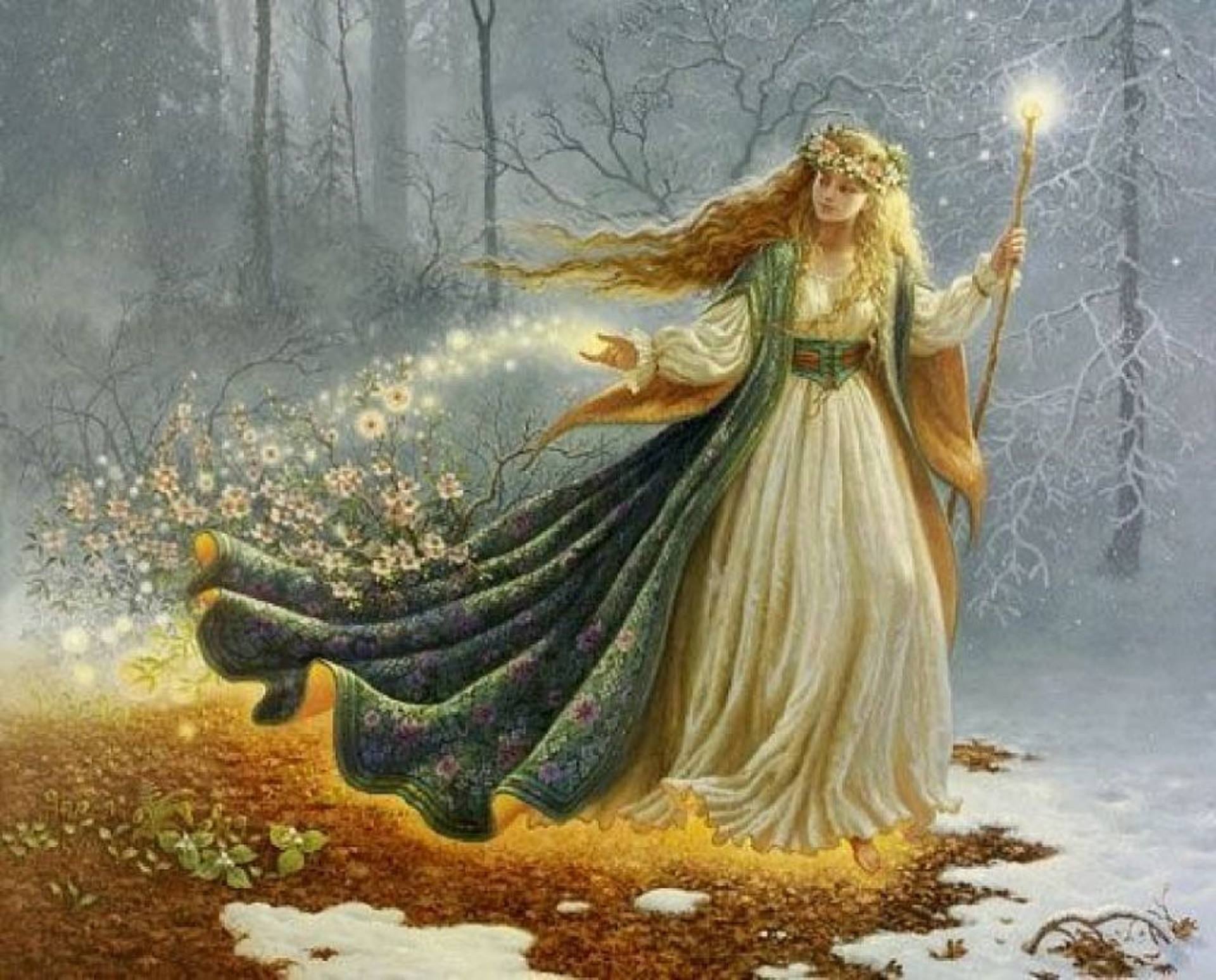 This week much of the United States has had snow and cold temperatures from coast to coast. Even Hawaii got snow on the summits of Maunakea and Mauna Loa. And my friends in Arizona were sharing photos on Facebook about the snow they received. Here in the Midwest, we got both snow and bone-chilling temperatures. I can hear the snow crunch beneath my feet, like walking on styrofoam, as I go out to take care of the chickens.  The fields around my house look like a frozen tundra, but at least Brodie is happy about the snow.

So, I decided that this week’s Freaky Friday we all needed to think about something warmer and give us hope that winter is not going to last forever. A traditional Gaelic festival, and the forerunner of Groundhog’s Day, is Imbolc. Imbolc is celebrated on February 1st through February 2nd – so, this Monday through Tuesday!!  Happy Imbolc.  Or, um, Merry Imbolc! I sure hope you got your Imbolc Cards out in time!

What is Imbolc? I’m glad you asked that question. It’s a time of weather divination. And with the Gaelic, there is no soft, cuddly, and rather round rodent at the center of their celebration as we have with a groundhog.  No, their tradition is much manlier, as they watch to see if serpents or badgers come out of their dens.  (Why am I picturing Mel Gibson yelling, “Freedom!” while looking down at a badger hole?)  And if a serpent or badger appears, then spring was just around the corner and, of course, in the case of one of those creatures appearing, I’m sure the celebration also included a quick retreat from the festival area.

Another tradition of Imbolc centers around Cailleach. Cailleach is a divine hag, associated with creation and weather. In Scotland, she’s known as or the Queen of Winter. On Imbolc, Cailleach gathers her firewood for the rest of the winter. Legend has it that if she wishes to make the winter last longer, she will make sure the weather on Imbolc is bright and sunny, so she can gather plenty of firewood. Therefore, people would be relieved if Imbolc is a day of foul weather, as it means the Cailleach is asleep and winter is almost over.  In my opinion, this is much less dangerous than standing in front of a badger hole, enticing it to come outside.

When I was researching the Order of Brigid’s Cross, I read a lot of old historical writings about the fae – or the Tuatha de Danann. I really like the explanation of the Tuatha de Danann on the website called Connolly Cove it succinctly lays out the information I’d read in some of their ancient texts.

“Tuatha de Danann was a magical race with supernatural powers. They represented ancient Ireland, for they were the folks who lived in Pre-Christian Ireland for centuries. Before their unexplained disappearance, they stayed in Ireland for around four thousand years. There have been more than a few claims regarding their disappearance; however, the truth remains unraveled.

It remains ambiguous how the Tuatha de Danann arrived in Ireland. Some sources claim that those people arrived by flying in the air and landing there. While traveling in the air, they were in the form of mist or fog. Other sources claim they arrived on dark clouds. The latter escorted people to believe they came from heaven rather than from earth. Surprisingly, some people professed that that race was actually aliens. The only rational opinion regarding how they reached Ireland was through ships and reached the shores of Ireland. One more claim was mixing between two of the claims. It states that the smoke or that fog in the air was actually the evidence where their ships burned.”

Why am I telling you about these people?

This is from the Wikipedia account of Imbolc: “Families would have a special meal or supper on Imbolc Eve. This typically included food such as colcannon, sowans, dumplings, barmbrack and/or bannocks. Often, some of the food and drink would be set aside for Brigid.

Brigid would be symbolically invited into the house and a bed would often be made for her. In the north of Ireland, a family member, representing Brigid, would circle the home three times carrying rushes. They would then knock the door three times, asking to be let in. On the third attempt they are welcomed in, the meal is had, and the rushes are then made into a bed or crosses.

In 18th century Mann, the custom was to stand at the door with a bundle of rushes and say “Brede, Brede, come to my house tonight. Open the door for Brede and let Brede come in.” The rushes were then strewn on the floor a carpet or bed for Brigid.

In the 19th century, some old Manx women would make a bed for Brigid in the barn with food, ale, and a candle on a table.

In the Hebrides in the late 18th century, a bed of hay would be made for Brigid and someone would then call out three times: “a Bhríd, a Bhríd, thig a stigh as gabh do leabaidh” (“Bríd Bríd, come in; thy bed is ready”). A white wand, usually made of birch, would be set by the bed. It represented the wand that Brigid was said to use to make the vegetation start growing again.

In the 19th century, women in the Hebrides would dance while holding a large cloth and calling out “Bridean, Bridean, thig an nall ‘s dean do leabaidh” (“Bríd Bríd, come over and make your bed”). However, by this time the bed itself was rarely made.

Before going to bed, people would leave items of clothing or strips of cloth outside for Brigid to bless. Ashes from the fire would be raked smooth and, in the morning, they would look for some kind of mark on the ashes as a sign that Brigid had visited. The clothes or strips of cloth would be brought inside and believed to now have powers of healing and protection.”

If you do a little research on Saint Brigid, you will find that she might actually be one of the last goddesses of the Tuatha de Danann, Brigid, and she was a fertility goddess. So, it makes a lot of sense that just before spring, those who still practiced the old religion, would want to welcome Brigid into their homes and lands.

If you Google “Imbolc recipes” it’s surprising what you will find. From cheesecakes to scones and from pudding to fish and chips, Imbolc is also a great feasting day. This information about feasting is from the Gather Victoria website:“Because the long arm of the invading Romans never managed to colonize Ireland, Brigid is one of the few goddesses whose worship survived the onset of Christianity. And although she was absorbed as St. Brigid and her feast day as the religious festival of Candlemas, many of her more “pagan” food rituals are still observed today.

Women would make a feast for the eve of the festival and a place was always set at the table for Brigid. Afterwards “A sheaf of corn and an oaten cake used to be placed on the doorstep on St Brigid’s Eve for the ‘wee’ folk (fairies) and also as a thanksgiving for the plenteous grain-crop and for good luck during the following year.”

According to Kerry Noonan, author of “Got Milk? The Food Miracles of St. Brigid of Kildare”, Brigid herself seems to be an “embodiment of a supernatural cauldron of plenty, a common motif in Celtic literature and legend…and in the Irish folk traditions surrounding her February 1st feast day, she wanders the land the night before, blessing house and barn.” Brigid not only distributed food to the needy, but created “miraculous solutions to common household problems, such as the feeding of unexpected guests, the replacement of lost stores, the care of cows and other food animals, and the successful production of dairy products.”

Gather Victoria goes into some specific about the legends and the food:

“Under her supervision cows give more than their usual yield, dairy churnings are increased to fill many vessels with butter, one sack of malt makes eighteen vats of ale, and the bread supply is always sufficient for guests. In some areas, an effigy of Brigit is made out of a butter churn handle and taken from house to house.  Kevin Danaher, in The Year in Ireland, states that on this feast day “butter always formed part of the meal and fresh butter was sure to be churned on the same day.

This was a time when the ewes began to birth, lactating the “new milk” or “Oilmec” which was sacred to the Celts. During Imbolc it was customary to offer this milk to Brigid by pouring it onto the earth to assist the return of fertility to the land. And it was also made into special cheese and baked into breads, cakes, and pies, along with other magical ingredients associated with the sun (such as egg yolks and honey) for the Imbolc feast.

Another centerpiece of Imbolc food was butter because the churning of butter with a dash (a staff or plunger) was necessary for the fertilization of the brídeóg (a doll or effigy of Brigid) so central to Imbolc fertility customs. In some areas, the Bridey doll was made out of a butter churn handle and taken from house to house. Kevin Danaher, in The Year in Ireland, states that Brigid’s Feast day “butter always formed part of the meal and fresh butter was sure to be churned on the same day.

By the late 16th century (when the potato first arrived in Ireland) a dish called Colcannon made of mashed potato, cabbage, butter and onion, joined the list of now traditional Imbolc dishes. And it was customary for the whole family to be involved in the mashing.

Another important food ritual involved the Bonnach Bride or Bannock of Bride (an oatcake made with fruits and nuts). These cakes or “bannocks” were made to attract health and prosperity for the coming year, and on day, mothers gave out these bannocks to girls who carried the Bridey Doll through the village going house to house. The Bonnach Bride was also eaten in the fields so that a piece could be thrown over the shoulder to honor Brigid and nourish the land.

Pancakes were eaten because, round and golden, they resembled the sun. This promised an abundant harvest of wheat and saving the last pancake in the cupboard ensured there would be enough flour to last out the year. Wishes were made while flipping a pancake in the air and trinkets were also placed into pancake batter as a way to divine one’s future prospects for the forthcoming year.

Brigid was believed to be a teacher of ‘herbcraft” and so many plants and flowers sacred to her, such as sage, heather, violets, rosemary and blackberry were often featured in Imbolc foods. Each came with their own magical purpose, rosemary and sage for example, brought their powers of purification and cleansing, so ritually important at this time of new beginnings.”

So, Happy Imbolc and don’t forget to make a wish while you flip your pancakes on Monday morning. I already know my wish – warmth and sunshine for all!