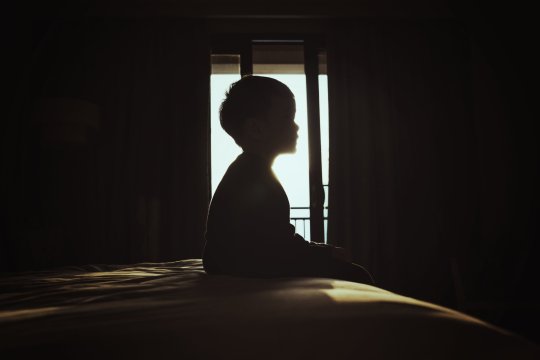 During the past few weeks, I’ve met some very interesting authors who have great stories to share- so I’ve invited them to guest blog. I met David Hatton through my Twitter account.
David is from Lancashire, England. He spent a year living in Chicago before traveling across America; his second home. He released his first novel, The Return, in 2018, which went onto to receive five-star reviews. He’s just released his newest book, The Medium. When he’s not writing, he enjoys walking and traveling with his partner, also called David.

I was ten years old when I saw my grandmother. She’d died a year before. We were really close, we visited every Sunday and frequently stayed at her house. A month before she died, I burst into tears and told my mum that I was upset as Grandma was going to die soon. She laughed as my Grandma Stella was fit and healthy, so we thought, and that she was going to have years left in this world. The last time I saw her alive, I remember I couldn’t stop waving as we drove away from her house. I wouldn’t usually do this but something in me kept waving as if this was to be the last time I saw her. It wasn’t.

Stella was a loving Grandma, I think she was making up for being quite cold as my dad and his brothers grew up. She frequently treated us grandkids. Her house was iconic; in the shape of a crucifix, designed by my Catholic grandfather who was an architect. I remember she had this huge beautiful garden, split into two with a hedge and a gate in the middle. It was like the secret garden as kids and brilliant for exploring and playing hide-and-seek but could be quite eerie when the sun came down.

A year later I was at home in my parents’ house. A simple two-up, two down semi-detached which is quite standard in Preston, Lancashire where I grew up in England in a working-class family. I woke up later in the evening. It was a summer night and the light burst through the curtains and everything within my room was clear. I could even spot my Spice Girls posters on the wall. At the end of the bed was a figure. It was dark but I could clearly make out my grandmother’s frame. She turned around and smiled at me. I screamed and hid under the covers, blocking all sight from my eyes. I was worried she’d say something; I was too young to consider that she wouldn’t be dangerous. I wrapped my pillow around the back of my head, covering my ears to block out any sound. I couldn’t go back to sleep, but I remember shivering and sweating, my sheets were drenched.

I didn’t mention the sighting to anyone; I was so scared that people would either not believe me or facing having to admit for what I witnessed to be true. What if she came back? A few weeks later, my aunt called me and told me not to be scared of my grandma when she comes to visit. I hadn’t even mentioned it. I revealed what I had seen and she told me that a flower which she bought when my grandma died flowers every year on her birthday and wilts the next day.

After that, I became fascinated with spirituality and the afterlife. I began researching psychics and horoscopes. I attended shows and eventually, in my twenties, began writing my book, The Medium. The Medium follows the story of a devout atheist, Michael Walker, who has little patience for beliefs in the afterlife. His empathy becomes non-existent after he loses his son in a hit-and-run accident and his wife suddenly disappears. So when psychic medium, Jackie Wallace, knocks at his door, claiming to know the whereabouts of his wife, he is a little dubious, to say the least. However, Jackie knows information Michael hasn’t shared with anyone. He has to consider widening his beliefs to find the love of his life. But is the psychic all that she claims?

I haven’t seen my grandma since. Who knows if she was really there, or whether she saw how scared I was and decided to leave me alone. I’m ok with not knowing until I meet my maker myself.

I think most of us believe that it was, indeed, grandma visiting!