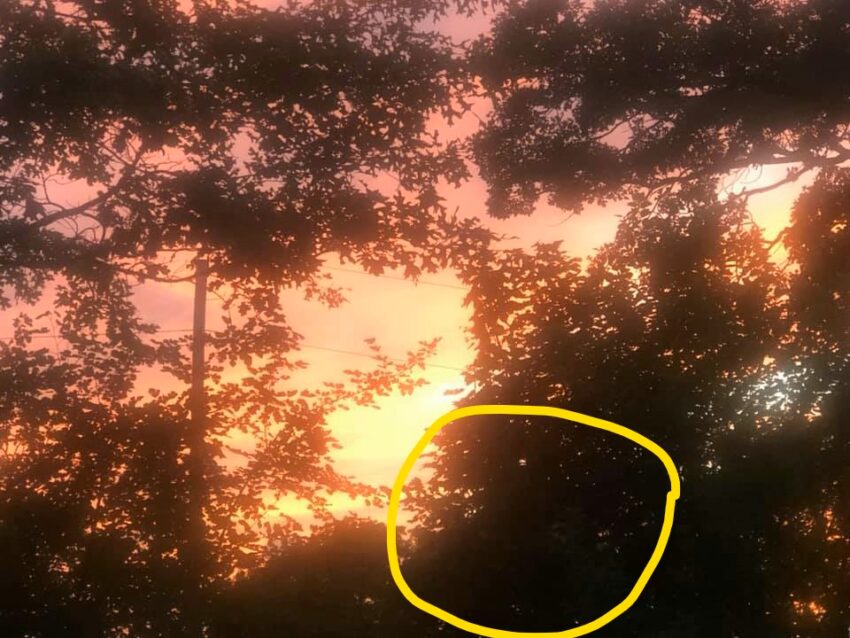 Several years ago, one of my dear Facebook friends would send me a photo and challenge me to “find the ghost.”  The photos didn’t have any obvious ghosts in them, they were usually photos of rooms or houses – like an old one-room schoolhouse – and she would ask me to see if I felt anything. She had a lot more psychic abilities than I had, but I found that when I concentrated on the photo, I would be drawn to a certain area of the room, or a window of a house, and I could feel something. So, I would send back a note telling her where I felt something, i.e., the top window on the left-hand side of the house, it feels like someone is looking out the window.  Then she would send me what she saw.  It was a really neat experiment and I think it was helping me to hone some latent psychic abilities.

So, fast-forward to a couple of weeks ago when I posted a photo of the sunset from my yard.  A little while after I posted, one of my friends wrote that if I looked right in the middle where the sunshine is, if you look closely, you will see a ghost.  So, I looked – and I really thought I saw something. Then another friend added that she saw another one, in the upper right corner of the photo.

Now, there is something called “pareidolia” which is the tendency for our brains to try and make sense of random patterns – even though the patterns may not make sense.  So, when you look at a tree trunk and see a face. Or when you look at a tile floor and think you see people – that’s your mind trying to pull together all of the pieces and saying something like, “Well, it could be this.” And it tells you it’s a face.

So – when you’re seeing things in bushes, trees, linoleum tile, piles of clothing stacked on a chair, or clothing hanging in a closet (which is why I sleep with the closet door closed) – it’s often your mind playing tricks on you.

Pareidolia can even extend to hearing – you can hear voices in random noises like air conditioners or fans. Once again, it’s just your mind taking in data and trying to make sense of it.

So, you know, when I hear noises in the house when I’m all alone, I used to blame it on the cat. (Which might be why we have three cats.) But now, I can say – oh, well, that’s just pareidolia.

However (you knew there was a however in there, didn’t you?) there have been examples of photographs and videos of spirits that have not been debunked.  In 2014, Officer Karl Romero was watching surveillance cameras when he saw what he thought was a ghost. Here’s the story from KOAT.com :

“Surveillance video recently taken at the Espanola police station is a bit freaky.

On Saturday Officer Karl Romero was keeping an eye on surveillance cameras around the station when he spotted something in the sally port. A sally port is a controlled gate or passage in a fortified place.

Romero said what he saw looked like a ghost walking across the lot, right through cages and a gate.

He reported it to his supervisors.

Detectives said there is no way in or out of the secured area without the gates opening and an alarm sounding. Police said they hear strange noises and see unexplained images in the lobby of the building, too.

Action 7 News asked Detective Solomon Romero if he thought the image was a ghost.

“I do believe in ghosts — I don’t know (what exactly was on the video), but we’ve had some unsolved murders in the area,” Romero said.

Police said as far as they know the building is not on a burial ground and no inmates have ever died at the police station.”

You should click on the link and view the video – it’s pretty cool.

I feel that when you have a trained observer, like a police officer, stating that he saw a ghost – it gets more real.

The website, Pocket-lint has an article entitled, “The most famous ghost photographs ever taken.”

Here are just a couple of the descriptions of photographs from the site. (I encourage you to go to the site and view the photos.)

In 1987, Mrs. Sayer was visiting an airfield in England with her friend. She thought it would be fun to take a photo of her sitting in the cockpit.

When the image was developed, there was a man sitting in the pilot’s seat who hadn’t been there when the photo was taken. A long-lost pilot? No one is sure.”

This image was taken by Sir Victor Goddard, of his squadron in 1919. The ghostly image behind the fourth sailor from the left, at the top, is believed to be of Freddy Jackson. Jackson died a few days before the photo was taken by walking into a moving propeller.”

Denise Russell took this photo of her grandma, who lived alone at the time, on 17 August 1997. Even though the photo had been developed, copied, and given to other family members, nobody noticed the male figure standing over her until Christmas Day 2000. The Russell family say it’s a spitting image of their grandpa who died in 1984.”

Finally, one of my favorite “catches” is from the UK’s “Most Haunted” show. LAD Bible’s website posts how these investigators, after 15 years on air, finally capture a ghost on camera.  (Once again, check out the video!) This is their description:

“The episode was filmed at Wentworth Woodhouse stable block – a site near Rotherham in South Yorkshire that was built in 1630 by Thomas Wentworth, the first Earl of Strafford.

In the episode, as ever, we got to see Yvette Fielding, Karl Beattie, and Stuart Torevell running about in the dark, trying to capture ghostly activity on camera – and the team reckons they nailed it in this episode.

At one point during filming, things took an extra creepy turn when what appeared to be the translucent figure of a man was spotted walking down the hallway.

Host Yvette Fielding described the scenes as ‘the most ground-breaking footage we have ever recorded.’

She added: “But rather than giving us the answer we were looking for, it just gave us more questions.

“Was it the presence of the spirit of a long-dead soul, a doppelganger, Stone Tape Replay, or something else we are never supposed to understand?”

Don’t ask us, Yvette! We’re not the ghost experts here.

Meanwhile, Karl Beattie, who filmed the footage, said: “We’ve never seen anything like this before and we really don’t have an explanation for what we saw, but the replay of the filming clearly shows the vision in detail. It’s a weird, weird place.”

Predictably, there was a lot of speculation surrounding the video, with some viewers claiming it’s just Stuart dressed in a hoodie.

However, Most Haunted’s resident skeptic Glen Hunt explained how the footage ‘couldn’t possibly be tampered with’, while Yvette said she was so overwhelmed by the footage that she ‘burst into tears,’ adding: “That is the best of paranormal evidence.”

While this still doesn’t confirm whether the footage is legit or not, nor does it confirm the existence of ghosts, you can’t deny that it makes for some spooky viewing.”

Spooky viewing – that’s what we’re here for, isn’t it?