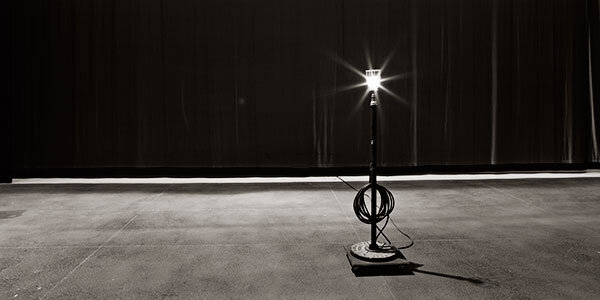 Because of the COVID19 lockdown, theaters all across the world are now closed down. But the one thing that these theaters have in common is the ghost lights that are kept lit in an otherwise completely dark theater.  Some would say that the ghost light is lit for practical purposes, so no one steps off the edge of the stage into an open orchestra pit. But those of us who understand the special relationship between ghosts and theaters understand that a ghost light is very appropriately named.

In a surrounding of rich opulence and expensive sets, a ghost light is a very modest fixture. Generally, it consists of an exposed incandescent light blub surrounded by a wire cage and mounted on a portable stand.

The superstition behind ghost lights is that it is left on when the rest of the theater is dark in order to appease the ghosts that make their home treading the infamous boards of the theater. Another superstition is that if a ghost light is not left on, bad luck will befall whatever production is being performed.

But why would a light matter to ghosts?

These aren’t your every-day run-of-the-mill ghosts. No, these are the ghosts of former actors and the light allows these spirits to recreate their time on stage. But you don’t believe that theater owners believe such superstitions as allowing the ghosts to perform in order for their own productions to be successful, do you?  Why do you think that theaters always close one day a week? It gives the more spirited actors a chance.

So, let’s talk haunted theaters and the ghosts who love them.

The New Amsterdam Theater has one of the most active ghosts on Broadway. Olive Thomas was a Ziegfeld Follies chorus girl. She was both beautiful and talented. After her run in the follies in 1915, she traveled to Hollywood and made several silent films.  She had it all – fame, talent, opportunity and then, love. She married Jack Pickford in secret. Jack was the brother of silent-film superstar, Mary Pickford. Unfortunately, for Olive, that was about all Jack had going for himself.

In 1920, on a trip to Paris – their second honeymoon, Jack informed his wife that he had contracted syphilis, and, because of his actions, she probably had it too. At the time, Jack Pickford had been using a powerful poison, mercury bichloride, to treat his infection; he would rub a solution of the medicine on his skin before going to bed.

After a night on the town, they returned to their hotel, The Hotel Ritz. The hotel staff stated they arrived between one and three a.m.  According to Jack, Olive had a headache, so she went to the bathroom to take some medicine.

She went to the bathroom and, according to Jack, swallowed a lethal dose of toxic mercury bichloride. Jack later testified that she yelled out, “Oh my God!”  Then he rushed in to find her holding the bottle of the medicine.

Murder, suicide, or a terrible mistake?

The motive was never determined.

Jack immediately called for a doctor who pumped Olive’s stomach and rushed her to a hospital, but by that time she was blind, and her vocal cords were corroded. She died five days later, just weeks before her 26th birthday.

But then, something strange started to happen back on Broadway. The stage crew at the Amsterdam Theater began telling their friends that they’d seen Olive backstage. And they were shocked to discover that Olive was dead.

But something like death didn’t stop Olive from her first love, the theater. She appeared throughout the 1920s. During the Depression, when the theater district was quiet, Olive went quiet too. But, when the Disney Corporation bought the theater in the mid-1990s, the construction crew, who were doing the massive reconstruction job, reported that a woman carrying a blue bottle kept trespassing on their off-limits work area.

Reports of Olive sightings have continued from that time until today.

A night watchman at the theatre resigned on the spot after reportedly witnessing a woman cross the stage and disappear through a solid wall.

In an article in Playbill, Dana Amendola, Vice President of Operations for Disney Theatrical Group, spoke about Olive and the Amsterdam Theater.

During previews of Alladin Amendola said a female replacement conductor, who had worked on Mary Poppins and knew about Olive, was getting ready in a dressing room. Reading from an email from the conductor, Amendola said she spoke out loud to Olive, “Well Olive, I’m back again, and I’m a little nervous. I just wanted to introduce myself again and, ask if you could please give me some good luck.” Then she mused aloud, “I wonder what the Follies girls would have thought of a female conductor?”

And just then, according to the conductor’s email, four of the round dressing room bulbs flickered on and off for a few seconds and then stopped. The bulbs were all new, having just been replaced for the new show. “It was like a wink. She was signaling that she was fine with the idea.”

Shortly after the opening of Aladdin in 2014, an audience member came up to one of the ushers during a performance and asked if she could have a booster seat for her child. “We don’t like to interrupt a show, so we waited until the intermission and came to her with a booster. But we found she already had one. When we asked where she had gotten it, she said a ‘lady at the back of the theatre’ had gestured to where they were. Now, we don’t have a woman at the back of the house who does that in the middle of a show. We checked and none of the staff had done it. So you can take that how you like, but it was kind of freaky.”

But does Amendola really believe that Olive’s ghost haunts the theater?  Well, he’s placed photographs of her at every entrance to the theatre so workers can greet her when they arrive for work each day (which is believed to keep her mischief to a minimum).