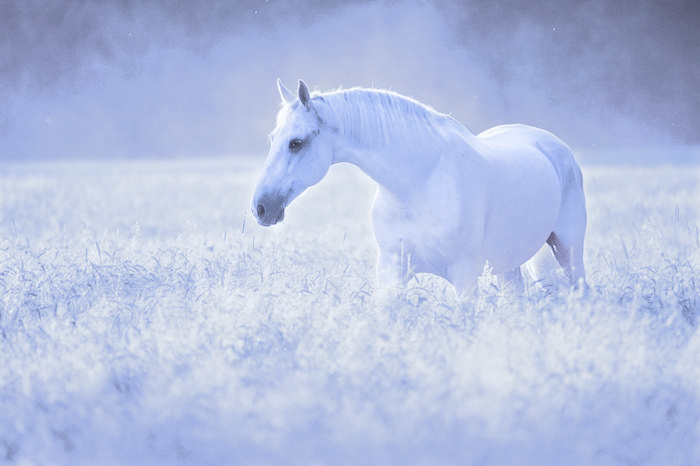 Back in the mid-seventies, Michael Martin Murphey performed a song called “Wildfire.”  It was a song about a horse that gets lost in a blizzard and its owner, a young woman, goes out searching for it. Both the woman and the horse die in the storm. (See, it’s one of those uplifting kinds of songs.) But the singer goes on to say that he knows that the ghost of the woman and the horse will be coming back for him, and they will both ride away on Wildfire.

When Murphey was interviewed about the song, he said that he dreamt the entirety of it, but he believes his dream might have been inspired by a story his grandfather told him when he was a little boy. This tale had been a Native American legend about a ghost horse.

Which leads me to this week’s Freaky Friday – Ghost Horses.

Horses are such near-mythical creatures anyway, it seems only natural that there would be stories about them coming back and racing over the pastures that they once called home. I wasn’t disappointed when I searched the Internet and found a plethora of stories about horses who have galloped to the great beyond, and back again.

Grand Central Station really seems like an odd place for a story about a ghost horse, but the specter of Maud S Trotter, one of the fastest racehorses in the world, is still seen there today. Maud S. was purchased by William Henry Vanderbilt because, well, because he was as rich as Croesus and could pretty much buy whatever he wanted. So, he bought Maud S. and had her stabled right next to Grand Central Station. The legend states that he put her there so whenever he arrived in town on the train, he could have the fastest horse in the world deliver him home.

It doesn’t sound like Maud S. had a bad life at all – she probably just wanders Grand Central Station because it’s home.

The next story is an old Canadian folktale from the Cree Tribe:

A Cree chief had a very beautiful daughter who was sought after by many brave warriors. Two different suitors were fighting for her hand in marriage. One was a Cree Chief from Lake Winnipegosis.  The other one was a Sioux Chief from Devil’s Lake.

The young maiden preferred the Cree Chief and, in order to ensure her hand in marriage, he traveled all the way down to Mexico to obtain a beautiful pure white stallion as a gift to the maiden’s father in return for his approval of their marriage.

When the father saw the amazing horse, he agreed to the marriage.

But the other suitor, the Sioux Chief, did not take rejection well. He was of the opinion that if he couldn’t have her, no one could. So, on the day of the wedding, he led a war party toward the home of the lovely maiden.

When he spotted the war-party, the young Cree Chief tossed his lovely bride on top of the white stallion and jumped upon his own horse, a gray steed, and fled toward the west.

The Sioux Chief did not give up that easily and chased after the young couple.

The new groom was well-acquainted with the plains and bluffs of the area and doubled back several times to lose the war party. When it seemed the newly married couple had outwitted the war party, the couple galloped across the plains to their new home. But, once they were away from the bluffs and on the plains, the beautiful white stallion could be seen for miles.  The war party raced after them and rained arrows upon the newlyweds.  They both died on their horses.

The Sioux Chief captured the Cree Chief’s horse, but when they tried to capture the white stallion, the horse reared back and escaped. One of the warriors claimed that he saw the spirit of the maiden enter into the horse just before it galloped away from them.

The legend states that the white horse roamed the plains for many years after the death of the young couple. No one would try to approach the horse because the spirit of the maiden dwelled within it.

Years later, the horse finally died. But the soul of the white horse continued to haunt those prairies. Eventually, the land where it roamed became known as the White Horse Plain. There are sightings of the ghost horse to this day.

A statue of the white horse was erected at St. Francois Xavier on the Trans-Canada Highway west of Winnipeg, to remind all who see it of the phantom white horse and the beautiful bride who rode it.

I love hearing old stories and legends. But I also enjoy hearing stories that people share about their own true-life ghost horse experiences.  Here are a few:

This summer my friend’s old dressage horse sadly passed away from colic. It was very sad. Several days later, I was out riding on an adjacent field. As I cantered past, I saw three horses looking at us from her field. When I got back, I said to a lady in my yard who also knows my friend, that her three horses all look well. She said “three!?” and I gasped. So, I explained what I had seen. I had completely forgotten he’d gone, and I had seen his ghost! The hairs on my neck stood right on end!

When I lost my beautiful horse 18 years ago I was sitting in the living room feeling in total despair when I felt a breeze and a nudge – I swear it was my Donna-pie telling me not to be sad, sounds daft but I had an immediate sense of relief and burst into tears of joy!!

I was riding my pony in the woods.  We kept all of the other horses fenced in the hollow so I could ride without being followed. But as I was riding along, I saw one of the old horses about 200 yards in front of me. He trotted right across my path.

I suddenly realized that the old horse had died of old age about three months earlier and she had been buried in the woods. Instead of being frightened, I thought it was lovely and made me happy to know that my horse was okay.  My pony even called to her.

A few dogs have been buried in that woods too, and people often see them running through woods. We often have someone knock on our door to tell us our dogs were loose.

There used to be two black cob horses in my old yard. One of them sadly passed away at the vet hospital in Bristol. A few months later I went to bring my horse in when I noticed a black cob off to my left. Then I realized there was another over in the far side of the field. Looked back and the first one was gone… Shadow? A trick of the light or my mind? Or had she popped in to visit? I don’t know but I said hello to her just in case!

My horse was put to sleep in June this year due to joint problems. I’d had him since he was nine months old and when he died, he was nine years old. I was devastated on the day he went, cried myself to sleep that night. When I woke in the morning, just for a second, I could smell him on my pillow, then it was gone. I’m sure he came to say goodbye to me.

I suddenly lost my beloved horse to colic in July just after his birthday and was completely heartbroken. I’ve never lost a horse before, and he meant so much to me. Also, the fact that it all happened so quickly was awful as I couldn’t get my head around it. I’d read a ‘ghost horse’ thread a few months before and was desperately hoping and praying to see him in ghost form. I looked for him everywhere, but nothing happened, so I just accepted I wouldn’t be seeing him again and tried to move on.

But recently odd things have been happening!

Twice now I have glanced out of my window and done a double-take as there has been one too many horses out there – but I realize this could be my mind playing tricks on me.

He always used to have this obsession with opening and shutting doors for me – and I absolutely loved him doing it and he always got a lot of praise! A few times this month the doors I’ve been standing next to have slammed shut – and when one bounced back open it shut again!! The stables are indoors, so there is no wind that could cause it. It’s usually when I’m doing feeds too, so he may well be hurrying me up as he was never very patient and always used to do it!

The spookiest thing was quite recent too. I always used to feed him before taking my mare out so that he was distracted and kept busy while we were gone on our hack – this was our routine and he knew it well and would neigh repeatedly at me until I brought him his bucket or hay net.

It was a couple of weeks ago, I was with my mare in the yard waiting to go, we were just waiting for our hacking buddy to finish getting ready – and I heard his neigh and my mare responded. Thought nothing of it other than “must remember to bring the bucket on the way out!” and it was literally about a 30-second delay until my heart stopped as I realized he was gone, and no longer stood in the field. His neigh was SO distinctive and there were no other horses about, so I have no doubt it was him reminding me about his breakfast. Quite comforting to know he’s still around.

And finally, this is my favorite of the group:

Not really a ghost story but……….a couple of Christmas Eve’s ago all my family had gone up to see to the horses early evening, by the time the horses were done and eating their feeds it had gotten dark, one of those lovely cold nights, no wind, no moon but millions of stars. We were sat on the railings waiting for them to finish up eating and I swear to god we all heard sleigh bells! The yard was in the middle of nowhere at the end of a long track, no near neighbors, no roads, nothing! Sent shivers down my spine!