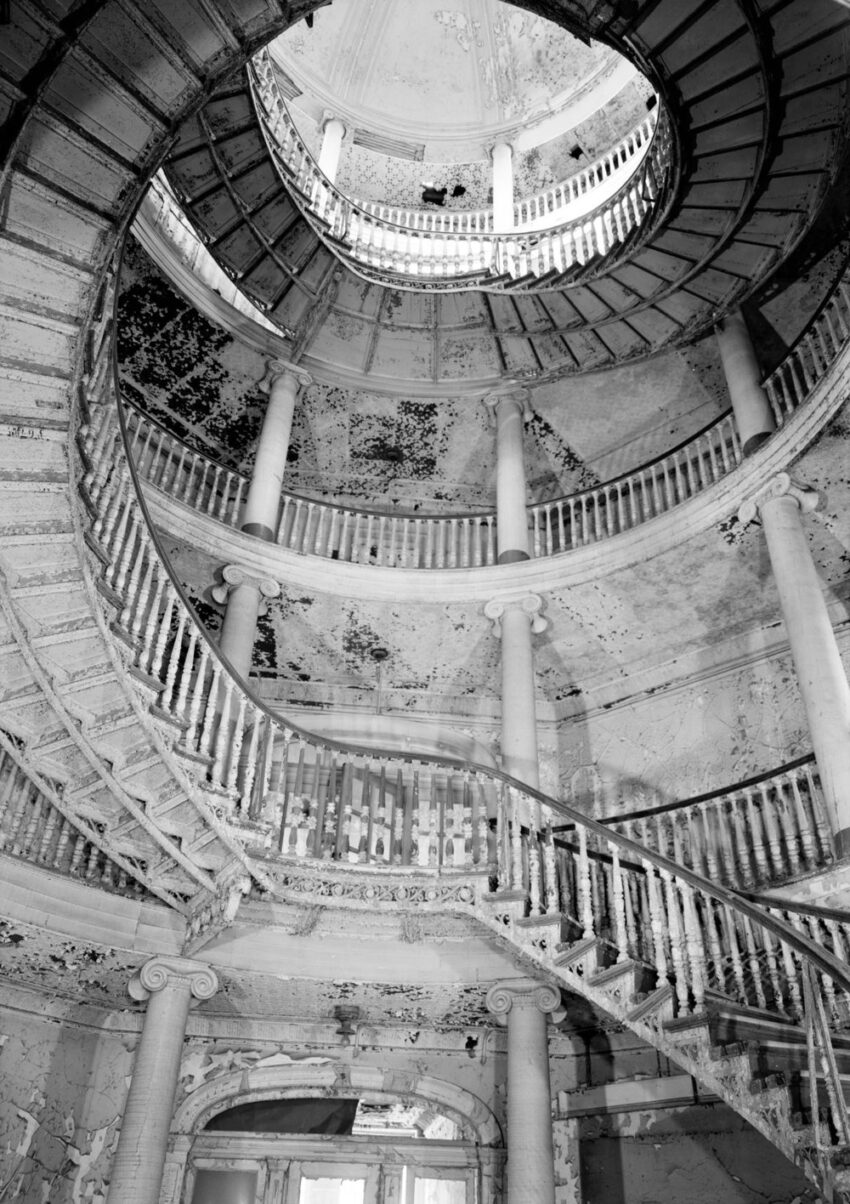 My husband and I have been binge-watching shows together.  We’ve gone through Midsummer Murders, Shetland, Vera, Expedition X, Expedition Unknown, Home Town, and Home Town Takeover. So lately we’ve been watching Off Limits with Don Wildman (he’s the Mysteries at the Museum guy.) It’s a very interesting show about all of these places inside familiar towns that are off limit to most folks.

So, last night, he was talking about the islands of New York, and he mentioned Roosevelt Island (formerly known as Blackwell Island) and the Renwick Smallpox Hospital which was built in the 1850s. In those days, before the smallpox vaccine, they isolated infected patients far away from the general population in order to stop the spread.

I figured it had to be haunted, right?

But on my way to find out more information about Renwick Hospital – I stumbled across another building on Roosevelt Island which was much more suited for a Friday the 13th Freaky Friday – The Octagon.

According to the website Ranker, the Octagon was a Lunatic Asylum that housed over 1700 patients who were severely mistreated. This is from their article, “Now known as “The Octagon” for its unique shape, the building at 888 Main St. on Roosevelt Island was the New York City Lunatic Asylum from 1841 to 1894.

Built across 15 acres of land, the number of patients in the asylum was initially a mere 800 before eventually surging to over 1,700. Among those, roughly 30-40 patients were suicidal and required more intensive therapies. Sadly, the majority of the asylum’s patients were considered “friendless and poor,” and they had no one but the state to look after them.

As more individuals were eventually admitted to the asylum, the living conditions for each patient began to suffer. For breakfast, inmates would often only be served bread and coffee, while supper consisted solely of bread, butter, and tea, with the occasional serving of beef soup thrown in the mix a few times a week.

Since its closure in 1894, visitors claimed to have heard strange noises and bumps in the night throughout the asylum’s halls. One visitor said when she visited the former asylum, it “conveyed a sense of old sorrow” upon entering.

Author Nellie Bly once wrote an exposé on the asylum in her book Ten Days in a Mad-House, saying “The insane asylum on Blackwell’s Island is a human rat-trap. It is easy to get in, but once there, it is impossible to get out.””

Smithsonian Magazine website has an article about the famous journalist who assumed the persona of “insane girl” Nellie Brown to go undercover at the notorious women’s asylum. Due in large part to Bly’s efforts, the asylum received increased funding, fired abusive staffers, hired translators to assist immigrant patients, and implemented sweeping institutional changes.

NYGHOSTS.com offers a little more insight into the building. “The Octagon was the second building – and one of the most famous still standing on the island – that was cleaved into the land. It was erected in 1834 and served as the main entrance to the New York City Mental Health Hospital aka the City’s Lunatic Asylum.

Do you know Arkham Asylum from the Batman comics? Where they house the Joker, Two-Face, Scarecrow, and all those nutty characters? Well, meet the inspiration for the place.

You can make a list of horror movie troupes devoted to mental hospitals and be certain that this place has checked off every one of them. Mistreatment of patients? Check! Mad scientist experiments? Check! Serial killers running loose? Check! Guards stepping out of bounds? Check! Shrinks summoning Lovecraft like beings in the basement? Check! If you can imagine it, then the hospital did it. Period.”

The BoweryBoysHistory.com adds to the story. “The medical profession was not terribly prepared to treat mental patients; however at the time of the asylum’s construction, attitudes were shifting somewhat. As Blackwell Island, its isolation and relative calm were seen as conducive to the treatment of the mentally ill.

Good intentions were overtaken by reality, overcrowding, and rather poor managerial decisions, such as the notion to leave part of the care of the asylum’s patients to the attention of the inmates at the neighboring penitentiary.

The asylum swiftly entered the public imagination. Charles Dickens, on his tour of America, visited the asylum and found “…everything had a lounging, listless, madhouse air, which was very painful. The moping idiot, cowering down with long disheveled hair; the gibbering maniac, with his hideous laugh and pointed finger; the vacant eye, the fierce wild face, the gloomy picking of the hands and lips, and munching of the nails: there they were all, without disguise, in naked ugliness and horror.”

Part of the asylum was lost in an inferno in 1858. One can only imagine the pandemonium of evacuating mental patients without the modern medications and restraints of today. And the sounds of the blaze mixed with the shouts and howling of the patients.”

Today, the asylum has actually been converted into expensive, luxury apartments. But just because you refurbish it, doesn’t mean the former tenants go away.  This experience is from a Reddit user – Jaded Felicity “When I was a sophomore in college, I lived in an apartment in NYC on Roosevelt Island which is nestled between Manhattan and Queens. The island has a dark history and at one point there were insane asylums and a smallpox hospital. (It’s actually pretty fascinating if you want to Wikipedia it.) But with all of that suffering, the island seems to still carry that burden.

So our apartment was laid out in sort of an L shape the living room/dining room faced part of the hallway, there was a bathroom at the end of the hall that was small and led to the two bedrooms, one of which had a balcony off of it. I’m not going to lie, we had a killer view and for a dorm, we felt like we were living pretty large.

But not long after we moved in, my 3 roommates and I all began to all experience some things. It started with the feeling like we were being watched all the time. I remember specifically I was home alone and working on a mural (art student) and I began to feel very uneasy like someone was right behind me the whole time watching me. This went on for about an hour and I just couldn’t shake this feeling but did my best to just roll with it, but I’ll admit it, I was scared. I was relieved when my roommates got home.

As the semester continued my roommate and I had a huge project due and in order to accommodate all the space we needed to do it, we took turns working in the living room. I worked on my project first and then headed to bed as my roommate worked on hers. I was laying in my bed reading with my back to the door when I saw a shadow come up on my book and felt like someone was behind me. Thinking it was my roommate, I turned to see what she wanted and she wasn’t there. I shrugged it off and kept reading. The shadow once again crept up on my book, I moved my blankets, my head, and the shadow didn’t move. At this point, I was scared but felt ridiculous if I mentioned it, so I pulled the covers over my head and just went to sleep.

Fast forward to Halloween. We had a party and a bunch of friends were over, as the night wore on we started talking about ghosts and spooky stuff, and low and behold it comes up about how everyone thinks our place is a little spooky. My roommate starts to tell a story about how one night we both had a project due and we took turns… I’m like, where is she going with this?… she says she was working on her project and she saw someone out of the corner of her eye walking in the hallway, so she gets up thinking it’s me and it turns out I’m asleep. She goes back to do her project and she feels someone come up on her, all the hairs on the back of her neck stand up, and once again no one is there. Now at this point, I had never mentioned to her what happened to me that SAME NIGHT! I told her my story and we both were in shock.

The more we talk, a few people mentioned feeling like they were going to get pushed off the balcony every time they went out there. And then it comes out that two of our friends had the exact same dream when they slept over, they were paralyzed and began floating and then began to uncontrollably spin. At this point, I’m convinced something is happening.

Sometime later, I began to start seeing a shadow figure often out of the corner of my eye in the hallway. It was dark with no features and I only ever saw it out of the corner of my eye as it quickly darted when I would look full on. I convinced myself it was just my eyes until my friend was over. We were sitting at the table talking when I got distracted for a second because I saw it. So I took a pause in the conversation and when I looked at my friend she said, “I saw it.” I said, “saw what?” And she replied, “that black thing in the hallway.” I had never told her I saw it before so I felt totally vindicated.

The pinnacle of my experiences happened when it was winter break, my roommates had left to go home and I was the last one there. Not wanting to be alone I called a friend to stay. We were talking about going out so I went into the bathroom to brush my teeth. The door was open because we were still talking. When there was a pause in our conversation, I heard a voice plain as day whisper my name loudly and directly into my ear. At this point I visibly freaked out, I confirmed with my friend that she said nothing and we decided to leave the apartment for a while.

During winter break I had contacted a few paranormal teams who wanted to check it out after I relayed my story. When we got back from break, I told my roommates and they were not at all interested and acted like I was nuts even though we all had had experiences. I regret to this day not just letting them come. So, I went to a church, got holy water, sprinkled my apartment, and said aloud, “This is my apartment and you’re scaring me, that’s not ok and you need to go.” After that, I didn’t feel much of a presence, but maybe I just believed what I did worked, and learned to ignore it? I’ll never know.”

Sure it worked. You just keep on believing that.