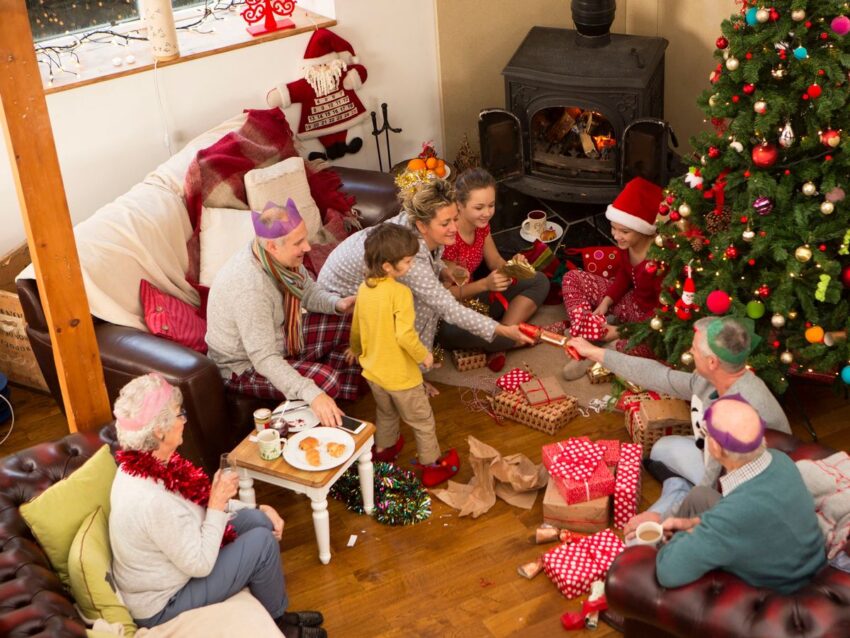 The holidays are a wonderful time to get together with family members and friends you haven’t seen for a while.  And in these stories, you’ll discover that something like being dead doesn’t always stop someone from visiting during the holidays.

These next stories were taken from Reddit and are true stories. I hope you enjoy them:

My grandpa came to see me for Christmas

This is a hard story to tell because it was my best and worst experience dealing with the supernatural. It’s the best because it proves not all ghost stories are about vengeful spirits and dark shadows that go bump in the night. It’s the worst because …. just read for yourselves.

It was the week before the first Christmas after my grandpa died, and I had stayed the night at my grandma’s after we’d gone Christmas shopping the day before. My grandma was still taking it hard, and I’d been trying to help cheer her up.

We had just gone out to do more shopping for gifts, boxes, and paper the usual wrapping stuff. Then we went to McDonald’s to grab some take-out for lunch. When we got back, we ate lunch and watched Christmas movies in the living room till my mom got there to pick me up.

I guess all that shopping wore her out cause halfway through the movie we were watching my grandma fell asleep. As I was sitting there, I started to think about my grandpa. We were always really close, and his passing really hit me hard, but I was trying to not show it around my grandma.

I was missing him a lot, and I didn’t actually want to stay over at my grandma’s house as much as I used to because being there brought up all the memories of him. It just made me miss him more. I never even went into his bedroom anymore because it was just too sad.

While my grandma was sleeping, I tried to pay attention to the movie, but all I could think about was my grandpa, all the fun stuff we did for Christmas, and how I just wanted to see him again. Then all of a sudden the room started to feel cold.

At first, I thought it was draft but, then everything felt heavy, and it got quite real quiet. The clock stopped ticking, no car noises, no nothing. It was like the whole world had just stopped. It looked like all the color had started to fade away until everything just turned gray. Then my whole body felt like pin prickles, and it felt like someone was watching me.

As I looked up, I almost screamed in shock. There in the doorway that led into the hall was my grandpa. He was just standing there smiling at me wearing his favorite cream color, brown pinstripe, shirtsleeve button-up shirt, blue jeans, brown belt, white socks, brown loafers, and brown glasses. The only thing different was a kind of glow around him.

I sat there frozen for what seemed like an hour, then I started to stand up.

I don’t know why maybe to hug him or maybe just touch him to see if actually there. I don’t know, but the second I got to my feet he was gone, and the world went back to normal with all the sounds and color back, like someone had just hit the unpause button.

I just stood there for a second then realized I was crying and went to get a tissue.

An hour later my mom came and got me. She and my grandma talked for a bit, but I stayed quiet, debating on whether or not to tell them what happened. I decided not to say anything to my grandma just yet but told my mom everything on the car ride home.

My mom was so shocked she had to pull the car over. She asked me like million questions, mostly if I was positive about what I saw. Each time I told her yes and then described the whole thing over and over again. I then started to cry, and she hugged me to calm me down even though she was crying too.

When we calmed down, she told me it was ok, but to never tell my grandma about what I saw that day. After that, I still visited my grandma but never by myself, and I didn’t stay overnight again.

The weirdest part of all of that was that even though I was freaking out at what I saw, part of me wanted to see him again.

My great-grandfather had an RC train set he put together in my great-grandma’s basement. He was into scale modeling, as was I at a young age. I was crazy about all that stuff. I never met him, but from what the family tells me, he was a very sweet, kind person. He never had much money, so he used what he could on the train layout.

Flash forward about fifteen years after he died, I come along.

Every Christmas my aunt would take me down to the set to run it, cause I loved working the controls and seeing all the old buildings light up. One Christmas, while we were down there something really freaky happened.

There were these Christmas lights that ran around the mountains on the layout. My great-grandma insisted they hadn’t been on since great-grandfather died. We’ve tried to turn them on before, but they never did.

I was looking at the train go by, then the lights just came on. Completely random. I was alone in the basement, and I just sat there looking at them. I tried to find the cord that plugged them in, they weren’t plugged in. By the time I looked at them again, they were dark again.

I packed everything up and turned it all off. As I left, I looked back at the controller and saw a torso of a man, no face or arms, just a white T-shirt with a pack of smokes rolled up in his sleeve, just like the photos of my great-grandfather.

I went upstairs to tell everyone, but no one believed me. To this day, I think my great-grandfather was happy he got to spend Christmas Eve with me in his favorite spot in the whole world.

Saw my father while home for Christmas.

My dad died of pancreatic cancer about two years ago.

I was coming out of the bathroom of my mom’s house (where I grew up, and also where he died). Saw a figure walking towards me, around the corner, and into my parents’ bedroom. Happened fast. I was baffled, assumed it had to have been my husband and my mind playing tricks on me, as both my father and my husband are about the same size and both fond of the “jeans and a polo” look.

I stuck my head into my parents’ dark bedroom and said, “Honey?”

He answered back “Yeah?” from the living room.

Haven’t told anyone yet. Didn’t want to potentially upset my mother.

Christmas – a night for miracles, where anything can happen.

2 thoughts on “Family for Christmas”