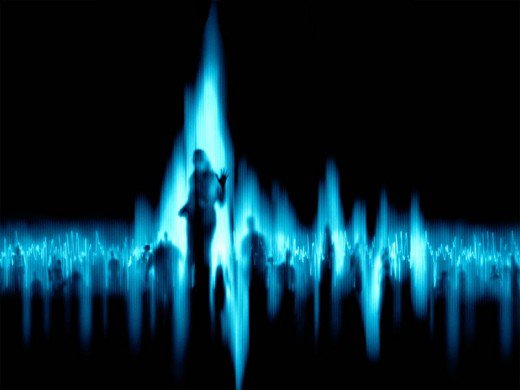 Over the holiday, my husband and I got to travel to see my daughter, son-in-law and two adorable grandchildren.  The drive to their house was about fifteen hours one way, so we got to catch up on one of our favorite podcasts, Astonishing Legends. Actually, I think that we plan long drives just for the excuse to catch up on these podcasts.  The one we listened to was VERY long and VERY interesting. It was about a haunted house in Atchison, Kansas known as the Sallie House.

The Astonishing Legends hosts, Scott and Forrest, do a great job of giving you a lot of historical information and background about any of the things they investigate, and the Sallie House was no exception. But the thing that interested me the most, and the thing they spent most of the podcast focused on, was an EVP that Scott got when he left a recorder running in the empty nursery on the second floor of the house.

Now, I might be getting a little ahead of myself here. Let me take a moment and explain what an EVP is. According to Wikipedia, electronic voice phenomena (EVP) are sounds found on electronic recordings that are interpreted as spirit voices that have been either unintentionally recorded or intentionally requested and recorded. Often the messages are found in recordings with static or other background noise.

So, Scott left a recorder upstairs, asked anyone who might be interested to leave a message and then came back five minutes later.  He discovered an EVP that shook him to his core. He left the house immediately and then, in the subsequent weeks, sent that recording (and recorder) to experts all over the country to have them debunk it.  They couldn’t. And they couldn’t recreate it.

If you find this intriguing, I HIGHLY recommend that you listen to the entire podcast. It is worth the time.

After we listened to about thirteen hours of the Sallie House investigation, I knew I wanted to write about them for Freaky Friday.  So, of course, I had to go to one of my favorite goldmines of paranormal occurrences, Reddit. And wait until you see what I found!

So, this will be a lot more fun if you click on the links and listen for yourself. And, I promise, I’ll wait for you and then give you more!

Creepy EVP before Hurricane Michael. This was a post by boroboymatt: So, my family has vacationed at the same condos for years and we have had some weird experiences that make us think it is haunted. I can go into them if someone is interested, but I’ve never caught an EVP until this trip, which given what I believe it to be saying and the fact that we were evacuated 2 days later for Hurricane Michael, makes it super creepy. Seriously have goosebumps. Listen with earbuds. The EVP is at 7 seconds. After my sis says look at the ocean, isn’t it amazing, I hear “it’s gonna rise up”. Let me know if you hear something different.

This one was posted by belledejour43: We were walking around this creepy cemetery on July 22, 2017, looking for writer John Kennedy Toole (“A Confederacy of Dunces”) final resting place. We finally located him. I took a few pictures of his grave and on a whim decided to use my iPhone Voice Memos app to attempt an EVP (my first attempt ever by the way). After recording for 30 seconds, we left the cemetery and went to eat and then to our hotel. Hours later I decided to listen to the recording. After I ask: “Anything you want to share?” I heard a noise or sigh that sounds like that of a child. It gave me goosebumps. So, I decided to research this cemetery more. And I found that there have been reports of the following paranormal activities: “A often told local tale tells of a pack of ghost dogs are said to roam the cemetery. Often, they say they hear a baby crying. And the ghost of a young girl is said to be seen perring (sic) from behind tombs always following people around. Many EVP’s happen here. And ghostly sounds are heard.”

When I listened, I thought I heard a little girl say, “Hello.” What do you think?

This one was posted by NKG13 and I can hear the voice very clearly.  This is what she says: So, I was going through old videos of my kids (I work nights and got bored). At 00:15 seconds I hear a distinct voice that is not mine or my husbands. I got chills. Have listened to it 100 times…and I am confident it’s not me, my husband or the TV. I had other videos with his voice and the TV on where I was in the exact same locations and the sounds are just so different.

She hears a man say, “Leave him alone.”  I listened and heard the same thing. Actually, when I first listened, I thought that was someone in the room speaking. It’s amazing that you can pick up EVPs on regular video equipment too.

This one is pretty cool too. It was posted by ControlHope: My now ex-girlfriend and I were staying at the Lemp Mansion in St. Louis, MO and we were staying in the Elsa Lemp suite on the third floor; purported to be one of the most haunted in the Mansion. We had been there maybe an hour before I decided to start my voice recorder. It wasn’t till the next day, after reviewing the recording, that I heard the girl giggling. My ex and I believe that because we had the bathroom door closed (and the stories say the spirits didn’t like that door closed) that a joke was played on us; hence the three knocks on the door. What you don’t hear in the audio is me opening the door after hearing the knocking. None of the lights were on in the hallway next to our room nor any lights on in the stairwell next to room. There were no staff coming up or going down the stairs.

I listened to the recording and at about the 44 second mark you can hear three distinct knocks on the door. Then at about 55 or 56 you can hear a little girl giggling.

So, did they catch spirits on their devices or were their ears just playing tricks on them?

You be the judge. And, while you’re at it, why don’t you play back some of those old family videos you recorded years ago. Listen carefully, and maybe you can hear some messages from beyond the grave!