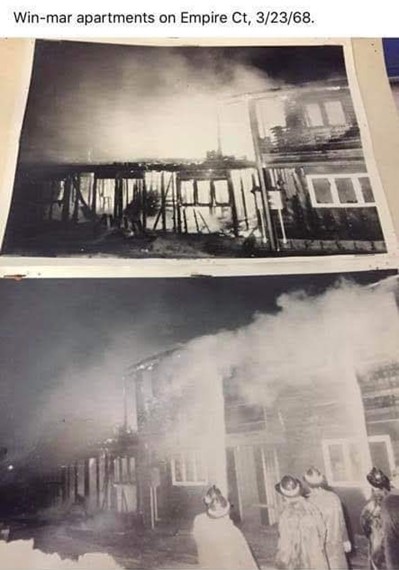 Late last year, a local resident – let’s just call her TLP – sent me an email chock-full of paranormal experiences she’d had. Initially, I thought I would be able to use it in my podcast, but I haven’t really podcasted lately, so she gave me permission to share it with you through Freaky Friday. Warning – these experiences put the “freaky” in Freaky Friday!!!

When my grandmother, mom, and I lived at Empire Ct. Apartments back in and around 1977, didn’t know at the time that this particular apartment section had burnt down years before.  The one-bedroom that was my mother’s was fairly large, she had her bed against the west wall and the long dresser right next to it.  Her alarm clock was where she just had to reach up and shut it off.

Now mind you, her dresser was dusty so if there was anything out of place you would know because of fingerprints.

One morning she woke up to her alarm, but it was at the far end of the dresser.  No fingerprints showing it was moved, dust was not disturbed.

We had gotten a puppy when we lived there a few months before moving out.  Charlie, my puppy, would not set foot in that room.  He would stand outside the door and just whine.

I was dating a guy who lived on Stephenson St. where the Midwest Bank now stands.  There was a long gravel drive and then the house set back.  As soon as you pulled into the driveway off Stephenson, no matter who it was or the vehicle, the radio would go dead silent. You could try changing the station but still nothing.

When you got close to the old brick house there was a balcony off the main bedroom with French doors.  You always had the feeling someone was watching you.

One Friday night Ruben and I were sitting in the living room talking and having a beer.  There are no other houses that close by, but it sounded like there was a party going on outside the house.  We went to look and see if some people had shown up but nothing, just the two of us.

We went back into the house and sat down on the couch.  About an hour later we smelled gas, like from a stove.  We went to the kitchen and all four burners were turned on, but the pilot flames were out.  Ruben lit the pilot lights, and we went back into the living room.  Both of our beers were now on the fireplace mantel and Ruben’s shotgun that was hanging above the fireplace was now sitting on the coffee table in front of the couch.

One night I stayed the night.  His room was the master bedroom.  There was the main door, then there was another door that went right into another bedroom.  He always kept that door closed and a living room chair in front of the door.  That little extra bedroom is where the French doors and balcony were.  The one and only time I stayed there, Ruben’s dog, a sheltie, always slept in the bedroom with us and he would bark at any little noise he heard.  Well, the next morning that door that was always shut was wide open, the chair was moved out away from it, and the dog never barked.

Back in the late 1990s, I worked for Stewart & Associates as a security guard at Honeywell (Micro Switch).  I worked the 3rd shift at Plant 2 most of the time, which is located on Spring St. In Freeport.  There were always two guards working at the time.

Micro Switch’s main entrance used to be on Spring St. until they did remodeling, then the main entrance was moved to Jackson St.  Back in the late 1970s, a 3rd shift guard was shot, the gunman used a shotgun.  (To this day I cannot find anything on the internet about it.  My mom, grandma, uncle, and ex-mother-in-law worked at that plant on 1st shift.  They remember it happening, but I still can’t find anything on it.)

The other guard and I were required to do rounds, even on weekends when no one was working.  Every hour I would do rounds, and the other guard stayed at a desk at door in case any workers would come and do extra work on their time off.  We had to do each floor and there were several checkpoints on each floor.

Well on the 3rd floor in one of the areas where the checkpoint was you had to pass by an area that was caged off.  There were expensive parts and things kept in the caged area except for on 1st shift then the cage was left open.  While doing rounds at night several times it happened that I would get chills, my hair on the back of my neck would stick up.  On different occasions, I had seen a dark shadow fly past me, always on my left side. The shadow would look like it was coming up from the floor and it always flew towards the ceiling.   It wasn’t a full-body black shadow, it was always like a half-body shadow.

We always used the stairs, never an elevator during the 3rd shift.  Several times I would find a can of soda on the middle of the stairs in different stairwells at different times, and it was always a brand that wasn’t sold in the vending machines.  The other Plant, Plant 1 that was over on Stephenson St. across the bridge on the East side of town was said to be haunted, but I never experienced anything the few times I had worked there.

When I lived in Freeport on Walnut St. My husband at the time was building a deck in the backyard off of the back porch.  First, we had to clean out from under the back porch. We used a rake and shovels.

When I contacted the Police to find out what the bones were, Bill and I were told to quit digging under the porch!  No explanation given to us.

In 1998 and into 1999 my stepfather and I were remodeling the house he bought in Forreston to rent out.   The house was had been owned by an elderly man.  His wife had passed away several years before he did.  Since he was older, he had installed a door at top of the stairs, and he only used the downstairs.

Eventually, the family had to put the elderly man into a nursing home.

Well, every day I would come down from Freeport to help Butch do remodeling.

There were three bedrooms upstairs.  In one of the bedrooms, we ended up taking two walls down and make it into a game room.

This one particular night I stayed at the house working.  I was up in the room where we had taken the two walls out.  I was on a stepstool scrapping wallpaper off the wall and had the radio blaring.   All of a sudden, I got chills running down my spine.  I got really creeped out, so I shut everything down, locked up the house, and went over to my mom’s and Butch’s house.

I told them what happened, called it a night, and went home.  A few days later when I went back to work on the house, Butch informed me that the night that happened to me, Bob, the old man, had passed away at the nursing home.

The house in Forreston that I helped remodel is where I now live.   About a year ago my daughter was down visiting me.  In the downstairs of this house, there is a large kitchen, a dining room, the living room, and a small room off the living room.  I use it as a computer room.

My daughter, Chrissy, was using the bathroom at the time, my grandson was at school in Freeport.   She had the door going to the kitchen shut and locked.  The door to the computer room she left open.  I was sitting at my desk and I could still talk to Chrissy because she had that door open.

While I was sitting there, all of the sudden my hair on my arms and neck stood up, and I got that same chill as I’ve felt many times before.  I was facing toward the monitor and suddenly a black shadow flew on my right side up towards the ceiling.  Again, it was only half of a body size.

I jumped and screamed because it startled me.  I asked Chrissy if she saw anything she said no, she wasn’t paying attention. But she was wondered what made me scream and I told her.

On different occasions, dumb stuff happens and I just never give it a thought since it happens so frequently to me.  My cat, Toby, will sit in the same spot that the weird stuff happens, and he will just sit and stare up at the corner of the living room. It’s nothing for him to sit there for 20-30 minutes.  He just moves his head as if he is following something.  My grandson Braxton has sat in different parts of this house.  Then you hear him caring on a full conversation as if he sees someone there and he acts like it’s normal to just sit and carry on a conversation as he is looking up toward the ceiling.

I understand kids go through phases where they pretend that they’re talking to someone, but he will carry on full conversations.

2 thoughts on “Email from a Local Resident”