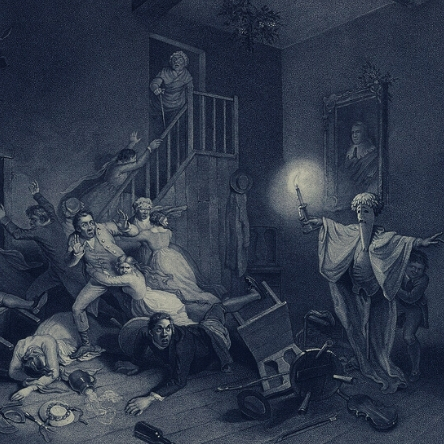 Ghost stories and December are a little bit like pumpkin pie and whipped cream, you really want to enjoy both of them together.  But what is it that makes December (Christmastime) such a wonderful time for telling scary stories about paranormal encounters?

I found a lovely blog from The Carterhaugh School of Folklore and the Fantastic entitled “Ten Spooky Ghost Stories for Christmastime” where they talk about the tradition of telling ghost stories in Victorian England and then share some pretty scary fictional choices.  This is from their site, “To understand why Christmas was traditionally a time for ghost stories you have to look at the various connections the celebration of Christmas has to the Celtic celebration of Yule, the winter solstice and the darkest night of the year. While, like Halloween and Samhain, these connections are not perfect (and Yule certainly didn’t “turn into” Christmas), there are still significant borrowings that should be considered. What’s most important here, however, is that the winter solstice is yet another liminal time, a time of the year when the veil between worlds is thin – this makes it, therefore, a perfect time for ghosts. This belief, coupled with the fact that it simply gets darker earlier, makes the end of December the prime (and traditional) haunted storytelling time.”

So, I thought it would be fun to share some chilling ghost stories throughout this month. If you have a story you would like to share, please let me know or email me at [email protected].  I would LOVE to share your story too!

Okay, here we go, the first story of the season.

Doppelgangers are malevolent twins or paranormal entities that either take your shape in front of people you know or take the shape of someone you know and pretend to be them.  The idea of a doppelganger always sends a chill down my spine.  I’m hoping these true stories does the same to you. These are from a discussion on Jim Harold’s Virtual Campfire Stories on Facebook:

“My husband had a super creepy experience with this when he was a kid:

It was early morning, and he was still asleep. That is, until he was woke up by being tickled. He says he remembers feeling really annoyed because he wanted to keep sleeping, but he sat up and put on his glasses and saw his mom now by the doorway of his bedroom. He says he called out something like “What are you doing? Why did you come in here so early?” Then his “mom” sort of hunched over, positioned her hands like someone pretending to be a T-Rex, and smiled in a way that he said seemed real creepy then sort of tip-toed backwards out his bedroom into the hallway, never looking away from him. So, he got out of bed and followed her because he wanted answers as to why she woke him up. But when he gets to his parents’ room he said his mom was all tucked in under the covers deep asleep. At this point, he said he was slightly angry and just confused so he yells, “why did you come in my room and tickle me!” This startled his mom awake and she’s real confused and asks him to repeat what he yelled at her. He does, but his mom insists she had not been out of bed yet that morning and tells him the usual “it must have been a dream” thing. But he insists until this day that he felt hands on him waking him up and clearly seeing “his mom” go from his bedroom doorway into the hall.”

“Happened to me. I was 13. I was sitting up reading a book. Mom came and stood in the doorway but did not enter the room. I asked, What’s up? She started to give mundane answers, but I started getting a cold sick feeling in my belly. I then looked straight at her and said, “You are not my mother!” She laughed some weird laugh, scaring the living hell outta me. I screamed and she faded. She had been sound asleep. There was nooooo way she could have gotten back in bed without me hearing her running or her creaky bed. Worst. Memory. Ever.”

“I’m 45 now, but I remember a story of when I was 12 or 13. It was the 1st time my mom was to sleep all night alone in the house, because usually, one of the 5 of us would be there. My much older brothers were gone off with their young adult lives, I went to a sleepover down the road with friends, & Dad was doing an unusual all-night work thing, where they had to repair broken down equipment at some big factory so they could resume production & it was his job to see to it that it got done, but it wasn’t a fun thing at all – really awful & exhausting hours. Anyway, Mom felt, heard, & saw him come home in the wee hours of the night, turn on the kitchen light, sit down on his side of the bed & felt the bed go down, heard him take off his steel toed work boots, & lay down. Her back was to him as she was facing the other wall, laying on her right side. Then she turned around & he wasn’t there. He was super exhausted during these types of jobs. I think they had to go after already having worked a regular full day. Maybe his spirit wanted to go home & be in bed so bad – it just went. That’s all I know of. My family isn’t open about talking about things like this.”

“I was 9 months pregnant and fell asleep in my parents’ room. I could see into the bathroom (2 door in, 1 in hallway 1 in their room) I awoke to my mom opening their door and watched her hang her towel up, and she was wearing her Minnie mouse onesie pj’s (she loved those ugly things) Her hair was wet, and she didn’t look at me, so I assumed she didn’t even know I was laying in their bed. I knew when she was done with her shower it meant she was heading to bed. I did find it weird it was still light out; she usually waits until dark to crash out. Anyways, I rolled my huge belly and myself, out of the waterbed (that was hard to do) walked downstairs and there was my mom, sitting in her chair, watching TV. Fully clothed in the outfit she had on for the day, shoes on and hair dry. I stood there looking at her in shock before asking a question I already knew the answer to…. “weren’t you just upstairs getting out of the shower??” Of course, she said no… then I told her, so she then didn’t want to go to bed at all that night.”

I don’t know about you – but I’m sleeping with the Christmas lights on tonight.