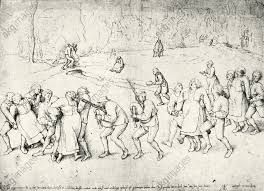 In Illinois, we have been ordered to stay-at-home, not that it’s unusual for me, because I work at home. But it’s unusual because I have company now, there are three other adults who are sharing my normally isolated space. As I look through Facebook, I’m finding quite a few reports of people who suddenly are spending quality time – LOTS of quality time – with all of the members of their family.  And I think we are all finding that, even though we love our family members, this much closeness isn’t all it’s cracked up to be. Some poor moms are not only stuck at home with all of their children, but they’re also responsible for supervising homeschooling. Many have mentioned that their sanity is at risk. That’s not as far-fetched as you might think.

Perhaps that’s what happened to the good citizens of Aachen, Germany. A mere six hundred and forty-six years ago, the folks who lived there began to pour out of their homes and onto the narrow streets. Once there, they began to writhe and whirl uncontrollably.

This was the first known occurrence of the dancing plague or choreomania, and it would sweep across Europe in the next several years.

Experts still don’t know what caused the phenomena, like a scene from “Hocus Pocus” the people in the community would dance themselves to exhaustion. The outbreak in Aachen was called St. John’s Dance and the description from the book “The Black Death and the Dancing Mania” published in 1888 describes it like this: “They formed circles hand in hand, and appearing to have lost all control over their senses, continued dancing, regardless of the bystanders, for hours together, in wild delirium, until at length they fell to the ground in a state of exhaustion. They then complained of extreme oppression, and groaned as if in the agonies of death, until they were swathed in cloths bound tightly round their waists, upon which they again recovered, and remained free from complaint until the next attack.”

The disease spread up and down the Rhine River into the Netherlands and Belgium.  In other places, the mania began to be called St. Vitus’ Dance.

St. Vitus was actually a very good, but unfortunate man. He was credited with curing the Roman Emperor Diocletian’s son of epilepsy – good, right?  But he decided not to credit the cure to the pagan gods, so he was beheaded for sorcery – bad! However, he got a dance craze named after him because the jerking movements of Dancing Mania were very similar to someone having an epileptic fit, so the dance was named after him.

St. Vitus Dance was later distinguished from St. John’s Dance or the Dancing Mania. St. Vitus dance was clarified as Sydenham chorea which is a disorder that struck children and caused involuntary tremors in the arms, legs, and face. But those tremors were nothing like the dancing that went on in Aachen or the other cities.

Some modern interpretations believe that the dancing could have been caused by a toxin that was introduced to the community through a fungus that grew on rye. Because of the psychoactive chemicals produced by the fungus, ergot poisoning, or ergotism, can actually bring on hallucinations, spasms, and even delusions.  See, just blame it on the Rueben!

Of course, neither Sydenham chorea or ergotism has been blamed for the Dancing Plague of 1518. This happened in Strasbourg, Alsace, which is now modern-day France. Frau Troffea walked out of her home, went to the village square, and began to dance.  Within a month, four hundred people from the village had joined her. To make it worse, the well-meaning village elders (bring in the politicians) tried to make it better by hiring professional musicians to play alongside them and spur them on. One source states that about fifteen people a day died from the dancing, but the city of Strasbourg has no record of any deaths or if there were even fatalities. No one really knows what caused the dancing, but one of the main explanations is that it was mass hysteria caused by extreme psychological distress. (Rumor has it that they were all moms who were forced to home school their children!)

So, during this time of lockdowns and stay-at-homes, give yourself and your kids a break. Measuring flour, sugar, and butter is math – and cookies taste much better than any arithmetic lesson I’ve ever heard. Planting seeds or taking a walk around the back yard is biology or ecology. Reading a ghost story is reading – and entertaining. Writing ghost stories is language arts and creativity. Do the best you can, don’t beat yourself up. Enjoy your kids, they’re stressed too! Have fun. Laugh – a lot! And, if worse comes to worst, do their reading by putting the television on and muting it, so they can read the subtitles.

I’m working with the producer of Terri Reid’s Attic to offer your families a little break and a little fun. In the near future, we’ll be offering family-friendly ghost stories from my Tales Around the Jack O’Lantern through our podcast.  I’ll be narrating them, and they will, of course, be free for your listening enjoyment.  We’ll be announcing their arrival sometime next week – so check out the Terri Reid’s Attic Facebook page if you haven’t done so already.

In the meantime, stay safe and healthy.