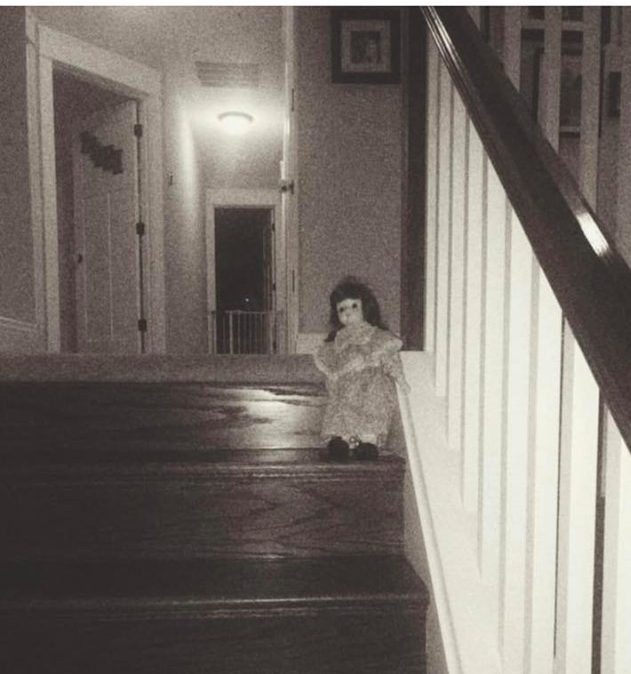 Today’s Freaky Friday blog is in response to a Facebook post by Mickey Claus called “A Doll in the Hall.”  It was the picture above with this copy, “Hey Parents, Instead of an Elf on the Shelf in December, let’s do “A Doll in the Hall” in October. You take a creepy porcelain doll that your kids already believe is haunted and keep secretly moving it around the house. For an extra festive TOUCH, put the doll right in bed with one of the kids too!”

I thought it was hysterical – especially because we had our own version of this at my house many years ago. When my daughters were in their early teens, they had a sleep-over and while they were downstairs eating pizza, their older brothers moved their porcelain dolls from the shelves in the bedroom to their bed.  So, the girls came back from pizza to have several dolls staring at them from the pillows in a darkened bedroom.  The girls slept downstairs that night.

What is it about dolls?

I remember a Dead Files episode where a woman was an obsessive collector of dolls and Amy blamed most of the paranormal activity on dolls. Amy’s theory was that spirits could inhabit the hollow insides of the dolls and make a home there.  That’s a cheery thought, right?

Then, there was Josh Gate’s “Destination Truth” where he explores the Island of the Dolls.  Now, just to clear up any misconception, this is not like the sixties book and movie, “Valley of the Dolls” at all. Just to emphasize my point, let me share the description, “Josh journeys to the ancient canals of Mexico City to explore an island filled with thousands of decrepit dolls that locals say come to life.”

I watched that episode and Josh and I both jumped when one of the dolls turned and looked at him. Creepy!!!

The website “Monsters and Critics” shares a little more about the episode: “The island, known locally as Isla de las Muñecas, lies south of Mexico City and is one of the many artificial islands built on the lake. These floating gardens have been in use for over 1000 years and were originally created to increase crop production, with so many created that parts of the lake are now more like canals.

One of the islands was owned by a man called Don Julián Santana Barrera, who was by all accounts a bit of a loner. The story goes that one day he found the body of a young girl floating in the water, along with her doll. As a mark of respect for the dead child, he hung the doll on a tree, but soon after he began reporting paranormal activity. Voices calling him and anguished wails caused Barrera to collect as many dolls as he could, in order to appease what he thought was the restless spirit of the girl. The result is one of the creepiest islands around and one that few people forget once they have seen it…”

The realistic, eerie dolls started popping in strange locations throughout Jefferson County, Missouri, and the town of Festus last week. Some of them were without a face and others even headless.

“At first, I didn’t realize it was a doll,” a local resident told KSDK. “I was like, ‘What is that?’ It looked like it was crying and in time out. I was like, ‘That’s kind of creepy now.’”

One of the dolls was seen laying on a rock without a head, another was found hanging from a light pole and another looked like it was crying against a pole. Police say one resident called 911 out of concern that one of the dolls was a child on the side of the road.

“They’re getting pretty good where they are putting these; putting them where they are going to be seen. This one was at a major intersection,” Festus Chief of Police Tim Lewis told fox2now regarding one doll on a light pole. Many of the dolls look fairly similar but are dressed in different color dresses.

Lewis says that police believe it’s the work of a prankster, but they still haven’t identified a suspect.

Terrifying dolls are no stranger to pop culture. Just this June, the movie “Annabelle Comes Home” about an evil doll was released, and the random nature of the odd prank is similar to when creepy clowns were spotted in several states in 2016.”

Sure, it’s a prankster. That’s much better than letting the people in your county think it might be an entire army of life-sized dolls attacking the city.

Smithsonian Magazine Online wrote an article about “The History of Creepy Dolls.” Here’s an excerpt about Annabelle the doll whose story was recently made into a horror film. “But the story of Annabelle the demonic doll, however, becomes far creepier – and more titillating – when it’s accompanied by the claim that it’s “based on a true story”. Paranormal investigators Ed and Lorraine Warren claimed that Annabelle the Raggedy Ann doll, whose original owners frequently found her in places they hadn’t left her, was being used by a demonic spirit in its quest to possess a human soul; she now lives in a specially-made demon-proof case marked “Warning: Positively Do Not Open” at the Warren’s Occult Museum in Connecticut. Annabelle is not the only evil doll the museum alleges it houses, and there are many more such purportedly real-life possessed dolls around the world; as NPR reported in March, “Haunted dolls are a thing”. Robert the Doll, the lifelong companion of an eccentric Key West artist, glowers at people from the East Martello Museum, where he’s become a tiny, haunted cottage industry unto himself; you can even buy your own replica Robert doll to blame things on.”

There is actually a phobia for the fear of dolls (I bet you’re not surprised) called “pediophobia” and, not surprisingly, it’s extremely common.  Prevention Magazine did an article of this phobia – and if you didn’t have the fear prior to this, just looking at their headline photo ought to do the trick.

This is an excerpt from the article, “If you are genuinely scared by dolls and think you may suffer from pediophobia, clinical psychologist Kate Wolizky-Taylor explains that it is highly treatable, along with any other specific phobias. A treatment plan would likely involve exposure, “which is a gradual confrontation with feared stimuli,” she says. In this case, it would mean slowly coming face-to-face with dolls. Someone might start by being in the same room as a doll, and eventually work up to holding a variety of different dolls of varying creepiness in their hands.

But if dolls just leave you feeling a little bit squeamish and uneasy? You might want to just say no when one of your pals suggests binge-watching Chucky movies.”

Exposure to the feared stimuli? Coming face to face with creepy dolls?  Being in the same room as one?  No, thank you!

I think I’d rather live with the phobia!