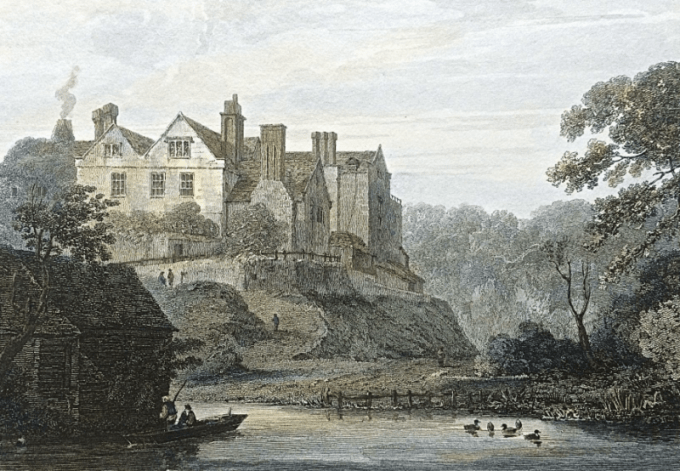 Everybody loves a good Christmas party, right?  (Okay, those of us who are introverts might not “love” them, but we can put up with them during this time of year.)  From Mr. Fezziwig’s Christmas Party in Charles Dicken’s “A Christmas Carol” to the party at the Bailey’s home to show George that indeed he had lived a wonderful life, these are parties that we all remember and hold dear to our hearts.

And have you ever wondered, when you’ve been to a large party if any of the people you are seeing out of the corner of your eye are paranormal gate-crashers? Just stopping by to reminisce?

Of course, most of our ghostly friends tend to hang around areas and parties that meant something to them in life. And, sadly, most of those memories aren’t happy ones. A couple of those parties are the subject of this week’s Freaky Friday.

Knighton Gorges Manor was one of the grandest manors on the Isle of Wight. It has a long history of violence and death. But its story probably starts way back to 27th December 1170, when Thomas Becket, Archbishop of Canterbury (also known as Saint Thomas of Canterbury) was murdered in Canterbury’s Cathedral by four knights. Hugh de Morville was one of the knights responsible for his murder. Morville escaped to his Manor – Knighton Gorges Manor – and lived there in tortured isolation. From there, the history of the Manor only continued to go downhill from there.

The ghost story of the Manor dates back to 1920. A young traveler wanted to take shelter on the night of 31st December, so he walked up the drive to the Manor, which appeared to have a party going on.

On his walk up the driveway, he heard the thundering of horses’ hooves and the wheels of a carriage. He dived out of the way to avoid being hit, only to discover there was nothing there. He could hear music and laugher and peered through the window to see people dressed in Georgian attire. Assuming it was a fancy-dress party, he banged on the door, but no one answered. Believing the music was too loud for them to hear him, he decided to walk to the next Manor for shelter. While having his meal at the next Manor, he asked about the other Manor – the one with the party. He was told that the Manor had been demolished 100 years previously and that no party was taking place.

There are many other accounts of ghostly sightings which include a coach and horses, strange lights, phantom revels, and stone gargoyle-type creatures appearing on the gate pillars. Dark shadowy figures have been seen around the grounds and there are reports of a black knight on horseback. The apparition of a woman with no face has been seen in the lane and phantom voices have been heard by the gateposts screaming “Get Out!”  Accounts of car trouble as well as feeling unwell or extremely cold are also connected with the site.

This next story is from Reddit Ghosts. And sometimes a Christmas party doesn’t have to be huge – often it’s more memorable when it’s just a party for two, like in this young man’s case.

I live in Dallas Texas and there’s a famous hotel here called the Adolphus. Which is haunted by a couple of ghosts.

The story goes that the dance hall on the 19th floor caught fire once and led to the death of a couple of people that’s why many consider the 19th floor to be the most active area. But besides that, they were also a few bellboys who fell to their deaths in the elevator shafts and a couple of murders. So, there’s potential for a lot of activity.

When I was twelve, my mother, my dad, my sister, and I went to the hotel just before Christmas since Dallas has a Christmas parade that goes just by there a couple of days before Christmas Eve. My parents both thought it be a fun little trip to spend the weekend at a fancy hotel and then to watch the parade.

Now, of course, being twelve, I was super happy and excited for the parade and even more so to explore this new hotel which I had never been to.

I still remember the day perfectly; we had just gone to the hotel, and I was drawing this little bird in my sketchbook.  We walked inside the lobby checked in and then soon headed to our room on the 14th floor. It was at this point that my mother decided to tell me about this hotel’s haunted history, which honestly really scared me. But because I’m a little rascal, I decided that it be the best idea if I went “ghost hunting” by myself.

Now you might assume that that’s quite reckless to let a twelve-year-old just walk around a big hotel by himself, but at this point in my life I would be what most would consider way more mature for my age, so my mom trusted me enough to go by myself.

It was probably about eight or eight-thirty in the evening and I was walking around the 19th floor, and I couldn’t shake the feeling that I was being followed.  I kept looking over my shoulder, but nobody was there.  I soon came up to this large window that overlooked one of the busier streets in Dallas, though I honestly can’t tell you which street.

Since it was December all the air vents were blasting hot air. And these vents near the window were no exception. I looked out the window for a couple of minutes and then suddenly, the air got freezing cold.

An overwhelming feeling, as if someone was watching me, flushed over me. I was terrified! I assumed that I was about to get kidnapped or something like that. I quickly turned around and looked at this long hallway that led to a couple of elevators.

It was down this hallway that I saw the physical manifestation of a woman. At the time I did not know this, but this woman is often known as the jilted bride. And a lot of people in the hotel do refer to seeing her at some point. And from what I was able to gather she is benevolent.

I looked down this hallway and she was near one of the elevators, walking straight towards me. She then made a quick left towards the elevator and just disappeared as if she had gotten in.

As you can assume I was petrified in fear, and in all honesty, I believe that my eyes were playing tricks on me. But to this day I still believe in what I saw and every time I talk about the story my throat tightens and it’s hard for me to get the words out. It’s almost as if I’m being choked, not hard, but it always feels as if there’s a presence there.

I don’t know, I just feel like this experience was too real to not be a genuine one. To any of my other Dallas people have you guys ever seen the jilted bride????

So, I had to do a little research on the jilted bride and found this article from the website Dallas Terrors. This is what they say about the hotel:

“Undoubtedly the most infamous spirit to haunt the hall of the Adolphus is the ghost of a young bride-to-be, who arrived in Dallas for her wedding in 1935. The guests gathered inside the hotel’s ornate ballroom on the 19th floor and waited for the bride to make her way down the aisle. Yet the groom was nowhere to be found. The wedding party waited for hours, but the groom never arrived. Heartbroken and utterly humiliated, the bride fled the scene. Hours later, her body was found hanging just a few feet above the altar where she was set to take her vows.

Ever since that fateful night, guests staying on the 19th-floor report hearing a woman crying, footsteps running up and down the hall, and even the sound of a rope creaking under the strain of a body. Staff and guests of the hotel report an eerie feeling of being watched, or of a presence in the room with them. The bride’s spirit has been spotted wandering the halls after events and parties, still wearing her white dress and veil. Maybe the jilted bride-to-be searches for her long-lost groom, or perhaps a new one, among the guests.”

Nothing says Happy Christmas like a faceless woman who screams “Get Out,” a morose knight who still throws a happening Christmas party, and a jilted bride who is still looking for her errant groom.

What kind of ghosts do you think are coming to your Christmas party this year? Will you even realize they’re ghosts when they show up? And before you get upset about the idea of having spiritual visitors for Christmas, remember, Old Saint Nick is just a ghost too!