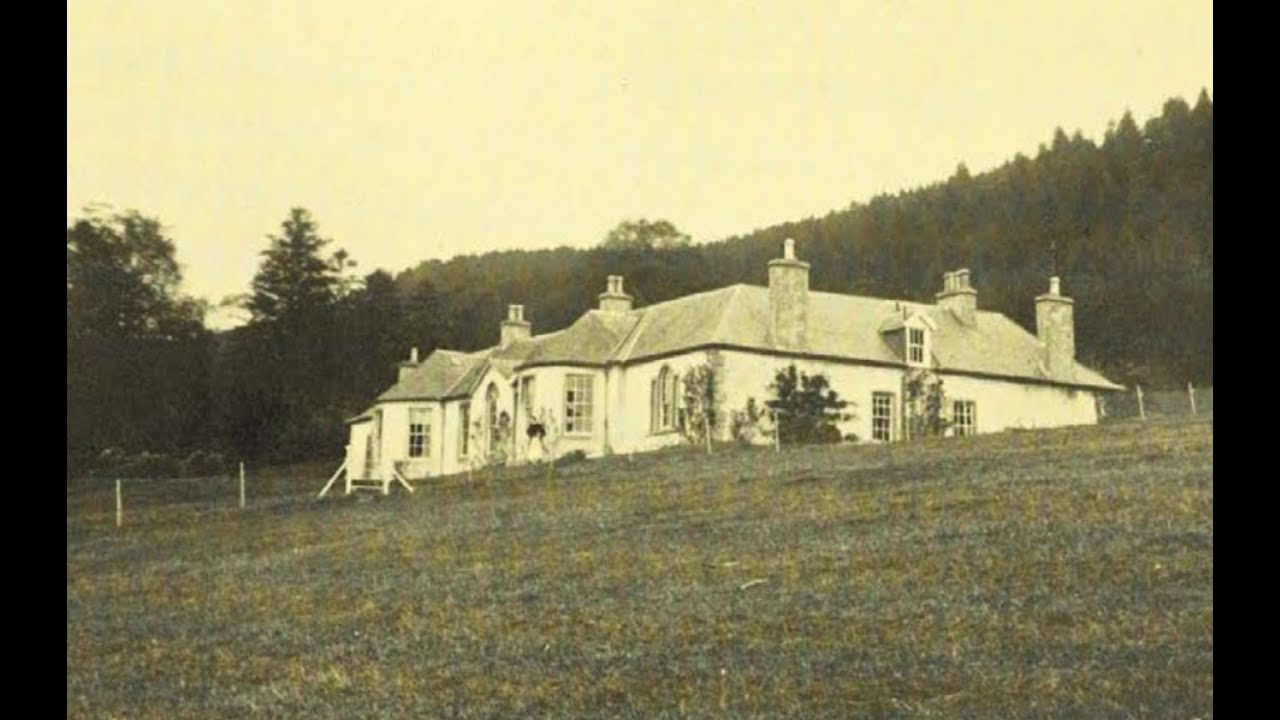 First, the house sits on the shore of Loch Ness. Yes, that Loch Ness – famed for its sightings of Nelly the Loch Ness Monster. But that’s not all that’s paranormal about this resident. However, I’m getting ahead of myself.  Let me give you the listing details from the realtor, Galbraith Group:

“A unique renovation project on the shores of Loch Ness.

LOT 1 – The remains of a B listed Georgian house of historic note.

LOT1
Formerly a gracious B listed Georgian house of historic note, Boleskine House was predominantly destroyed by fire in 2015, and today the main walls with echoes of its former splendour are all that remains. The opportunity now exists to restore the house and grounds to create an outstanding property subject to obtaining the necessary consents.
The house sits in approximately 9.3 hectares comprising formal gardens (now overgrown), grazing land and mature woodland.”

Now let’s talk a little about the echoes of its former splendor.

According to Wikipedia the parish of Boleskine was formed in the 13th Century. A Kirk (the Scottish word for church) and graveyard were built in the parish around this time. A succession of Ministers ran Boleskine Parish and would travel the area on horseback or on foot in all weather conditions. Minister Thomas Houston (1648-1705) was said to have had the task of hastily laying animated corpses back in their graves after a devious local wizard had raised the dead in Boleskine graveyard.

According to “The Boleskin Bulletin’s” Autumn 2004 edition, “A succession of Ministers took charge of the parish, and it was a thankless task involving traveling the area by foot or on horseback in all weathers. Thomas Houston (1648 -1705) was noted as having to contend with a notorious wizard – AN CRUINAIR FRISEAL (the Fraser Crowner or maker of circles, as wizards do) who had raised the bodies in the churchyard and Thomas had to make haste to lay them to rest again. He also had to deal with Lochaber Robbers, “armed with naked swords and dirks” who raided the area and stole cattle.”

Being a Minister was a tough job in those days! “Sorry, dear, I can’t write my sermon tonight because I have to rebury those animated corpses and deal with those naked swords again.”

But, the church itself did not have a happy ending. According to an article in the Scotsman, “According to legend, a church once stood on the ancient site. When it caught fire, the congregation was trapped inside and burned alive. The nearby Boleskine Burial Ground is notable for the remains of the original chapel and a grave watcher’s hut: the grave watcher was employed to prevent body snatchers from defiling the graves.”

At least the bodies were no longer animated.

A house was built on the property in 1760 because really, nothing says home and hearth better than a lot with the remains of a graveyard and burnt-down church. It was built as a hunting lodge for Colonel Archibald Fraser and stayed in the family until 1830.

Then, in 1899, Boleskine House was purchased by Aleister Crowley, an English occultist, ceremonial magician, poet, and novelist. Crowley purchased the house because he believed the location was ideal for performing the Sacred Magic of Abramelin the Mage, a spell taken from a grimoire called “The Book of Abramelin.”

Wikipedia notes, “According to Crowley, in his book The Confessions of Aleister Crowley, in order to perform the operations, “the first essential is a house in a more or less secluded situation. There should be a door opening to the north from the room of which you make your oratory. Outside this door, you construct a terrace covered with fine river sand. This ends in a ‘lodge’ where the spirits may congregate.”

The purpose of this ritual is to invoke one’s Guardian Angel.

It requires at least six months of preparation, celibacy, and abstinence from alcohol. However, it also includes the summoning of the 12 Kings and Dukes of Hell, to bind them and remove their negative influences from the magician’s life.”

Sounds like a cunning plan, doesn’t it?  Unfortunately, while Aleister was in the midst of all this summoning, he received a summons himself. He was called to Paris by the leader of the Golden Dawn, (an organization devoted to the study and practice of the occult, metaphysics, and paranormal activities during the late 19th and early 20th centuries.) And, when the leaders of the Golden Dawn call, you answer!  And, in his hurry to answer the call, he never banished the demons he had summoned.

Aleister once claimed that his experiments with black magic simply got out of hand. (I hate when that happens.) And there have been strange happenings occurring in and around Boleskine House ever since. Okay, that’s not totally fair, the whole animated corpses thing could have been considered a strange occurrence, and that happened way before the whole “summoning demons” thing.  But we do have to remember; the corpses only became animated because of that devious local wizard!

What are some of the strange occurrences associated with the house? I’m glad you asked!

Atlas Obscura lists these occurrences of proof of an otherworldly influence:

“First, Crowley’s housekeeper’s 10-year-old daughter and 1-year-old son died mysteriously and abruptly. Crowley also bragged that one employee of the estate who had long abstained from alcohol got drunk and attempted to murder his entire family. After the house had changed hands, it still wasn’t free of dark energy. In 1965, the army major who owned the house committed suicide by shotgun.

The next owner was another dark celebrity of a different kind–Led Zeppelin’s Jimmy Page. Page spent very little time at the estate, instead, bequeathing it to a friend and his family. The friend reported not minding the unexplained creaks, groans, and various ghostly apparitions, but was bothered by the Crowley and Page fans who frequently attempted to break into the house and defile the grounds.

Later owners dismissed any notions of hauntings or witchcraft at the house, but tragedy continued to strike. In 2015, the residents of the house returned from a shopping trip to find the house completely in flames. There were no injuries, as the house was totally empty when it ignited.”

However, author Lance Gilbert felt there was more to the house than what was reported. In his book “The Led Zeppelin Curse: Jimmy Page and the Haunted Boleskine House” he offers more evidence that evil might have made a home in that structure. Here’s a description of the book, “There has long been a rumor that three of the four members of Led Zeppelin (Jimmy Page, Robert Plant, and John Bonham) cast witchcraft spells utilizing occult demons to sell their souls for fame and fortune. The legend of the Led Zeppelin Curse emerged in the late 1970s after multiple accidents, deaths and other bad luck began to plague Jimmy Page, Robert Plant, and John Bonham.

Led Zeppelin founder Jimmy Page was known for his intense interest in the occult magic spells and sex magick rituals found in the magick studies books of notorious occult demons’ magician, Aleister Crowley. It’s been said that Page practiced Aleister Crowley’s sex magick techniques with groupies while on tour. Evidence of Page’s interest in magick studies can blatantly be found in the album, Led Zeppelin iv. Known as the most overtly occult of their albums, Led Zeppelin iv contains symbolism which could be related to occult demons. Instead of an album name, Led Zeppelin iv contains four symbols, each representing band members Page, Robert Plant, John Bonham, and John Paul Jones.

So, what is the culprit of rock music’s most notorious curse of all? This occult, supernatural, nonfiction book ties together all the details of this enduring mystery (including an analysis of Led Zeppelin iv) involving one of the most popular rock music styles which gave birth to guitar music’s very own heavy metal!”

So, if you decide that Boleskine House is the home for you, may I make two little suggestions? One – brings lots and lots of white sage for cleansing. And – two – get really good fire insurance.