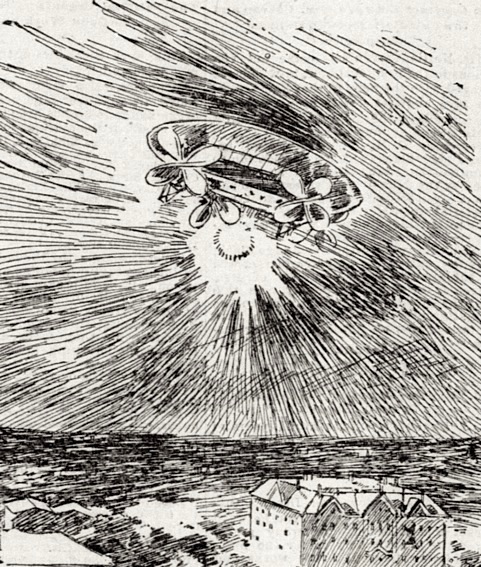 I had the distinct pleasure of speaking to a wonderful group of students, teachers, and administrators this week at the FOCUS House in Rochelle, Illinois.  During our time together, we started chatting about ghost stories (are you surprised?) and several young men shared stories about a ghost that haunts their residence hall. A ghost who has the annoying habit of shutting down the close-circuit cameras just before she appears.

So, this week, as I thought of my Freaky Friday, I knew I had to feature something about Rochelle.  I was hoping I would be able to discover the name of the church and the convent (that is now the residence hall) in some old records. But so far, that information has evaded me. However, I did find this interesting article from the Rochelle Herald dated April 7, 1896:

Think They Saw an Airship

“Rochelle, Ill., April 5. – The mysterious airship that has been seen at various points in the last few weeks made its appearance here Saturday night. About 7:30 o’clock some one discovered a bright object coming toward the city from the southwest. Soon the news spread and hundreds of people were watching the strange object.

When first sighted it did not have the appearance of being more than a few hundred feet above the earth.  As it came closer it appeared to rise higher. It traveled quite slowly at times and again would move quite fast.  It was in sight from this point about thirty minutes before it disappeared in an easterly direction.

Glasses of all kinds were used to try and discover if possible the outlines of the strange ship, but all in vain. Some had the idea that they could hear a noise coming from the ship. Some went so far as to say that it was human voices, while others say that it was the sound of machinery.

Chicago Inter Ocean – There is no question but that several glasses were used before any person was in shape to see the airship that passed over the city last Saturday night. We would recommend to those seeing the ship to try bromides for a time at least.”

Just for your information, and because I had no idea, bromides were used during that time period as a sedative to calm someone’s nerves.

It surprised me to discover that Rochelle wasn’t alone in its viewing of extraterrestrial aircraft, but it was one of the first sightings in the United States. Wikipedia offers us these cases:

The Sacramento Bee and the San Francisco Call reported the first sighting on November 18, 1896.  Witnesses reported a light moving slowly over Sacramento on the evening of November 17 at an estimated 1,000-foot elevation. Some witnesses said they could see a dark shape behind the light A witness named R.L. Lowery reported that he heard a voice from the craft issuing commands to increase elevation in order to avoid hitting a church steeple. Lowery added, “in what was no doubt meant as a wink to the reader” that he believed the apparent captain to be referring to the tower of a local brewery, as there were no churches nearby.

Lowery further described the craft as being powered by two men exerting themselves on bicycle pedals. Above the pedaling men seemed to be a passenger compartment, which lay under the main body of the dirigible. A light was mounted on the front end of the airship.  Some witnesses reported the sound of singing as the craft passed overhead.

(Hmmm, sounds a little like a Close Encounter of the Third Kind, doesn’t it?)

The November 19, 1896, edition of the Stockton, California, Daily Mail featured one of the earliest accounts of an alleged alien craft sighting. Colonel H.G. Shaw claimed that while driving his buggy through the countryside near Stockton, he came across what appeared to be a landed spacecraft. Shaw described it as having a metallic surface that was completely featureless apart from a rudder and pointed ends. He estimated a diameter of 25 feet and said the vessel was around 150 feet in total length. Three slender, 7-foot-tall (2.1 m), apparent extraterrestrials were said to approach from the craft while “emitting a strange warbling noise.”

The beings reportedly examined Shaw’s buggy and then tried to physically force him to accompany them back to the airship. The aliens were said to give up after realizing they lacked the physical strength to force Shaw aboard. They supposedly fled back to their ship, which lifted off the ground and sped out of sight. Shaw believed that the beings were Martians sent to kidnap an earthling for unknowable but potentially nefarious purposes. This has been seen by some as an early attempt at alien abduction; it is apparently the first published account of explicitly extraterrestrial beings attempting to kidnap humans into their spacecraft.

In 1868, Charles Fort cited a mystery airship sighting in Copiapo, Chile. It was described as a gigantic, shining bird driven by a noisy motor.

In a variation of the usual airship, on July 29, 1880, two witnesses in Louisville, Kentucky saw a flying object described as “a man surrounded by machinery which he seemed to be working with his hands” with wings protruding from his back.

Merely a month later, a similar sighting happened in New Jersey. It was written in the New York Times that “it was apparently a man with bat’s wings and improved frog’s legs… the monster waved his wings in answer to the whistle of a locomotive.”

There were a number of mystery airship reports from the East Coast of the U.S. in 1887.

There was a series of mystery airship sightings in 1909 in New England,[23] New Zealand, and various European locations. Later reports came from the United Kingdom in 1912 and 1913. However, by this time airship technology was well advanced (Count Ferdinand von Zeppelin had been flying his massive passenger-carrying airships for nearly a decade by then), making the prospect that these may have been small, private airships rather than evidence of extraterrestrial visitation or newspaper hoaxes more reasonable.

What did the good folks of Rochelle see that night?  A flying saucer? Some magnificent men in their flying machines?

We may never know. But, Rochelle, Illinois may be able to stake the claim, “It happened here first!”