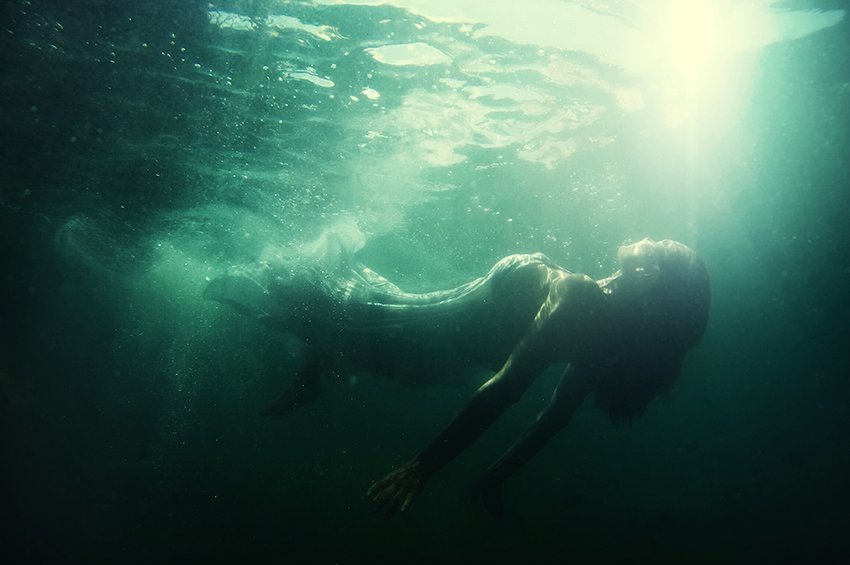 I’m sitting in my attic office with the window air conditioning going full-blast and a small box fan blowing at me too.  My sweet, devoted dog (who refuses to go downstairs where it’s cooler) is laying in front of the air conditioner, soaking up as much cool as he can.  The temperature outside is a balmy 87 degrees. And I’m dreaming about wading into a rushing mountain stream, or a cool, forest lake, or a babbling brook. Anything cold, wet and secluded. But then, as I’m dreaming about this magical place my mind takes things to a darker and spookier place. I mean, what good is a secluded place without a ghost, right?

I hope you enjoy these haunted bodies of water.

WFAA in Texas did a story about a lake near Dallas that has a story surprisingly similar to Chicago’s Resurrection Mary. Here’s what they say:

“Drive around White Rock Lake and you might see it for yourself: A young woman in a drenched evening dress flags down your car, explaining that she was just in a boating accident. She asks for a ride to a home on Gaston Avenue and gets in the back seat. And then, just as mysteriously as she appeared, she vanishes.”

The Advocate Magazine gives us a little more information about the ghost. “The beginning of her celebrity is murky, and there are very few facts to support the story (which experts say is a variation of the very common vanishing hitchhiker urban legend). The first reference apparently came in 1943, in a publication of the Texas Folk Lore Society, which was affiliated with the University of Texas. The society’s version of the story was popularized by Dallas newspaperman and chilihead Frank X. Tolbert, who wrote about it frequently:

A couple is driving down Garland Road in the early 1940s when they notice a beautiful young blonde woman in a white dress by the side of the road, soaking wet — hair, dress, everything. They stop, pick her up, and she gives them an address on Gaston Avenue. They drive to the address, but when they arrive, the girl, who had been sitting in the back seat, is gone. All that remains is a damp spot where she had been sitting. They’re confused, so they go up to the house. The man who answers the door says that he did have a daughter, but that she had drowned in the lake two years earlier. The Tolbert re-telling doesn’t say how she drowned, but typically, it was in some sort of car accident.”

Let’s go all the way across the world to check out our next haunted body of water — Devils’ Pool near Babinda, Queensland in Australia.  News.com.au shares the creepy story with us: “Aboriginal legend has it that a young woman jumped into the Devil’s Pool, better known as Babinda Boulders, after being torn from her lover.

Rather than never experience true love again Oolana leapt to her death in the pool and is said to still be searching for her true love Dyga today and still luring young men to their deaths in the pool.

Some claim to have photographed the ghost in the waters, others say there is a more pragmatic reason for the 16 deaths of young men there in the past 50 years.

Tasmanian James Bennett, 23, and three friends had walked beyond the safety rails to sit in the churning water of the highly oxygenated pool locals call Washing Machine.

Mr. Bennett was swimming in calmer water when all of a sudden one of his friends saw him get pulled backwards, as if by an invisible hand, towards white water at the downstream end of the pool. His friend told Coroner Kevin Priestly in 2010 that Mr. Bennett reached up to grab a branch which snapped. Moments later his head went under the water.

His friend could see him struggling under the churning white water. Only the tips of his fingers from an extended hand protruded just above the surface. His friend moved to a closer position and extended his leg so Mr. Bennett might have something to hold on to, but no contact was made.

Mr. Bennett struggled once or twice and then disappeared.

That was the last time he was seen until his body floated out of the notorious stretch of water at The Boulders three days later on December 2.

The water, even when low, still has enough force to suck people, ­especially children, into the tunnels of rock and hold them under.

Babinda SES member Dulcie Schnitzerling talks about the bravery of the divers who search for bodies. They are attached to land by the rope, but they are entering a dangerous world where they themselves could be trapped by fast water and pinned against a rock under the water.

“They find the bodies jammed under logs or rocks. Sometimes the bodies are spinning around in the white water,” Ms. Schnitzerling said.

“When they go into the Chute they just keep going around like they are in a washing machine.””

Not only haunted, but also very dangerous!

Now, back to the good, old USA for the next waterway. Manchac Swamp is not only haunted, but there might also be some Cajun werewolves hanging around it too! Destination Strange gives us the low-down: “Louisiana is no stranger to spooky stories, and Manchac Swamp is one with its roots anchored in the past. The Big Bad is a resident ghost, and once practicing voodoo priestess, Julia Brown. In life, Julie wasn’t the nicest of neighbors, and it wasn’t uncommon to see her rocking back and forth on her porch, giving anyone that passed the evil eye.

One of Julia Brown’s favorite pastimes was to predict the destruction of the neighboring towns. They called her the oracle because if something bad was going to happen, Julia Brown already knew about it.

One of her most terrifying (and infamous) predictions came true in 1915, on the day of her funeral. Just before she died, Julia was heard singing over and over again…

Turned out the prophecy (or curse) was true, and as the town was putting her body in the ground, a devastating hurricane ripped through the area, completely destroying three villages and killing hundreds of people. Even today, it’s not uncommon for a body to surface and drift down the murky water.

Many people interested in seeing if they can experience the ghost of Julia Brown have made the trip to Manchac Swamp, and more often than not they leave believers. It’s not uncommon for the swamp to suddenly be filled with the loud screams of a woman’s voice or even the sound of Julia singing her terrible song.”

Not quite “On Golden Pond,” right?

But not every ghost is bad. There are some downright helpful ones. Like the Gray Man at Pawley’s Island, South Carolina. Coastal Living tells us a little about him and this haunted beach. “The story behind the haunting of Pawleys Island varies. Some say that the ghost, known as the Gray Man, is the spirit of a young man who was bucked from his horse and drowned in the surf on Litchfield Beach on his way to visit his fiancé back in 1822. Others say he got trapped in quicksand as he and his horse went through the marsh. And still others say the man in question was actually Edward Teach—that’s Blackbeard!

The legend goes that after his death, the Gray Man saved the woman he loved and her family by warning them of a coming storm. Since then, he’s appeared to warn locals before several major hurricanes. People who’ve seen the Gray Man describe him as a mysterious figure dressed (obviously) all in gray, who wanders the beaches the night before a major storm or hurricane.”

In the past 200 years, five hurricanes have hit the shores of Pawleys Island, Yahoo reports. Hurricane Hazel in 1954 and Hurricane Hugo in 1989 claimed an estimated 119 lives between them. According to locals, the Gray Man appeared before each of the five storms.

So, I’ve talked about a pond, a pool, a swamp, and a beach. I guess all we need now is a river.

One of the least known ghosts in the area, the woman in the water, has been described as a deathly pale woman with long jet-black hair. The few people who managed to escape her clutches first smelled rotten flesh right before she re-surfaced and tried dragging them to their deaths.

One account says that the ghost of Blackwater River isn’t limited to the river. Apparently, she grabbed a man’s ankle from within a puddle as he ran away from her. He was lucky. You may not be. So, stay safe at the Blackwater River State Forest.”

So, suddenly my office isn’t quite as warm as it was, there is a definite cold chill in the air. And, the swimming pool doesn’t seem as inviting as it once did. Actually, neither does the idea of a relaxing bath.

I think I’m going to stay away from water for a little while.