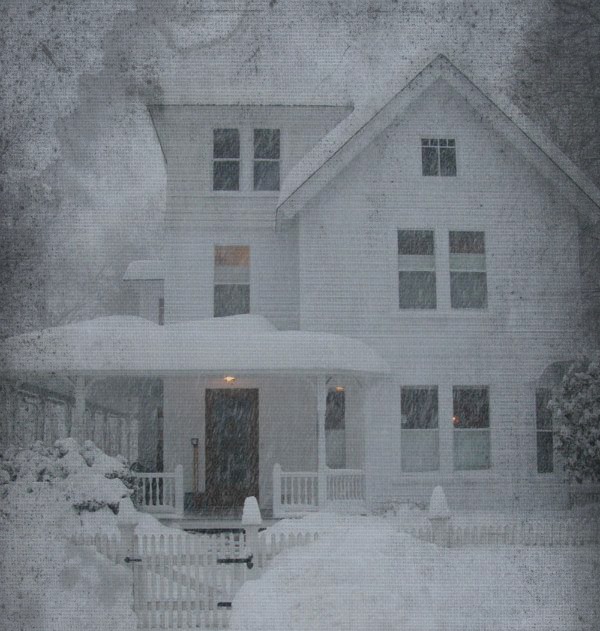 On Wednesday night, I was home alone making chicken soup and chili. (Not combined – two separate dishes.) I had them both simmering and thought I’d run upstairs to my office in the attic, download the latest copy I had on the new Mary book that’s coming out next week, and work on it on my laptop downstairs.

So, I jogged up both flights of stairs and stuck a memory stick into a USB port and saved the story to it.  Then I quickly read through some emails and decided to answer a couple.  Brodie, my Bernese Mountain dog, is my shadow, and wherever I am, he wants to be.  But he has a hard time with the steep attic steps.  So, he normally stands at the bottom of the staircase and cries – loudly – until I walk to the top of the steps and give him LOTS of encouragement to come upstairs.  This process can take up to ten minutes (I’m not kidding.) So, instead of taking the time to do it, I just called down to him.

This went on as I downloaded the document, sent a couple notes to my mom, began the process of closing down my computer, and cleaned the area around my desk. And Brodie continued to whine and cry at the top of his voice.

It was during this commotion that I heard a man’s voice say something like, “For goodness sake, just knock it off already.”  And I smiled, thinking that my husband, who had been at our church for meetings, had come home early.  And, miracle of miracles, Brodie had stopped crying and walked away from the bottom of the steps.

I picked up the various things that I had to carry downstairs; a couple cups, a plate and a bowl, my phone, the memory stick and my water bottle.  Then I turned off the lights and headed downstairs. I looked around on the second floor, no sign of my husband. But I wasn’t worried – he was probably in the kitchen. I headed to the kitchen, my arms filled with dishes, and he wasn’t there either. Weird.

I put the dishes in the sink and then looked out the side window – his truck wasn’t parked outside and the motion-detector light on the side of the house wasn’t on. I was the only one home – well, in a purely corporal way.  I tried to look at it logically – I did have the television on in the kitchen, but that’s two stories away from the attic and on the other side of the house.  And, I didn’t hear the television again until I got on the first floor.

Was it my imagination?  Well, I have to admit, I have a pretty active imagination.  But, would my imagination make Brodie stop whining and walk away from the stairs?

Now that I think about it, I may have stumbled across the answer to an age-old question.  How much noise does it actually take to wake the dead?

So, for the rest of this Freaky Friday, I thought I’d share some vintage Freaky Friday stories about some of the other odd things that have happened in this house.  I hope you enjoy them!

As my children have gotten older, one of the new traditions we have during the holidays is the drive out to Idaho to take them back to college.  Since we have family in Idaho and Utah, we take this opportunity to meet with them and catch up.  We have been lucky enough, in the last few years, to have someone stay at our house to take care of the dogs, cats and chickens.

One year, one of my older sons volunteered to take care of our home.  We actually put the dogs in a kennel, because he was working in a nearby town and couldn’t get home to let them out often enough. But, he promised he would stop by and feed the chickens and the cats every day.  For some reason, we decided to leave in the evening hours and my son and his girlfriend came by to see us off.

He had been teasing his girlfriend about the ghosts we had in the house, and he thought he would be able to spook her. So, once we were on the road, he turned off the lights in the house. Locked the back door and then stood in the front hallway with her.

“I’ll see if the ghosts will do something for you,” he said to her.

“No. It will be fun,” he said and then he turned and called back into the darkened house, “Hey, ghosts, why don’t you show yourselves? Why don’t you do something?  Come on, I’m not afraid.”

Suddenly there was a sound like a bowling ball dropping from a closet shelf onto the floor in one of the upstairs bedrooms. The problem is, we don’t have a bowling ball.

Then the kitchen light turned on and off several times.

After that, a shadowy figure floated past the doorway in front of them that led into the living room.

My son, pushing his girlfriend behind him to protect her, rushed her to the front door and out to the safety of the dark night.  He locked the door and made sure he didn’t look back into any of the darkened windows for fear of what he might see.  For the next ten days, when he came to take care of the cats and chickens, he made sure it was in broad daylight.

He arrived at the house soon after we got home and told us about his experience. Being good parents, we sympathized with him and agreed it must have been frightening. Although, we had to acknowledge, they did exactly what he asked them to do.

What’s the old saying? Be careful what you wish for…

Another time, my son invited a friend to spend the night.  They both stayed up way too late and had decided to sleep on the couches in the living room.  The next morning, his friend relayed his spooky experience. He had been sleeping soundly when suddenly he woke up, feeling strange. The room was dark. (We live in the country, so there are no street lights to illuminate the night.)  He looked around until his eyes adjusted to the dark and he could make out the various pieces of furniture in the room.  A movement, a slight flash, caught his eye and he turned to look at the coffee table about six feet away from the couch.  In the middle of the coffee table were his car keys that he had put down earlier that evening. In heart-stopping amazement, he watched as his car keys slowly moved themselves across the table and finally landed with a crash onto the floor.  He told us he stared at the keys on the floor, thought about what probably moved them, and decided it was better to just pretend he didn’t see what just happened.  Instead, he decided to pull the covers up over his head, turn away from the table, and go back to sleep.